Why is binding energy the difference between ∆G catalyzed and ∆G uncatalyzed?

I think the title explains it pretty well -- I'm confused on what 1) exactly binding energy is 2) and why it's the difference. Like in this diagram: 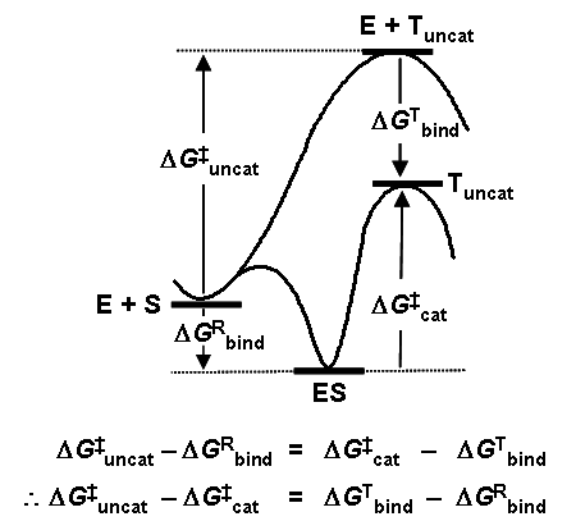 my teacher sort of said it was the energy the enzyme uses to make interactions to the substrate, but that doesn't really click for me.

The two equations at the bottom are derivable from this definition of free energies as a state function. You know that the free energy difference between the $ES$ and the $E+T_{uncat}$ state is the same regardless of the path you take. So if you go first through $ES$ the free energy change ( $- \Delta G_{bind}^R + \Delta G_{uncat}^\ddagger$) will be equal to that if you go through "$T_{uncat}$" ($\Delta G_{cat}^\ddagger - \Delta G_{bind}^T$) - you don't necessarily need to have physically realizable reactions for the state function property to hold. The second equation is then simply a rearrangement of the first.

This sort of thermodynamic analysis is what leads to the "transition state stabilization" hypothesis of how enzymes work: enzymes speed up reactions because they bind to the transition state more tightly than the substrates or the products.

Not the answer you're looking for? Browse other questions tagged enzymes or ask your own question.

3
Questions regarding ELISA
4
What does “kcal/mol” mean when speaking of enzyme catalysis?
5
What is the difference between a phosphotransferase, a phosphatase, a phosphorylase and a kinase?
4
How do catalase and other antioxidants neutralize free radicals?
2
Difference between negative allosteric regulation and non-competitive inhibition
2
Will amylase inhibitors affect the colorigenic reaction between starch and iodine?