What are these two fruit flies doing?

When taking some pictures I accidentally captured two fruit flies doing this:

The photos are unfortunately blurry, but from what I can tell, one fly approaches the other from behind, and something is then retracted/pulled into the front fly's body. I'm guessing it has to do with reproduction, but it doesn't look like the fruit fly mating I've seen before.

Here are some stills from the sequence: 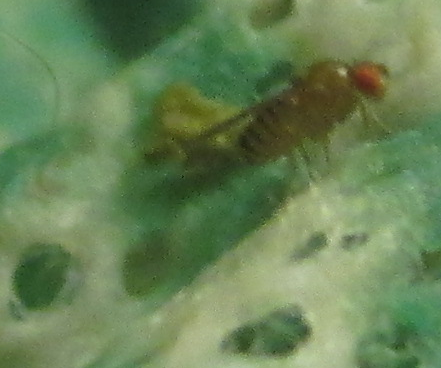 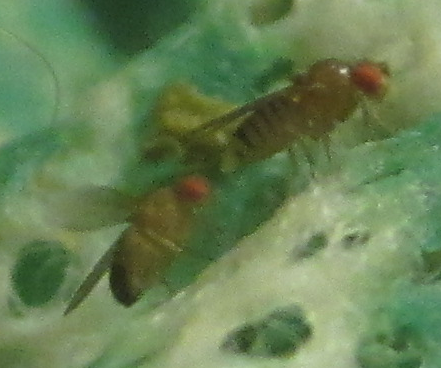 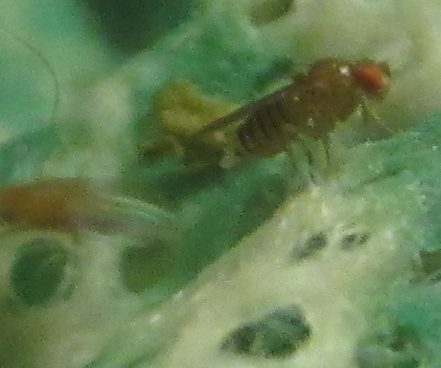 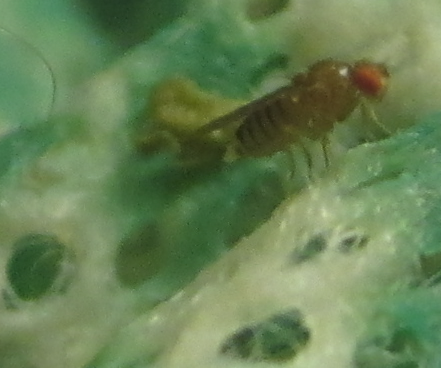 I've been working on fruit flies now for 7-8 years, including a lot of large mating and courtship assays. I believe what you are seeing is the male (identifiable by the black end of the abdomen and different shape) approaching a female. Judging by the extension of the male's right wing in the second still image, he is making a brief courtship attempt, but its very difficult to be certain of that from these images. The female then extends her ovipositor.

I believe that this could be one of two things:

I've seen it happen enough times both with females subject to courtship and females not subject to courtship to think that either of those is plausible for what is happening in your clip. Given the possible courtship by the male and the following text & videos from a recent paper I would say it is option 1, a mate rejection.

"Recently mated females reject courting males through a variety of actions such as decamping, flicking their wings, kicking the approaching male, or extrusion of the ovipositor [8]. Thus, copulation switches female behavior from acceptance to rejection." - Kimura et al. 2015

"Under natural conditions, the recently mated female occasionally extends the ovipositor straight along her body axis (anterior-posterior axis) toward the courting male (Fig 1A, S1 Movie), who usually positions himself behind the female [21]. During the ovipositor extension, the female abdomen was width-compressed throughout its entire length. We refer to the ovipositor extension as mating-type extrusion when it was protruded horizontally along the female body axis. A mated female that has found a suitable site for oviposition will lower and bend her abdomen downward and insert the ovipositor into the substrate before performing movements to expel an egg that is inserted into the substrate (Fig 1B, S2 Movie) [9]. Unlike the extrusion for rejection, the female narrowed the abdomen only at its posterior part." - Kimura et al. 2015

In figures S1 and S2 you can see those two behaviours very clearly in videos.

Note, I came to my answer before finding this Kimura paper so that's two lines of independent evidence (my experience and their paper). I hope it answers your question.

9
Bee (?) identification
3
Can fruit fly larvae eat plastic?
1
Are these fruit flies really coming back to life after being frozen?
2
Is this a type of fruit fly?
6
What is this yellow sticky excretion from a moth? Details in photos
1
What types of spider and caterpillar are these, and what are they doing?