Does increasing the value of k in k-fold coverage requires more memory?

Here is what is k-fold coverage which is know as sequence coverage.

According to this, 2-fold coverage means the whole DNA is sequenced more twice in average.

If I have a genome sequence of length x with 30-fold coverage, then which of the following is correct?

In Next Generation Sequencing (or better called 2nd generation sequencing) you are sequencing many many small genome fragments cut from many DNA molecules. Multiplying molecules, cutting them into fragments and amplifying them is known as library preparation (library of fragments to be read). During that process (of which PCR is important procedure) different errors or biases could be introduced.

What you get from a sequencer is many many short reads in form of FASTQ files that you need to assemble into genome sequence (by de novo assembly or more commonly by alignment to reference genome). It is important to know how sure are we for each nucleotide in assembled genome, which depends on how many times (and with what quality score) sequencer read each nucleotide (see image below). 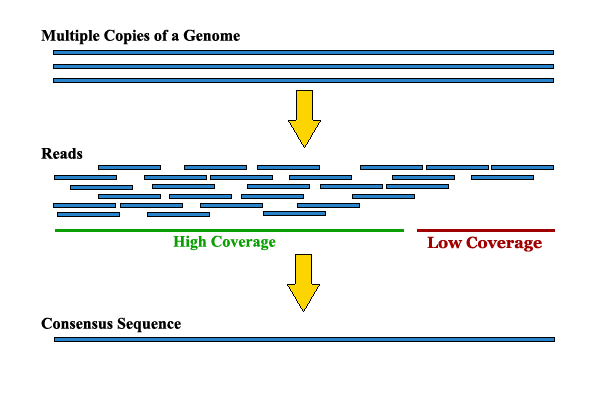 Coverage could mean average coverage across whole genome or coverage of some smaller portion of it (different coverage across genome is usually because of mentioned biases introduced in library prep).

NOTE: Coverage is even more ambiguous term that I just described, so you should look at this thread for possible different meanings (for example: which portion of whole genome is covered by sequencing).

Not the answer you're looking for? Browse other questions tagged bioinformatics dna-sequencing or ask your own question.

3
Any tool to align whole genome sequence data to another genome and give exon regions a higher mark?
4
Detecting cancer or a genetic predisposition based on DNA sequencing
7
introduction to Chip Seq
1
Whole Genome Sequencing and Chromosome Counts
0
Where can I find a file listing the genetic differences in humans?
88
Does the string “…CATCAT…” appear in the DNA of Felis catus?
0
How to find sequencing data of a specific drosophila strain
1
What does it mean by “end effects can be ignored”