How can neuronal signals faithfully be reproduced by scalp electrodes?

There is a skull barrier (and possibly other layers too) between the brain and the scalp. I have seen people trying to extract EEG signals from the scalp by connecting electrodes and interface it to other devices. But how do these weak signals pass through these many barriers and reach the scalp electrodes? Also, "scalp cells" will have their own dynamics, right?

I simply don't understand how can we even get a approximate measure of electrical signals inside brain from scalp. 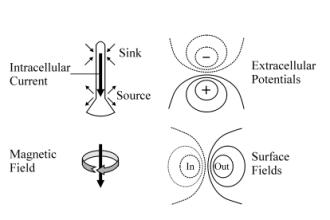 Fig. 1. Electrical field generated by a neuron (top) and the correspodning electromagnetic field (bottom). The former is detected with EEG, the latter with MEG. Source: Picton (2002)

The intervening tissues (dura mater and the skull) are not very conductive and indeed cause those potentials to be weakened. Worse, still, the electrical fields diffuse on their way to the scalp, meaning that adjacent patches of neurons cannot reliably be distinguished at the scalp. In other words, the spatial resolution of the EEG is very poor. The small amplitude of the potentials simply needs signal amplification to make them measurable. However, as @user49102 points out nicely, background noise is amplified with it. Hence, the magic hat of an electrophysiologist may be needed to extract the signal on the scalp from the noise by using noise reduction techniques such as signal averaging and filtering. A notable example where signal averaging is used is the event-related potential, or ERP. A stimulus (e.g. a flash of light) is repeatedly presented and the time-locked EEG is repeatedly measured and averaged offline. The random noise is reduced by the averaging process and neat ERP responses can be extracted without much filtering needed. A specialized example is the visual evoked potential, or VEP (Fig. 2): 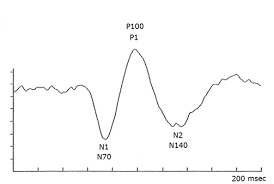 Your question whether scalp cells (skin cells) have their own electrical responses - Well yes and no. The skin cells do not generate action potentials and feature only steady membrane potentials. Hence, if they are picked up by the electrodes it will only generate a stable offset, i.e., a baseline shift. Nothing to worry about. Neurons feature active potential differences through their action potentials, and that is what is picked up - voltage differences.

The low spatial resolution and weak signal means that the activity of single neurons cannot be measured. Instead, the gross signal from many thousands of neurons is collectively measured. In turn, when those neurons fire randomly, they will cancel each other's responses out and little signal is obtained. The most robust responses are obtained when the brain generates synchronized oscillatory potentials, for example during slow-wave sleep (Roth, 2009).

While EEG has poor spatial resolution of EEG, it excels in the temporal domain. Responses of a few milliseconds can be measured reliably (Fig. 2). As a comparison, fMRI has a temporal resolution in the order of seconds.

EEG has been recorded beginning in the late 20s, by people who were fairly clueless about electricity. While the strength of the EEG is indeed weak, it is readily observable with even such comparatively primitive technology.

The first thing you should take note of is that EEG measures the aggregate field. It does not see single neurons. It sees the synchronized activity of large neural populations of neurons - tens, hundreds of thousands of neurons at the very least, and probably more on the order of tens and hundreds of millions of neurons. This aggregate activity creates activity on the order of microvolts. This activity is then relayed (via the differential amplifier technique) to a powerful amplifiers. Modern EEG amplifiers have very large input impedances, and are thus able to amplify these weak signals. However, it still only observes mass action of large groups of neurons, not e.g. single action potentials by single cells.

Next, direct EEG analysis is comparatively uninformative for many reasons, including those you mention: that the scalp, the skull, and the other intervening tissue attenuate the signal. Thus, very often, extensive preprocessing is applied, such as averaging over many recordings. However, at least two features are already visible in the waking EEG. The first is the power-law structure of the frequency spectrum (although this is reinforced by the filtering characteristics of the tissue; the tissue filters higher frequencies more than lower ones). The second is the alpha wave, which is a large activity pattern coming mostly from visual areas. However, this is a very coarse feature; it tells us little beyond if the subject has their eyes open and is attentive, or has them closed/is inattentive.

Lastly, it is indeed generally assumed that deep sources (such as subcortical areas) are not picked up by the EEG (but only by e.g. MEG).

A good introduction to the topic is the book Electroencephalography by Niedermeyer and Lopes da Silva.

Not the answer you're looking for? Browse other questions tagged neuroscience brain biophysics electroencephalography or ask your own question.