Why would BLASTP (Basic Local Alignment Search Tool) be a poor tool to search for motifs in protein sequences?

Because it has a poor statistical model. It's basically a local alignment tool aided by a fixed-length k-mer index. It estimates homology in terms of sequence identity and while this is often enough to find homology in relatively conservative sequences, the heuristic scoring model doesn't really allow to search motifs. A motif in terms of bioinformatics can be seen as a series of state-switch events, hence you need a model that estimates similarity in terms of likelihood of observing such a sequence of state switches under your prior state-switch matrix (inferred from a training sample). These models are known as Markov models and people usually utilize Hidden Markov Models to find motifs. There are good popular tools, such as HMMER

As motifs are locally conserved regions & BLAST also performs local alignment then why it should not be able to search for motifs?

BlastP carries out a search for sequence similarity to infer function by comparing an unknown sequence with a sequence that has already been annotated with a function, but structurally similar proteins with different sequences can have the same function because function can be mimicked if the replacing amino acid falls into a similar category as the substituted amino acid. The four major categories of amino acids are: negative charged, positively charged, polar and hydrophobic.

Proteins have many shapes, while the double helix in DNA is the form in which DNA is most often found. Therefore, the structure of DNA is not as important for function as the structure of proteins are for protein function. So you need a tool that can compare the three dimensional shape of one protein to another (in addition to sequence comparison) to make an estimate of how likely there is going to be a similarity in function. The Research Collaboratory for Structural Bioinformatics offers a tool that can compare proteins by sequence as well as by structure. The following screenshot shows the options for comparison under each of these two categories: 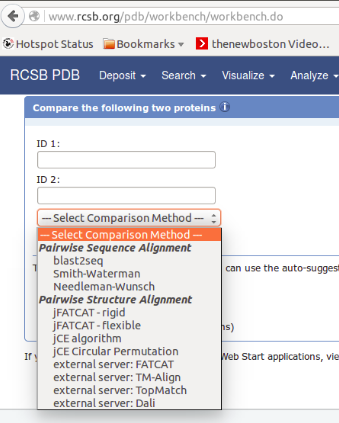 Not the answer you're looking for? Browse other questions tagged bioinformatics blast or ask your own question.

3
Bioinformatics tool for "pairwise alignment" of complementary sequences?
1
Blast a sequence against multiple databases
0
BLAST(Basic Local Alignment Search Tool) is heuristic?
3
Why does BLAST reduce word size for short proteins?
6
What is the meaning of "E-value" in the BLAST search?
1
Why are the results of local BLAST and miRbase BLAST different?
0
Is it PSI-BLAST or BLASTP if I use PSI-BLAST for only one iteration
0
blast search against UNIPROT
3
Using BLAST for molecular replacement in structural biology