How to choose secondary Antibody?

You are not telling, what you do, but I think itis western blot - and for this application it is not important to know which isotype your antibody has. The secondary antibody (which is supposed to bind the primary) has to be directed against the isotype (IgG for example) and the species in which the primary antibody was made, in your case this would be this would be anti-mouse or anti-rat IgG. Since most commercially antibodies in the lab are IgG people usually don't think about it.

The reason is that the secondary antibody is directed against the Fc part of the primary antibody (which has a species specific sequence) and even with the differences in the sub-classes due to different assembly of the light and heavy chains this will not be detected by the secondaries. See the figure (from here) about the schematic differences: 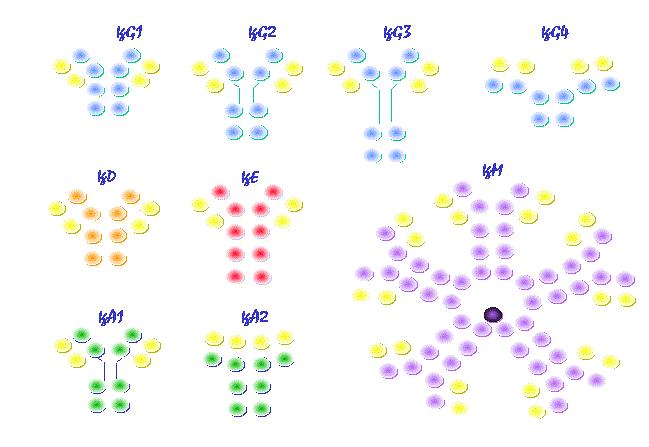 With a careful selection of the peptides used for immunisation it is possible to generate secondary antibodies which can be used to distinguish between sub-classes.

7
Conjugate secondary antibody
6
How is antibody production stopped?
2
Antibody production in secondary immune response
3
How specific is the adaptive immune response?
4
Why can we use mouse-produced antibodies on mice tissues?
3
What is "non-immune immunoglobulin"?
1
How are antibodies specific for a disease detected in the blood if everybody produces a different antibody for the same antigen?
3
What determines if a small protein / large peptide is immunogenic?