I'm reading this paper that the Human Brain Project published in Cell and I'm confused how they recorded the firing rates shown in the firing below: 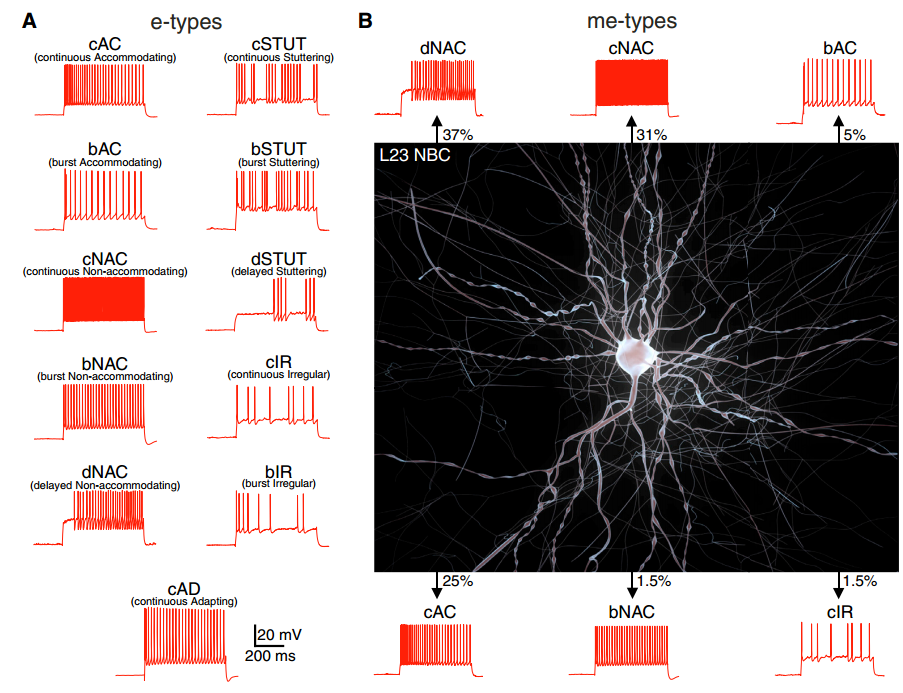 In the publication, they mention that they use the Petilla convention. However, upon reviewing that publication, I was unable to determine the procedure of characterising neuronal firing rates. How are they able to isolate a neuron's firing behaviour away from the network it is usually contained in? Where do they measure the outputted firing rate?

I am aware that usually to characterize a neuron in a network, Spike Sorting or single-neuron recording can be used, however this doesn't seem like a valid way to characterize the physiological properties of an individual neuron.

If you consult the experimental procedures section of the paper, you can find that they used methods previously established in three papers. However, upon reviewing these papers, it appears that the neurons were stimulated while still inside the tissue, but after the tissue had been sliced. However, this seems so absurd that I must be misreading it.

How were the electrophysiological properties of these neurons characterised?

However, upon reviewing these papers, it appears that the neurons were stimulated while still inside the tissue, but after the tissue had been sliced. However, this seems so absurd that I must be misreading it.

You're not misreading it. I can't access the paper you refer to, but this is a standard way to measure the electrophysiological properties of individual neurons, and has been for more than 25 years. (I'm really curious what you find "so absurd" about this).

I'll take an educated guess (since I can't read the methods online) that these recordings are from rats (or possibly mice), using whole cell patch clamp technique in thin slices of the young rat neocortex. Briefly put: the animal is sacrificed, the brain is removed, it is sliced into about 400 micron thin slices using a vibrating razor blade, and the slices are kept in a artificial cerebrospinal solution that allows the neurons to remain functional for a day's worth of experiments. Then individual neurons are imaged under a microscope and "patched onto" with a glass micropipette that contains a silver wire. Electrical events in the neuron can thereby be recorded into one's computer and plotted as shown in the figure you provided.

In this case, what's shown are what are known as current clamp recordings, in which current is injected into a neuron and the resulting voltage changes are recorded. Here, they are injecting a depolarizing current to make the neurons spike (have action potentials) and seeing that the neurons they sampled vary in their spiking properties. Some are fast spiking, some are slower spiking, some have different spike waveforms or patterns of spiking.

Not the answer you're looking for? Browse other questions tagged neuroscience measurement or ask your own question.

3
Thoughts precede neuron firing or vise-verse?
19
How does Sodium Valproate cause neural plasticity
3
Can the sensory neuron network and the motor neuron network be considered separate networks?
7
Is there a biological neuron that spikes in response to hyperpolarizing currents?
10
How are neurons / synapses "biased"?
1
Do axonal conduction delays have a function?
1
Has anyone who has ever isolated synaptosomes using subcellular fractionation before know what the 'crude/heavy membrane fraction P2' is?