I'm struggling to arrive at the answer to the following question, which appeared on a pre-test of mine and which I am now using to study the material we've learned. According to this helpful video, I am assuming the possibilities for my question are also autosomal recessive, autosomal dominant, x-linked recessive, or x-linked dominant. I tried each approach as Mr. Douch did in the linked video, but I struggled to find a definitive answer. No matter which approach I picked, it seemed plausible that either the boy or the girl could have the trait, but it seems there's no guarantee that both the boy and the girl have to have the trait. During the pretest, I picked the first answer choice, both the boy and the girl, and got the answer correct by mere chance. But to say that the boy and girl are expected to have the trait would imply that there is a great deal of certainty that the trait will be passed on, right?

The pedigree below shows how a physical trait caused by a mitochondrial gene is passed from one generation to the next in a family. 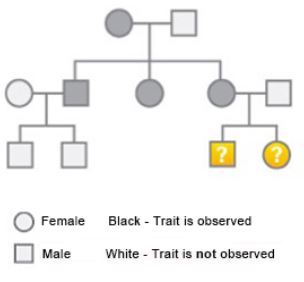 Using this diagram, which children highlighted in yellow would you expect to have this trait?

(A) Both the son and the daughter -- correct, per answer key

(B) Neither the son nor the daughter

(C) The daughter only

Please let me know what I am doing wrong or if I am not understanding the question wording correctly. Does it have to do with the fact that it's a mitochondrial gene? Thanks.

The key here is that it is a question about mitochondrial DNA. mtDNA in humans is inherited maternally (from the mother). Both sons and daughters inherit mtDNA, but only the daughters will pass it on to the next generation.

0
Identifying the inheritance pattern
3
Concept and analysis of Pedigree
3
Can someone help me with this Pedigree Analysis?
0
How can i confirm that the given pedigree chart is of an autosomal dominant trait?
2
Why is the mechanism of inheritance for this disease autosomal dominant?
0
Pedigree probability question
3
Pedigree probability question - complete penetrance