Why is a heritability coefficient not an index of how “genetic” something is?

On his blog, Eric Turkheimer writes:

[T]aken as a number, a unit of analysis, heritability coefficients are funny things to aggregate on such a massive level. What exactly are we supposed to make of the fact that twins studies in the ophthalmology domain produced the highest heritabilities? Should eye doctors, as opposed to say dermatologists, be rushing to the genetics lab because their trait turns out to be more heritable? No. Whatever else a heritability may be, it is not an index of how "genetic" something is. It is not, for example, a useful indicator of how successful gene-finding efforts are likely to be. If nothing else, differences in reliability of measurement are confounded every heritability tallied here. My point is this-- although it's nice to know that on average everything is 50% heritable, it's hard to attach much meaning to the number itself, or especially to deviations from that number, to the fact that eye conditions have heritabilities around .7 and attitudes around .3. Having two arms has a heritability of 0.

Turkheimer implies that there are other reasons why it's not appropriate to say a heritability coefficient is an index of "how genetic" something is. What are those other reasons?

I will discuss a few concepts and slowly introduce the concept of heritability in both senses.

The phenotype is the consequence of the genotype on the world. In brief, a phenotypic trait is any trait that an individual is made of!

Variance of a quantitative trait

In a population, different individuals can have different values for a given phenotypic trait $x$. Because we are talking about quantitative traits we can calculate the variance of the trait in the population. Let's call this variance $V_P$ such as

What is causing phenotypic variance

Why would a population display any phenotypic variance? Why wouldn't we just look exactly the same? What explains these differences?

By the way, a gene (or another non-coding sequence) that is polymorphic (i.e. has more than 1 allele in the population) and which explains some of the variance in the phenotypic quantitative trait is called a Quantitative Trait Locus (QTL). A locus is a sequence (of any length) on the genome.

This equation is slightly simplified and this will affect the below calculations. See the section Other sources of phenotypic variance for more info.

We can now talk about heritability!

Heritability in the broad sense

Heritability in the broad sense $h_B$ is defined as the fraction of phenotypic variance $V_P$ that is explained by genetic variance $V_G$. In the equation, it gives:

Heritability in the narrow sense

We can now define the heritability in the narrow sense $h_N$ as the is defined as the fraction of phenotypic variance $V_P$ that is explained by the additive genetic variance $V_{G,A}$. In the equation, it gives:

In the special case, when all the genetic variance $V_G$ is exclusively done through additive interactions, then $V_{G,D} = 0$ and $V_{G,A}=V_G$ and therefore $h_N=h_B$

Interpretation of the heritability

So, what if there is no phenotypic variance in the population? if $V_P=0$, then the heritability is undefined (as dividing by zero is undefined). However, in general, we tend to think that there is always a tiny bit of environmental variance and most people would just go on saying that heritability is 0 when $V_P=0$.

What will affect the heritability?

A measure of heritability is true for one population, in one environment.

If you change the population, add a few mutations for example, you might well create a polymorphic locus that is causing some phenotypic variance. If you put the same population in another environment, you could suddenly have more or less phenotypic variation due to environmental variance. Typically, if you measure heritability in the lab in a controlled and constant environment, then you will likely overestimate the heritability (as you underestimate $V_e$) compared to the same population that is living in a very heterogeneous environment.

What heritability is not!

If a trait has low heritability, it does NOT mean that it is (or is not) an adaptation. It only means that there is no genetic variance that explains the phenotypic variance.

Why do we care about heritability?

Let $\bar x_t$ be the mean phenotypic value of the trait $x$ at time $t$. One generation later, that is at time $t+1$, the mean phenotypic value is $\bar x_{t+1}$. Let's define the response of selection $R$ as the expected difference between these two quantities, that $R=E[\bar x_{t+1} - \bar x_t]$. Let's define the strength of selection $S$ and the heritability in the narrow sense $h_N$, then

As a consequence knowing $h_N$ allows us to predict the effect of selection on a given trait.

This equation is called the breeder's equation (see this post about its interpretation).

Other sources of phenotypic variance

Saying $V_P=V_G+V_E$ is a little too simplistic. In reality, there are other sources of phenotypic variation such as variance due to epigenetic changes $V_I$ and variance due to developmental noise $V_{DN}$ for example. It is also sometimes very important to consider the covariance between any pair of such variance. So, the equation would more correct if stated as

Briefly, because remi.b gives a lot of good detail about this in his answer, (narrow sense) heritability is essentially a measure of how much of the phenotypic variance is explained by (additive) genetic variance. Phenotype (P) in an individual is the result of genetic (G) and environmental effects (E).

Thus the within-population variance in phenotype is

Genetic variance further decomposes in to additive (A), dominance (D), and interaction/epistatic variance (I).

Narrow sense heritability ($h^2$) is then

Additive genetic variance and, as a result, the narrow sense heritability can be zero for two reasons.

Firstly, if no genes have an effect on your trait, then additive genetic variance will be zero.

Secondly, if the alleles at the loci affecting the trait are fixed within the population, additive genetic variance will be zero.

Therefore, Eric Turkheimer is correct to say that heritability is not a measure of how genetic something is. However, a heritability of zero does not mean that something is not genetically controlled, just that there is no variance in the effects of genes.

To follow from the example of having two arms, clearly having arms is genetically controlled, its a heritable trait, but the number of arms has very little/no genetic variance. Very few people have >2 or <2 arms, thus any allele for that seems to be exceptionally rare (the alleles determining that two arms are produced are more or less fixed, $p \approx 1$, where p is the frequency of the allele coding for two arms).

The following graph shows the effect of allele frequency on additive genetic variance, additive genetic variance is zero when the locus has a fixed allele, and maximised when the frequency of both alleles (a two allele model) 0.5. In practical terms, when p = 0.5, half of the population are heterozygotes, one quarter are homozygotes for allele 1, and one quarter are homozygotes for allele 2. 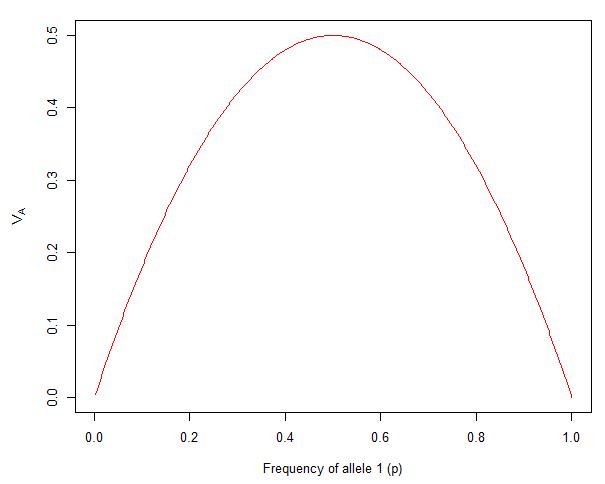 For example, in this study, we showed that genetic variance on the Y chromosome explained only ~0.4% of the variation in lifespan, which could be because very few of the genes affecting lifespan are on the Y (likely, because the Y contains very few genes, while lifespan is highly polygenic) and/or the genes on the Y affecting lifespan have low polymorphism (likely, because the Y is subject to various processes that greatly reduce within population molecular variation, compared to other chromosomes).

Heritability and additive genetic variance are important to understand because they determine the rate at which adaptation (evolution as a response to selection) can occur. Following Fisher's fundamental theorem, and as shown in the breeders equation ($r = h^2s$ where r is the response and s is selection), when $V_A = 0$ the $r = 0$.

I'll try to make this clear with a story, to supplement the answers that rely more heavily on mathematics.

Suppose we have two islands, side by side. On both of the islands, some people are taller than others.

(We also happen to know that, at this moment, there aren't any other factors contributing to variation in height. Convenient!)

Now to our islands.

But that doesn't mean that the environment isn't relevant to height in this case. On the contrary, we happen to know (God told us) that if they'd all drunk coffee instead, they'd all be a foot shorter.

But that doesn't mean that genetics is irrelevant to height in this case. On the contrary, we know (God told us) that if they'd all been As instead, then they'd all be a foot taller.

The most convincing way to remind yourself why heritability isn't about "how genetic a trait is", I find, is to remember that if everyone has the gene, then the gene doesn't vary, and won't contribute to variation; but that doesn't mean the gene isn't relevant!

For example, as far as I know, there is no genetic variation for "having a heart". Everyone is born with a heart. People without hearts are missing hearts because of environmental factors such as this: 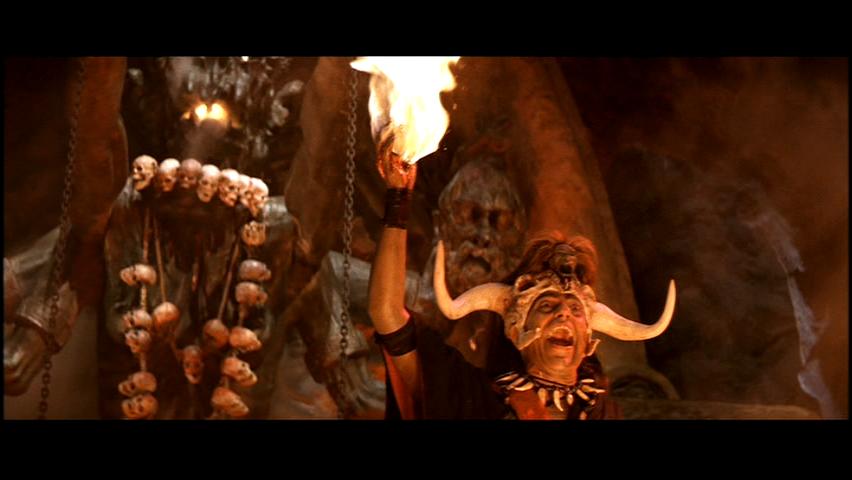 So having a heart has a low heritability, but that doesn't mean genes aren't involved in building hearts!

It also doesn't mean that future environmental factors might not become important. For example, the heritability of eyesight was presumably somewhat high. But that didn't stop whoever did it from inventing glasses!

So that's another lesson. Heritability is not a constant. Natural selection actually tends to push heritabilities down (since it gets rid of the worse genes); and if the environment changes, then the heritability can go up down or all over the place.

So, what if there is no phenotypic variance in the population? if VP=0VP=0, then the heritability is undefined (as dividing by zero is undefined). However, in general, we tend to think that there is always a tiny bit of environmental variance and most people would just go on saying that heritability is 0 when VP=0VP=0."

So, the environmental factors being listed in conjunction with the genetic factors is an attempt to explain heritable factors that do not result from modifications in the DNA sequence, or epigenetic factors. I think that this is why heritability coefficients used in the sense of only being the only useful variable to demonstrate heredity is a problem. The current statistical models that are used to try to delineate environmental variance do not take into account (such as the ones shown above) and although these are the best models we have right now, they do not incorporate variables that could potentially affect epigenetic factors such as DNA repair, cell cycles or DNA methylation.

33
Is evolution a fact?
20
Are mutations a source of genetic variation?
12
What is the definition of “Natural Selection”?
8
Why do humans grow taller than their ancestors?
0
Why is Lamarck's evolutionary theory considered incorrect?
8
Genes and Intelligence
8
Are males taller than females in humans?
10
Genetic Diversity and Adaptation
10
What is the definition of a mutation?
3
Are identical twins clones?
See more linked questions

4
How was the heritability of IQ tested?
1
Can heritability be deduced from a correlation coefficient?
2
Why are de novo genetic mutations usually NOT inherited?
3
How to predict future generations from heritability
0
How does it make sense to speak of heritability of qualitative traits?
0
Why does this genetic pedigree show an autosomal dominant allele at one generation but not another?