Do only one or both pairs of homologous chromatids exchange genetic material during the process of crossing over?

To be specific: Assume chromosomes A and B are homologous. They've both replicated into A1, A2 and B1, B2 and have formed a tetrad at the equator (synapsis). Most textbooks show either A1 and B1 OR A2 and B2 exchanging genetic material, but I've never seen an experiment/paper proving that this is actually the case, and now I've come across this figure showing both A1, B1 and A2, B2 crossing over https://web.archive.org/web/20160314020121/http://www.uic.edu/classes/bios/bios100/lecturesf04am/lect16.htm see ("crossing over" under meiosis) 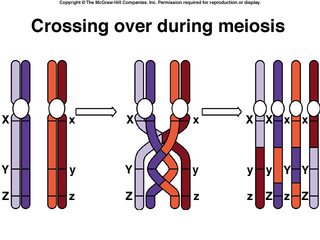 So which version is correct, or do we simply not know for sure? Thanks in advance.

Yes, it is perfectly possible for both pairs of non-sister chromatids to cross over in a single tetrad. The "standard textbook" depiction is a simplification, true tetrads can sometimes be very complicated and the nested crossing-over would be difficult for entry-level textbooks to cover. 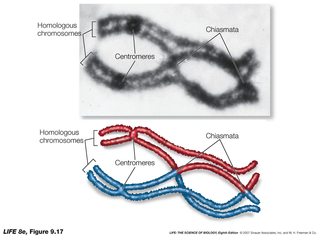 This microscope image clearly shows two chiasmata occurring on two sets of chromatids, with both of the "blue" chromosome's chromatids undergoing crossing over.

In fact, even more complicated chiasmata complexes can form during meiosis. For example, this slide depicts many chiasmata occurring in a single tetrad. More examples can easily be found by searches. 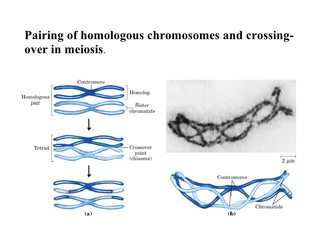 At diplonema of first division, sister chromatids A and A (and B and B) have axial cores holding them from separating. There are chiasmata holding the bivalent (all four chromatids) together that end up being cross-over sites. For each chiasma (singular) two of four strands are affected. There can be multiple chiasmata per bivalent. Humans average two chiasmata per tetrad (four chromatids). Without at least one chiasma, fertility would suffer.

Not the answer you're looking for? Browse other questions tagged genetics molecular-biology reproduction or ask your own question.

1
How exactly are genes swapped during the process of recombination?
2
Self-fertile PRUNUS: Approximately how much of the genome gets rearranged by meiosis?

2
Crossing over and exon shuffling?
2
During the process of plasmid isolation, how can we be sure that only plasmid DNA has been isolated and there is no chromosomal DNA?
1
Do chromosomes line up as pairs in mitosis or meiosis?
1
During DNA foot-printing, what is the purpose of radioactively labeling only one end of the DNA fragment?