Problem: What is this pattern of inheritance?

The following question was on a pretest of mine, and I'm trying to figure out the answer using what we've learned about Mendelian and non-Mendelian patterns of inheritance. I'm struggling quite a lot with this question; I'm not sure if that's because of me or if the question itself is poor/confusing.

I don't know what the answer actually is, as there was no answer key to go along with the exam. My best guess is that the pattern of inheritance is Incomplete Dominance based on the Red x Yellow cross and the fact that neither allele was dominant over the other in the resulting progeny. But is it even possible to state this with full confidence? What about the other crosses?

In a plant species, plants may produce red, yellow, or orange flowers. The table below shows the results of crosses between the plants that produce each flower color. 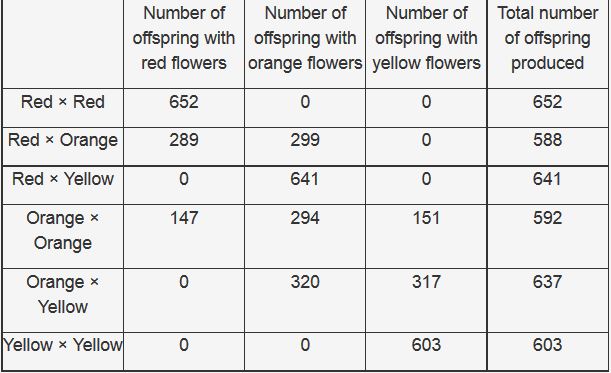 Based on this information, which pattern of inheritance controls flower color in this plant species?

The answer is incomplete dominance.

It can't be codominance, because codiminance involves both phenotypes being expressed in different parts of the organism: you would end up with red and yellow spotted flowers.

Knowing that it has to be incomplete dominance or multiple alleles, we can examine what we would expect to see in either of these cases.

In the case of multiple alleles, each individual plant has two alleles out of a possible three. These alleles will also express some sort of dominance pattern over each other. Let's say, hypothetically, that the dominance pattern goes Red > Orange > Yellow.

In this case, all of the yellow flowers would have a genotype of yellow/yellow. The orange flowers could be orange/yellow or orange/orange. Red flowers can be red/orange, red/yellow, or red/red. When performing the crosses between red and yellow, you would then expect some mixture of offspring, probably mostly red. If the dominance pattern was different, you would still expect to see some mixture of offspring. But instead we see only orange offspring.

In this scenario, you would expect red x red to produce only red offspring, and the same goes for yellow x yellow, because both parents have to be homozygous. Orange x orange would produce offspring in a genotype ratio of 1:2:1, as is the case when you self-cross heterozygous organisms. Orange x red and orange x yellow will produce offspring in a 1:1 genotype ratio, as is the case when you cross a heterozygote with a homozygote. These are exactly the patterns we see, so we can conclude that the answer is incomplete dominance.

Not the answer you're looking for? Browse other questions tagged homework genetics or ask your own question.