Can a cell start a mitosis if it lacks energy or molecules to complete it?

I'm wondering whether a cell can start a mitosis if it lack molecules or energy to fully complete it. From what I'm reading on wikipedia the cell passes most of its time in the interphase in which the DNA is replicated and then there's the G2 checkpoint to make sure mitosis can start.

However I'm not sure all of this is enough to ensure that the cell has sufficient energy to fully complete the mitosis (is the cell "fueled" in energy and molecules during the mitosis or does it has everything needed before starting it?).

Edit: I'm considering this question for humans in particular, or animals in general if the answer is the same.

When I speak about "molecules" I mean any atom or molecule. In other words, whether the cell needs some material intake from the external environment during the mitosis or not. If not, I consider that it has all the necessary atoms/molecules to fully complete the mitosis without any external need.

The short answer: no. First, let's get an understanding of the cell cycle control system, as there are some important molecules involved in this system that regulate mitosis. Think of the control system as a series of stoplights: as you mention, there is one stoplight at the G2 phase. There are two additional checkpoints: one at G1 and one in the M (mitotic) phase, just before Anaphase. Why before anaphase? At this stage in mitosis, the cell checks to determine if all of the kinetochores of the duplicated sister chromatids have microtubules attached to them. This is to ensure proper distribution of chromatids in anaphase.

Throughout the cell cycle, these Cdks, together with their bound cyclins, are able to phosphorylate various proteins in the cell as it undergoes mitosis. For instance, the MPF would phosphorylate lamins, which are proteins on the nuclear envelope that can initiate degradation of the laminar matrix. This is essential in Prophase, when the nucleus is disassembling. There are many other things it can phosphorylate. For a more complete list, look under "Targets of MPF" in the above link for MPF. Take a look at this diagram, taken from Campbell's Biology (9th Ed): 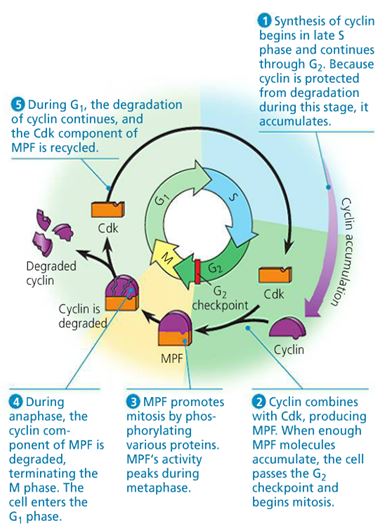 There is one other molecule worth mentioning:

There are many other essential nutrients that cells require before they can initiate mitosis; not all have been listed here. Also, I know I didn't necessarily answer the "energy" part of your question, but I hope this helps for your first part.

Not the answer you're looking for? Browse other questions tagged cell-biology mitosis energy or ask your own question.

5
Meiosis vs. Mitosis
0
Can cell division be stopped during prophase?
7
What do white blood cells do with FOREIGN white blood cells?
0
What is the chance a given gene will end up in a given gamete?
1
Is the cell cycle applicable to meiosis as well, or just mitosis?
4
How do organelles divide?
3
What is the significance of the phospholipid bilayer being two-dimensional?
0
mRNA vaccine and cell mitosis