How do CAM plants keep stomata closed by day and open at night?

I understand how plants open stomata, with the H+ ion removal and the resulting K+ ion influx in the guard cells to induce turgor (wikipedia article here), though not how this process relates to presence/absence of light.

However, I don't understand how CAM plants manage to keep their stomata closed during the day and how it relates to CAM photosynthesis (if at all). I know that malate ions are involved in the opening of the stomata in C3 plants, could the malic acid production in CAM photosynthesis contribute to this?

So my question is: How do CAM plants induce closing of the stomata and what signal triggers this?

As others already say in comments, the complete answer to this question is still unknown. However, the basic mechanism has been understood and has been summarized in the following diagram (from Wikipedia): 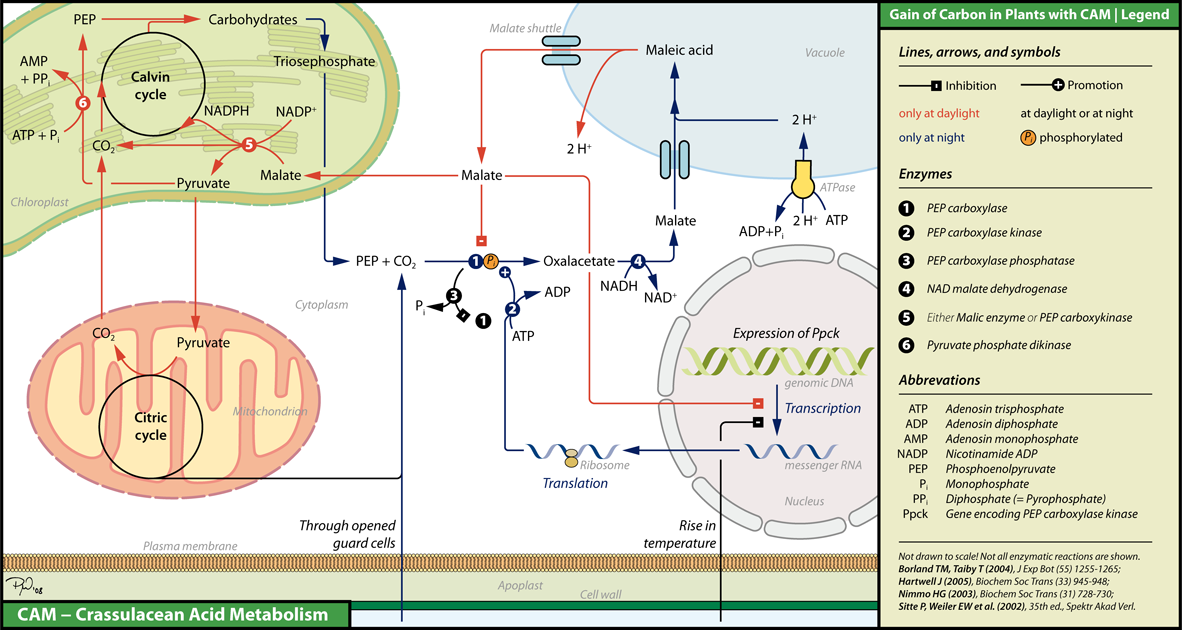 As you see, the mechanism is regulated by temperature instead of presence of light, keeping in mind that high temperatures are generally observed during the day and low tempertures at night. Temperature regulates, at the expression level, the activity of an enzyme PEP-C kinase. This enzyme phosphorylates PEP carboxylase (or PEPCase in short), which increases its activity. So lets see what happens when temperture is high:

Where is light required? As already said, the exact mechanism is still unknown. The mostly accepted mechanism is potassium ion pump hypothesis, but problems arise when we think about the initiation of this process in CAM plants. There are many hypotheses regarding this, and I will follow the one presented by Lee, 2010. Lets begin with the diagram (don't pay attention to the spellings):

I hope this makes the concept more clear, but bear in mind that the above mechanism could later prove to be wrong as further studies on CAM plants help to find out the actual mechanism.

Not the answer you're looking for? Browse other questions tagged biochemistry botany plant-physiology photosynthesis or ask your own question.

-1
Why and how do Stomatal Guard cells turn flaccid at night time and cloudy days, and turgid during the days?

4
Why do plants have pith and how is it useful to them?
10
How do lilies sense day and night and open and close their flowers?
9
How do plants get their O₂ for respiration during the night?
3
Behavior of plant guard cells: open or closed stomata