Did the Zika virus mutate?

The Zika virus was already present and known to the world (mostly in Southeast Asia) before the current outbreak.

Why has the virus caused such an extreme outbreak?

Has it mutated from its ancestral form such as that found in Southeast Asia?

There is one main answer to this question: The Zika virus spreads so fast because it never emerged in this part of the world. Hence there is no natural immunity available in the population and a lot of infections occur. Once this "first wave" of infections is over, the level within the population will fall drastically. Some more information on this topic can be found here.

It is of course possible that the Zika virus has acquired a new mutation which adapts it better to humans and allows spreading much easier, but this is not yet known, since the situation in South America is still changing very fast with a lot of cases occurring and analysis going on. It still can be enough that the virus never emerged in Southern America and that there is no natural immunity available.

According to the paper in reference 1 (which is only a brief communication) the sequences of the envelope proteins of the virus are similar to the strains circulating in Asia and do not carry novel mutations: 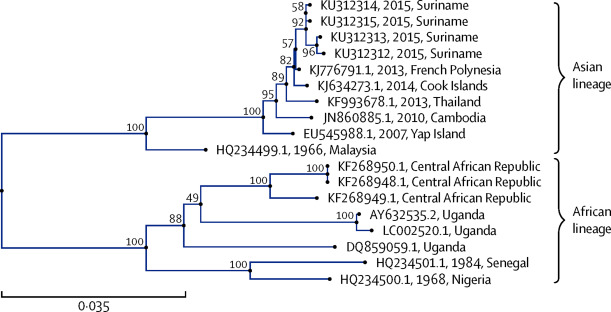 The Surinam strains are the ones published in the paper mentioned above and are from South America. I haven't (yet) found any other analysis, but this will only be a matter of time. At the moment we cannot make a final statement on this although there is some speculation around.

Edit 23/02/2016: There is still no final conclusion available, but there is an interesting paper available on the Biorxiv-Preprintserver, which analyses the mutation rate in the genomes of the publically available strains. It can be found in reference 2.

Based on the available genomes, the author calculates the mutation rate of the Zika virus to about 10 Mutations/year. The virus is a RNA virus which have generally higher mutation rates than DNA viruses.

In the analysis he finds a number of non-synonymous mutations (mutations which lead to a basepair exchange), as seen in table 2: 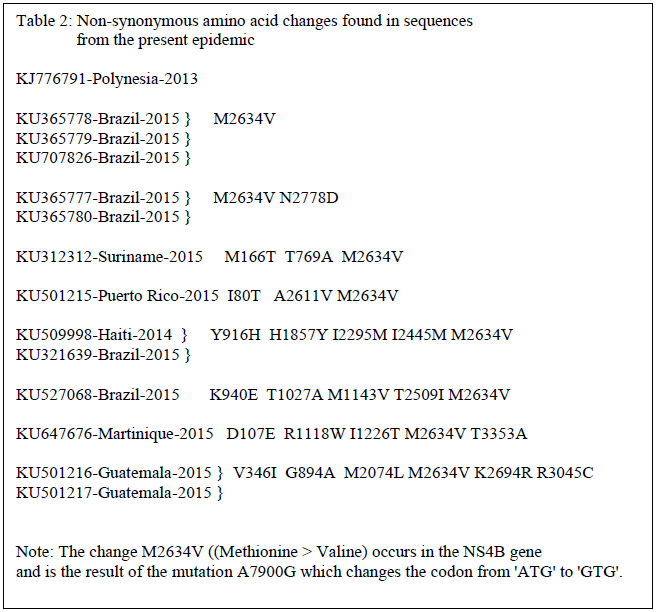 Especially named is the M2634V mutation, but since this is in one of the envelope proteins, the author finds it relatively unlikely (although not completely), that this causes a much higher mutation rate.

In the Diskussion of the paper he writes:

The sudden spread of Zika to South and Central America does not appear to have been due any particular change in the mosquito vector or anything to make the Zika virus itself more virulent. But rather from the fact that infected people are now able to fly rapidly from country to country, thereby spreading the disease extremely easily. This means there is little to stop the epidemic continuing to spread to further areas of population which have little, if any, herd immunity against the virus.

Edit (23.10.2016): There is now an interesting website which builds a realtime phylogenetic tree from the data published (it can be found here). The data also shows where in the virus the mutations occur: 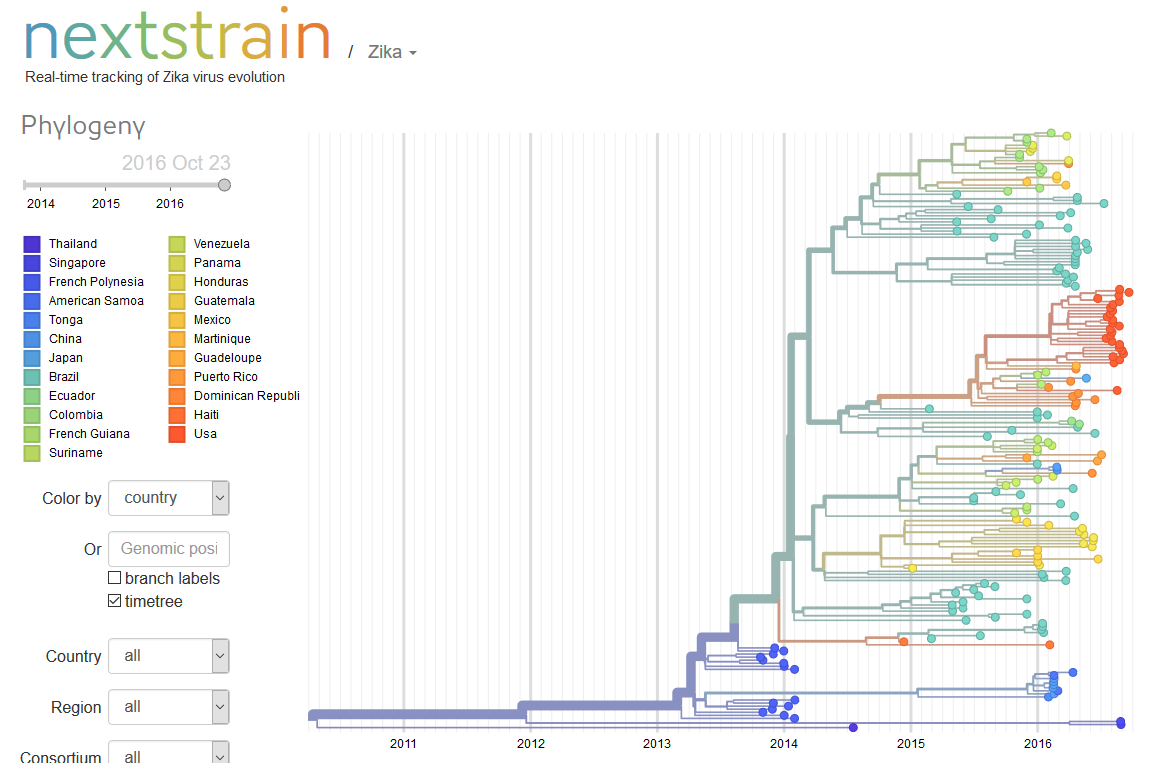 A mutation isn't necessary to explain the outbreak in the Americas, given the low immunity of the population, but there is tentative evidence that this strain of the Asian lineage of the virus may have developed some novel characteristics, which appear likely to have first emerged in the South Pacific.

The virus in Brazil is very similar to the form that drove a 2013 outbreak in French Polynesia:

Two of the novel features of the Brazil outbreak were also seen in French Polynesia in 2013:

It has been theorised that it may have mutated significantly, for example by Flaminia Catteruccia, associate professor of immunology and infectious diseases at Harvard T.H. Chan School of Public Health, who concludes:

What is worrying is that we don’t know what may have changed, and why. There need to be genetic studies to understand the origin of this virus.

There is no need to speculate, the complete genome sequence of an isolate from the Americas has been published and can be compared to earlier isolates. These data show that the genome is very close to the sequence of the virus isolated from French Polynesia.

Not the answer you're looking for? Browse other questions tagged virus infection or ask your own question.

4
How does a virus take control over the host cell?
7
How the conjunctivitis virus spread just by seeing a person's eye who is infected
2
Why does flu vaccination only work against specific strains?
2
How to detect Zika in mosquitos
8
Is Zika suspected of causing birth defects only if contracted during pregnancy?
1
How do I tell if the mosquitos in my New York City apartment can carry Zika?