Does the bending of a tree's trunk in the wind stimulate and strengthen root growth?

Recently Southern California experienced extreme wind velocities and afterwards the news reported over 300 trees had fallen in San Diego County. I had either heard or read somewhere that the action of the wind and bending of a tree assists to strengthen the roots ( I suppose as long as the wind is not strong enough to pull the tree out of the ground). And so that brings me to the point of my question.

Does some kind of mechanism exist within the tree that connects mechanical bending of the trunk with increased rate of root growth? I can imagine that bending might stimulate fluid movement through the phloem & xylem, and perhaps this might be the mechanism. Or does the bending cause a release of some type of growth hormone? Or perhaps the mechanism is epigenetic?

I suppose that if such a mechanism were to exist it would provide one means of evolutionary weeding; removing the weaker part of the gene pool. Perhaps that's what happened in San Diego this last week.

In tree growth there is principle called The axiom of universal stress whereby the growth is in such a way as to equalise the stress across the whole of its structure. The roots, the stem and the branches are one continuous system and can not be thought of as separate.

On a simplistic level for a branch to grow, there must be a corresponding equal and opposite growth in the stem and roots. Of course it is not quite like this as the growth happens across the whole structure at the same time.

The trees on the edge of an even-age stand of trees will have grown to be more stable against wind. They are referred to as being a wind-firm edge to the stand. The trees that have grown up within a stand, with the shelter of their neighbours will not have the same stability in the face of wind, so that if the stand is opened up too quickly it can lead to wind-blow. In uneven-age woodlands, the same principle is true but the dynamics make it less pronounced.

The reason for mentioning this is just to illustrate that, absolutely the wind, and other external factors, gravity being the obvious one, will have an effect on the growth of the roots, as well as the rest of the tree. As the wind exerts a force on a tree that force will travel through the structure and into the roots and into the ground.

To come back to the specific question then.

Does some kind of mechanism exist within the tree that connects mechanical bending of the trunk with increased rate of root growth?

Yes, and no. Because the increased rate of growth will be across the whole structure, but not equally. It will put on growth at the points where the stresses are, in order to self-optimise the loading including within the root system.

The next time you cut either the stem of a leaning tree, or a branch of a tree, take a look at the orientation, and thickness of the rings. You will see that in broadleaf trees (or more correctly angiosperms) the rings on the side under tension will be thicker. In conifers (or gymnosperms) it is the opposite. The thicker growth is found on the compression side.

Here is a great photo of compression wood in a conifer from http://www.copperman.co.uk/didgeridoo/how_to_make_a_wooden_didgeridoo/what_is_wood_2.php 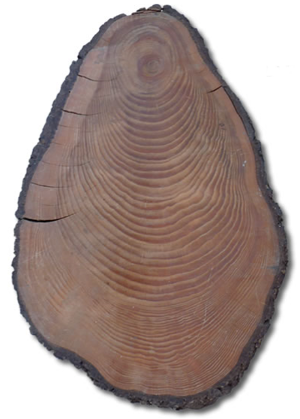 The same principle will be happening in the roots also.

As to the actual physiological mechanism that causes this response I have not yet come across a definitive answer. The consenus, at least as far as I know, is that it is not fully understood.

I dare say there has been more work done on this in the last couple of decades.

Not the answer you're looking for? Browse other questions tagged evolution botany epigenetics growth trees or ask your own question.

3
Scientific name for the union point of a plant stem and root
3
Does the Jungian notion of collective unconsciousness have any legitimacy in the light of modern neurobiology and epigenetics?
5
What does the root "phyllum" mean used botanical binomial nomenclature
4
What is the connection between exercise and muscle growth
3
Which tree's root can grow the longest?
4
Why does capsaicin irritate mammals and also kill fungi? Are the two related?