Crossing over and exon shuffling?

Campbell Biology 10e, in discussing the functions of introns, writes:

The presence of introns in a gene may facilitate the evolution of new and potentially beneficial proteins as a result of a process known as exon shuffling. Introns increase the probability of crossing over between the exons of alleles of a gene—simply by providing more terrain for crossovers without interrupting coding sequences. This might result in new combinations of exons and proteins with altered structure and function. We can also imagine the occasional mixing and matching of exons between completely different (nonallelic) genes. Exon shuffling of either sort could lead to new proteins with novel combinations of functions. While most of the shuffling would result in nonbeneficial changes, occasionally a beneficial variant might arise.

Hitherto, I had perceived crossing over as the shuffling of alleles between two homologous chromosomes, not of parts of alleles. That is, breaks in the DNA during synapsis would occur in between loci, not within them. Am I wrong to think that? My books tell me that, with regards to evolution, sources of genetic variation include mutations and genetic recombination. Genetic recombination includes random fertilization, independent assortment of homologs, and crossing over, yet it is only mutations that can produce new genetic material. If exons were crossed over, then new alleles would be formed, would they not? Is this a type of mutation? (I do not recall studying such a specific case of mutations.)

Crossing over primarily happens because of homologous recombination (HR). From the molecular point of view, it can happen between any homologous regions and it is not necessary that an entire allele has to be crossed over. During the process of HR, a DNA double strand break occurs. This is followed by resection (exonucleolytic degradation of one of the strands — 5'→3', from the break-point) by the MRX complex which leads to formation of ssDNA ends. The length of these ssDNA ends dictate the total length of crossover region. 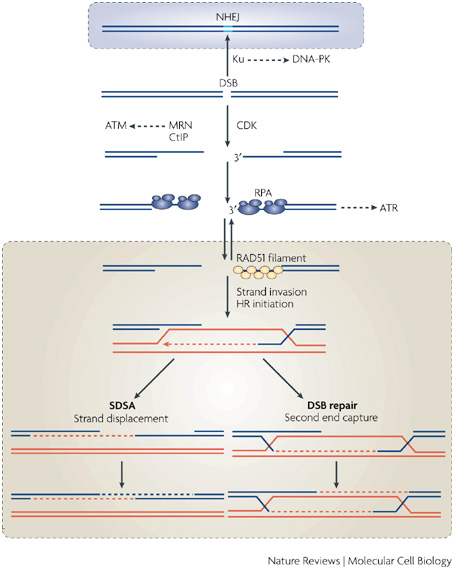 This length can be from around 1.5kb to over 10kb depending on the repair kinetics with possibly an average of 3kb (more than half the cases) [1, 2]. Therefore, the author speculates that the probability of intra-gene crossover would increase with increase in intron length. However, in my knowledge, there are no recent reports to validate this hypothesis.

Going back to the original question. It is not necessary that entire alleles are crossed over. Generally the genome has some recombination "hotspots" flanked by what are known as LD (linkage disequilibrium) blocks. An LD block need not cover an entire gene, as observed by Twells et al. (2003)[3] :

1) Does crossing over occur between gene loci, or can it occur within them?

The cross-over events can happen within genes in introns and/or exons and still lead to viable gametes. The text is stating that it's the increased length from introns that increases the probability of a cross-over event there, which is basically true. This is simplified, and there are hotspots for crossing over and low probability areas. The exon shuffling between completely different genes would not occur by crossing over; there are other mechanisms that would lead to these kinds of structural rearrangements in gametes.

2) Would a new allele be formed by a cross-over between exons, and is this a type of mutation?

A new allele could be formed if one arrangement of exons is allele1, another is allele2, and the cross-over involving 1 and 2 is uniquely allele3. If this happens by a cross-over event, it is not a mutation. Also, there is no "new" genetic material in allele3 even though it could be considered a new allele; it is only a new combination of sequence that existed in 1 and 2.

Not the answer you're looking for? Browse other questions tagged human-biology genetics evolution molecular-biology molecular-genetics or ask your own question.

0
If crossing over can cause formation of new allele, can it affect Hardy-Weinberg equilibrium?