How and why do skin tags develop?

Skin tags are small, soft pieces of skin that stick out on a thin stem. They most often appear on the neck, armpits, upper trunk, and body folds. The cause of skin tags is not known.

Do we really know nothing about why they appear? Is there research that suggest hypotheses of the causes of skin tags? It seems to me a pretty well established phenomena for it to be without good research.

Given that skin tags are considered benign, it doesn't surprise me to find very little published research focusing on them. It's unlikely that much grant money exists to answer questions about them.

That said, though, I found a handful of groups that have done some work on them. It seems that they all noticed a statistical relationship between the occurrence of skin tags, obesity and metabolic syndrome. These are the papers describing their research efforts so far:

None of the groups suggest a mechanistic explanation for the occurrence of skin tags, which makes me think that this remains a very open question. However, they all notice a correlation between skin tags and elevated leptin levels.

Leptin is best known as a hunger/satiety regulating hormone. However, it functions through the activation of the JAK/STAT pathway, which in turn activates a number of genes involved in cell survival and in turning off apoptosis, or programmed cell death. 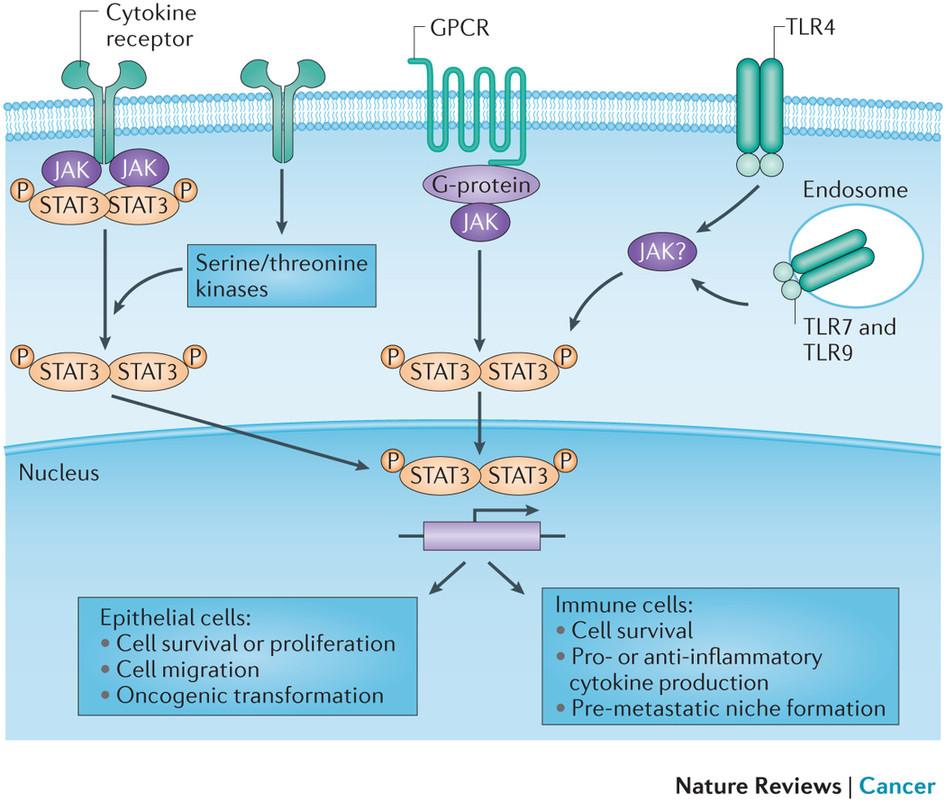 This image comes from this paper in Nature, which, unfortunately, is behind a paywall.

So, my guess based on these data is that increased levels of leptin activate proliferative pathways in cells, leading to the occurrence of skin tags. That this proliferation results in benign cell growth probably has to do with competing tumor-suppressor and related pathways, which I can reasonably assume to be active and functioning, where outright cancer is not present.

What I wonder now, but can't find any information on, is whether skin tags are the only visible evidence of differential cell proliferation, or whether there are other instances within the body. That is, if the leptin-to-skin-tag hypothesis holds, is there something special about skin cells in that response, or are they just the only visible signs of it?

Not the answer you're looking for? Browse other questions tagged skin or ask your own question.

8
How does skin healing work?
3
Physiology of skin and leather: why do salt borders occur?
6
Why are particular laser-related skin products not recommended for darker skin tones?
4
Why is hyper pigmentation the common aftermath of skin lesions and abrasions?
2
How are collagen fibers in skin aligned with respect to skin surface?
2
Why sun rays don't burn our skin?
3
Why did evolution make people's skin dark?