The male satin bowerbird builds a stick structure, known as a bower (distinct from a nest), where courtship and mating take place. They curiously decorate their bowers using blue or shiny objects. 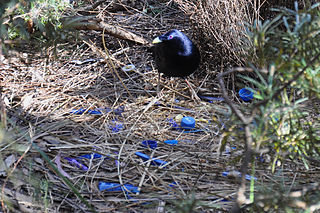 When courting, the male satin bowerbird prances and struts around his bower. He offers the female items from his collection of blue objects, while making a series of hissing, chattering and scolding noises. Mating takes place in the avenue of the bower, and the male may mate with several females in a single season. -- NSW Government Office Of Environment and Heritage

Browse other questions tagged ornithology ethology or ask your own question.

12
Why does Hunger lead to the aggressive behavior?
5
Do any birds have established “poke a predator's eyes out” behavior?
0
Why Can't the passage of acquired behavior be considered acquired inheritance?
11
What is this raptor on a building in California?
1
During a large forest fire, what is the evacuation behavior of birds?
1
Is it fine to state every learned behavior has an innate component ? ie. Behavior X is largely/ mostly laerned with an innate component
1
Territorial behavior in humans?
1
Why are these nesting magpies building another nest