Confusion about resting membrane potential and the Na/K pump [duplicate]

Ask Question
Asked 5 years ago
Active 5 years ago
Viewed 11k times
3
$\begingroup$
This question already has an answer here:
What keeps the resting potential of neurons constant at -70 mV? (1 answer)
Closed 5 years ago.

To this day, very few people and sources have been able to clear up my confusion about resting membrane potential and how it is maintained. It seems like this is one of those topics that few people are able to explain very well...

Here is what I do understand:

However, the sodium/potassium pump is where I get lost. Why does it reverse all that just happened, and why doesn't it cancel out the resting potential if it moves K+ back inside and Na+ back outside? Isn't the voltage fluctuating because of this back and forth movement of K+ out, K+ back in, Na+ in, Na+ back out, etc.? I would imagine this would completely negate the positive/negative charge distribution, but it doesn't. Why?

Clarification: there is a net outflow of Potassium and a net inflow of Sodium. Why does the Sodium/Potassium pump intentionally reverse this by pumping out Sodium and pumping in Potassium? How does that contribute to resting potential?

The Sodium/Potassium pump maintains the overall concentrations of ions on either side of the membrane. In other words it keeps the neuron's battery charged. 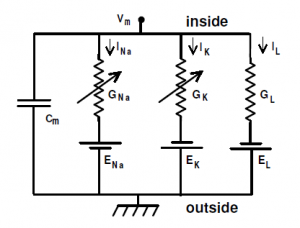 Imagine the neuron like a circuit. We can imagine that the electro-chemical gradient for each ion species (Potassium, Sodium, and so on) as batteries. So When the ions flow according to their electrochemical gradient, the potassium current flows outward and sodium current flows inward as dictated by these batteries reversal potentials [negative for potassium, positive for sodium].

However, note that this will discharge those batteries, i.e. the concentration of sodium on the outside of the cell will drop (slightly) as sodium flows inward the cell, and potassium flows outward the concentration on the inside will drop slightly. Thus the magnitude of the reversal potential of the Sodium and Potassium drops (they move closer to zero).

To counteract this discharge the Sodium/Potassium pumps expends energy in the form of ATP in order to recharge the batteries. The amount of current that the pumps moves is very small relative to the larger currents of sodium rushing in and the potassium rushing out during an Action Potential. Thus when a neuron fires there is very little overall current contribution from the pumps.

When the neuron is at rest (not firing) then the Sodium/Potassium pump is able to recharge the membrane and the current becomes important. Still this is a very slow process, relative to action potentials.

Another thing to note, even though the cell is at rest the batteries are discharging slightly. Their is a leakiness to the membrane, sodium leaks in and potassium leaks out. Thus the pump's current will counteract these leaky currents at rest, keeping the batteries charged and thus the overall net current across the membrane at rest will be zero.

Remember though, these currents are very small currents.

EDIT: Based on Discussion with @Christiaan, I decided to post a update to clarify.

At rest potential Sodium Ion influx is much smaller than potassium ion efflux and thus can be ignored. Whether or not Sodium is ignored the above still holds true. The neuron's membrane is at rest which means the net current is equal to zero. This means that the outward potassium current is counterbalanced by the pump's current thus keeping the relative concentrations of Potassium and Sodium constant while at rest and maintaining a steady rest potential.

So during an action potential Sodium and Potassium ions move in large currents and this current flow discharges the batteries. At rest there is still current flowing (thus smaller discharging of the battery) but there is no Net current flow thus no change in voltage(thus the neuron is at rest). It is exactly counterbalanced by the sodium/potassium pumps. The reasons the pump doesn't overcharge the batteries is the constant but smaller discharge at rest. When the recharging current is equal and opposite to the discharge via the leak current, a equilibrium is reached.

If only you could say one is stronger than the other. It depends on the conditions of the cell.

Lets focus in on potassium. The leak current for potassium is dependent on two (really three) things. The permeability (or conductance) to the membrane to potassium, and the reversal potential of potassium (which is dependant on the internal and external Concentration of Potassium. Thus varying these things will strengthen/weaken the power of the leak current.

The Sodium Potassium Pump is dependent on three things. The External Concentration of Potassium, The internal concentration of Sodium and the availability of energy (in the form of ATP).

The point where these two strengths are about the same is when there is more Potassium on the inside of the cell. That is to say pump is capable of keeping up with the leakiness of the membrane until the internal concentration of potassium reaches about $140$ $mM$ (again that just a ballpark number). If their is less Potassium in the cell then $140$ $mM$ the pump is stronger, if there is more than $140$ $mM$ the leak of potassium is stronger.

I'll try to add some clarity beyond the good efforts xelo747 has made. I will refer to sodium as "Na+" and potassium as "K+", following the standard convention.

[at rest] So overall, there is a net inflow of Sodium and a net outflow of Potassium. Got it, pretty simple.

At rest, there is actually not very much inflow of Na+, because most of the Na+ channels are closed. There is some small outflow of K+, called the leak current. There may also be a very small Cl- (chloride) flow (probably into the cell).

the cell and thus move outwards

A very small net inflow of Na+ during rest. During an action potential--which, keep in mind, can happen up to ~200 times a second (!) and is the neuron's main job, there is a big inflow of Na+.

However, the sodium/potassium pump is where I get lost. Why does it reverse all that just happened,

Why do you "reverse all that just happened" with the workings of a mousetrap when you want to catch the next mouse? You're resetting it. In the same way, the pumps are there to (continually) reset the imbalance of ions--that is, to make sure there is an imbalance (instead of an equal amount of all types of ions on both sides of the membrane). The neuron needs to have this imbalance of ions so that it is like a set mousetrap, ready to fire an action potential when the Na+ channels are "sprung".

and why doesn't it cancel out the resting potential if it moves K+ back inside and Na+ back outside?

Please see this page, and click on #9, "Na-K Exchange pump".

Note, when I say "small", I mean it. Even in a "dramatic" action potential, the % gain in Na+ concentration inside the cell is only about 0.06%. This is because, when it comes to voltage change, only a small amount of ions can result in a big change in voltage.

Isn't the voltage fluctuating because of this back and forth movement of K+ out, K+ back in, Na+ in, Na+ back out, etc.?

At rest, the voltage is not fluctuating: it holds steady. And the movement of ions, in net, is not a back-and-forth movement during rest; it's a steady stream. To illustrate this...

The scene you should picture is the building filled mostly with people wearing red t-shirts (K+), with a small percentage wearing blue t-shirts (Na+). Outside the building, the situation is reversed (many more blue shirts). On both sides, all people are more gathered against the walls of the building (membrane) than elsewhere. Some very small amount of red-shirted people are leaving through dozens of regular red-only doors, in a continual flow. Another very small amount of both red and blue shirted people are going through the revolving doors: two red shirts go in (K+)) while three blue shirts go out (Na+). And there are dozens of these revolving doors in the building. The net effect is that the overall proportion of red to blue shirted people in an outside the building remains the same.

And of course, every now and then, suddenly lots of blue shirt only doors unlock from some magic command from the building computer, and a noticeable amount of blue shirted people enter the building (an action potential)...but not nearly close to enough of them to change the proportions of blue:red in any significant way. They are soon pumped right back out by the revolving doors. (I'm leaving out some other details, but you get the point).

If this scene makes sense, that's a reasonable metaphor for what is happening in the cell with respect to K+ and Na+.

I would imagine this would completely negate the positive/negative charge distribution, but it doesn't. Why?

I'm not sure what you mean by "completely negate the positive/negative charge distribution". This is the crux of your whole question and confusion. The pumps are there to set up and maintain the charge distribution, not negate it. In fact, they require ATP as a source of energy to pump ions where they "do not want to go" if it were only up to diffusion and electrostatic forces. They are constantly opposing rundown of the distribution of charges.

Please let me know if this clears it up, and if not, I can try to amend what I've written.