Resting membrane potential: K+ concentrations and charges on inside and outside of the neuron

According to this site, there is a greater concentration of K+ ions inside the cell than outside. The following screenshot, taken from this website, supports this statement. 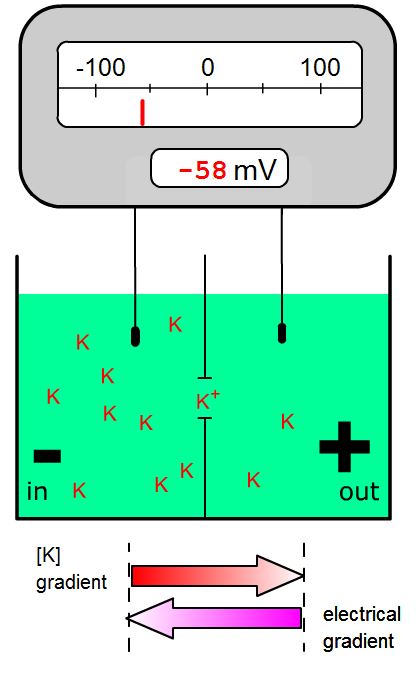 However, I don't understand how the inside of the cell can have a net negative charge if there is a greater concentration of K+ inside the cell. This seems like a contradictory statement to me. (1) Why is the interior negative despite the fact that there are more K+ ions inside than outside, and (2) What exactly causes the net negative charge?

Why is the interior negative despite the fact that there are more K+ ions inside than outside, and (2) What exactly causes the net negative charge?

One of the main reasons for the gradient is Na+/K+ ATPase, which transports 2 K+ ions to the inside of the cell, while 3 Na+ ions are pumped to the exterior of the cell. This generally yields in a higher concentration of + charge on the outside of the cell.

The final membrane potential depends on the permeability of the membrane to these ions. Higher the permeability for an ion, the closer is the actual potential to the equilibrium potential of this ion. (you can read about its calculation here.). Since the membrane in a normal state is not permeable to Na+ to a big extent, but is permeable to K+, the resting potential is similar to the equilibrium potential for K+, which is negative (the actual value depends on the specific cell type, generally we can say -70mV in neurons). (The K+ is driven to exit the cell because of the chemical and electrical gradient, which results in negative charge inside of the cell). The approximation of final potential can be calculated by using Goldman equation.

The principle is therefore in selective opening and closing of specific ion channels and functioning of transmembrane pumps.

Another quick thing to point out is that voltage is a relative measure. Recall that the outside is the "ground" or point where voltage is consider zero. Thus all measures of voltage are relative to this. Excuse my math but lets consider the Nernst equation

Where $R$ is the gas constant, $T$ is temperature in kelvin, $F$ is Farady's constant and $z$ is the charge of the ion.

Now because we have (arbitrarily) decided that outside is the reference point the outside Ion Concentration is on top. Thus In potassium's case $z= +1$ it is $\frac{[Ion]_{out}}{[Ion_{in}}=\frac{smaller}{larger}$ is a number less than 1. Recall the natural log of a number less then 1 is negative thus Potassium presence on the inside means the driving potential is negative on the inside.

Now take into account what Matej Pribis said, Potassium is more permeable at rest, thus its driving potential is more contributory to the rest state than say sodium which has a lower permeability at rest.

This means at rest the potassium Ions negative driving potential is more contributory at the neurons resting state.

I'd actually like to answer my own question for any future viewers, as I found this exceptional website that thoroughly and clearly explains how membrane potential is established. Then, this page in particular, belonging to the same site, goes into more detail as to how the membrane potential for a neuron is maintained via the Na/K Pump. Thank you to everyone who posted a response!

7
Understanding Membrane / Resting Potential from the perspective of ions?
9
What keeps the resting potential of neurons constant at -70 mV?
5
How does a change in the potential across a neuron's membrane get turned into a signal that is sent down the axon?
5
Why is the neuronal plasma membrane more permeable to potassium ions than sodium ions?
4
Why does the side of the mebrane of a neuron with a high concentration of positive ions become electrically negative?
4
Sodium concentration during action potential generation
1
Ambiguity about the relation between membrane potential and concentration gradient in neuron cells
3
Neuronal membrane resting potential for large cells