Are these birch or aspen trees?

I was just wondering if anybody could help me identify the trees in this image? I am confused as to whether they are aspen or birch, a mix of the two, or whether the brown/reddish trees are some other species I don't know about? Thanks! 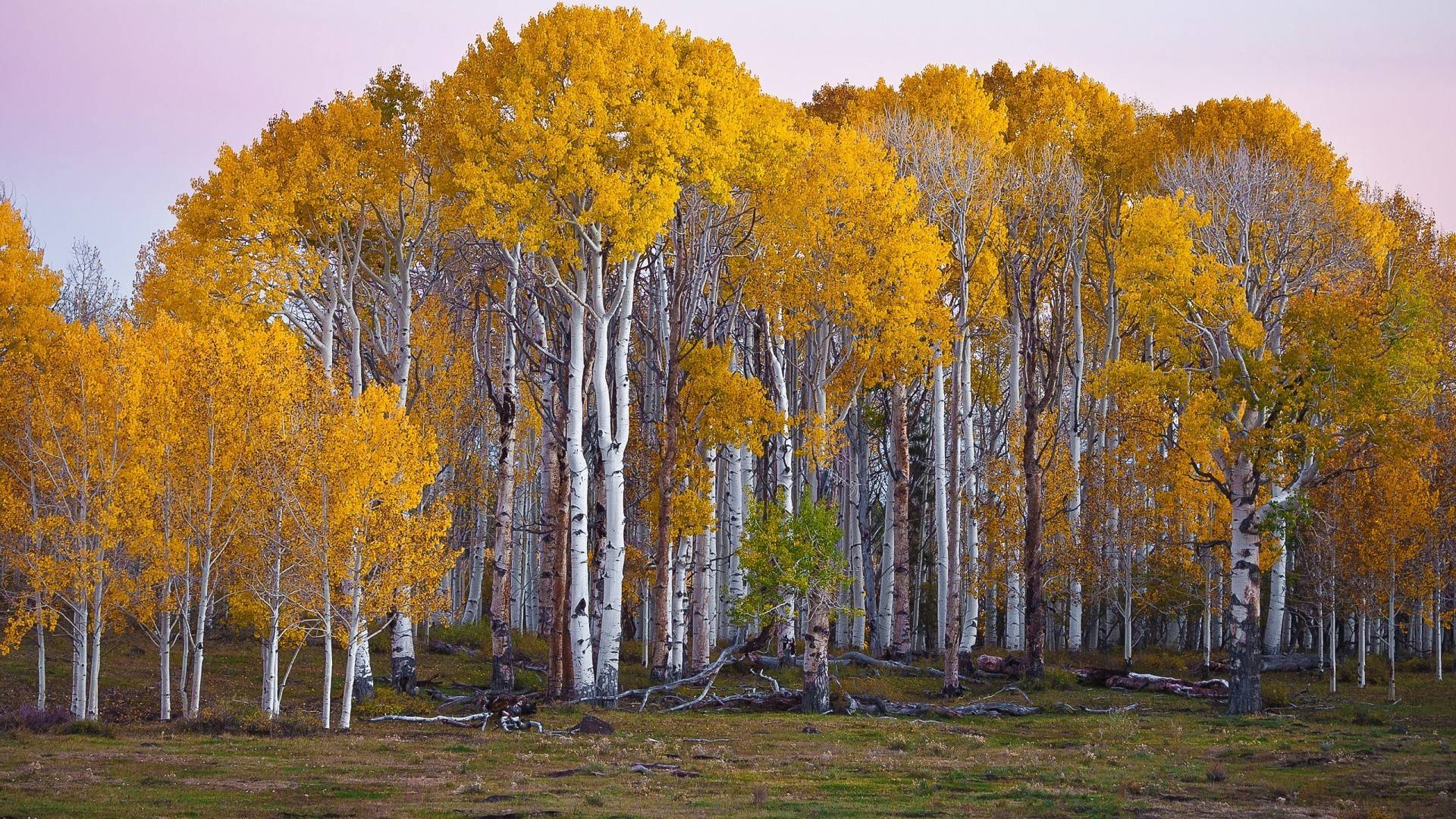 I think they are birch trees (Betula), based on the white bark with black horizontal patterns (Lenticels). The bark patterns at the base of the trees are also very similar to birch. Either way (relating to one of the comments), it's an autumn picture, where both birch and aspen have yellow leafs (aspen leaves can also be red or reddish, especially at the end of branches).

This page also agrees with me (which doesn't necessarily have to mean that much though), which labels the exact same picture as "birch-tree-wallpaper-3.jpg".

I'm not sure about the exact species, but I know that there are North American species where the bark can shift between white, pink or reddish. One possibe suggestion/pure guess is Betula neoalaskana, but as you can see from the wikipedia page this species can also hybridize with Betula pendula and other species. To me, it doesn't look exactly like the Eurasian Betula pendula or Betula pubescens, which I'm most familiar with (those are the two species found in Sweden).

Turns out this is harder than it seems from just the picture...

The three candidates I think one could most argue for are:

Here is a picture of Populus tremuloides from the USDA: 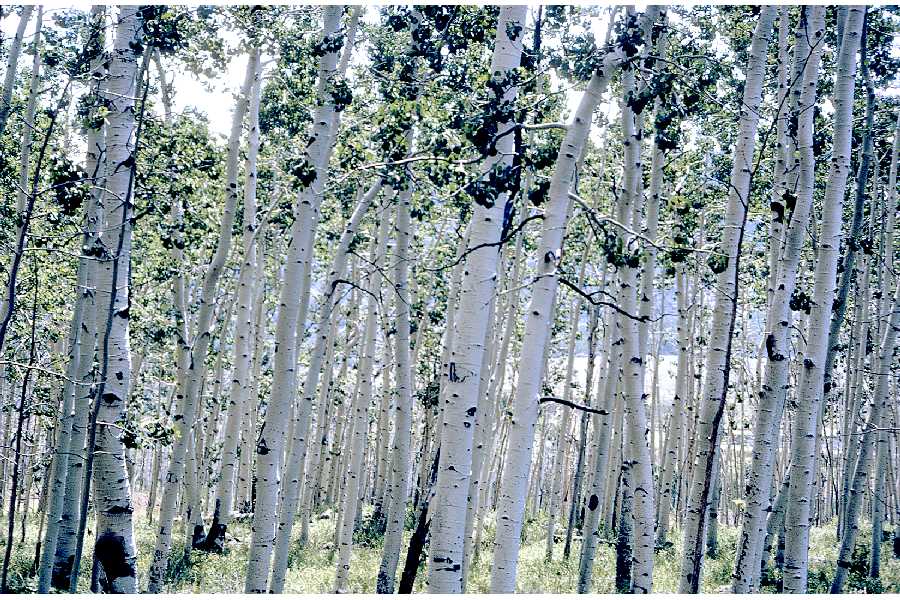 Notice the smoothness of the above Aspen bark (identical to that of the picture in the OP's question). Now compare it to the peely nature of typical birch bark (here pictured B. papyrifera or paper birch): 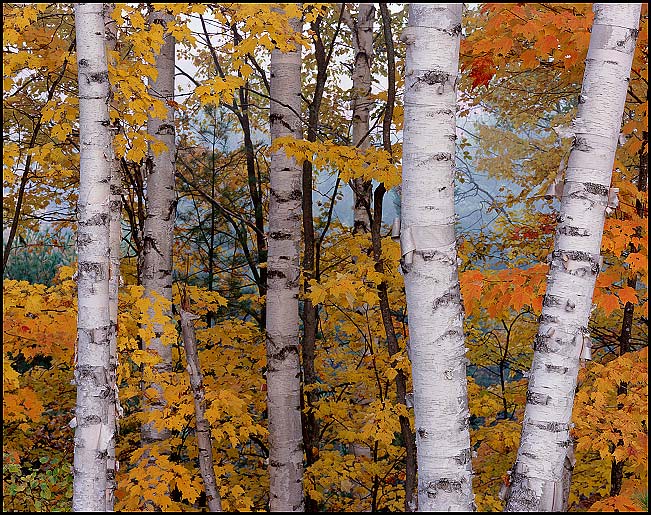 Though not all birch species have peely bark: (my emphasis below)

But Gray birch remains smooth, even at the base of the tree (though see here)...

This base furrowing is a characteristic of P. tremuloides:

Here is a close-up of furrowed aspen bark from the USDA website (yes, this is still aspen): 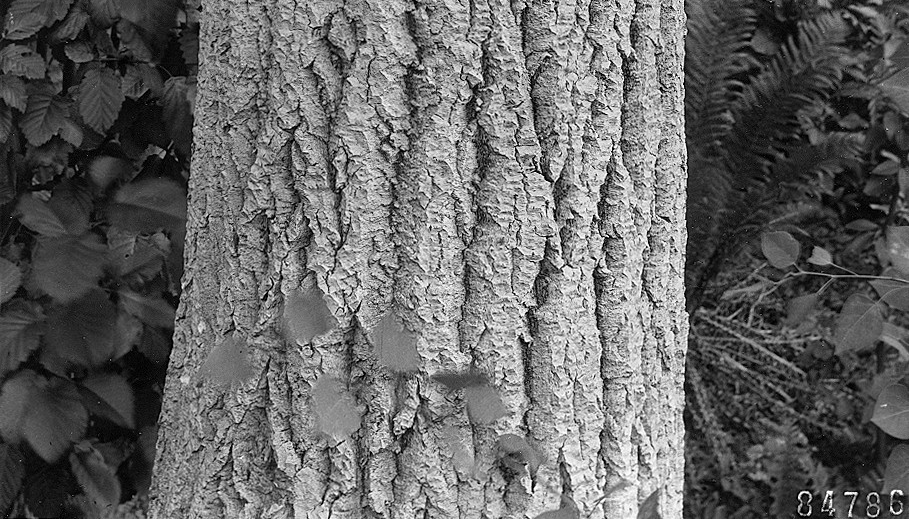 However, this furrowing can also occur in paper birch.

I will comment that I have never seen paper birch with furrowed bark at the base. Further, I was unable to find visual evidence from any reputable sources by searching on Google.

So what about tree shape and form?

Again, according to The Sibley Guide to Trees:

[P. tremuloides has a] single main trunk with relatively stout , jagged twigs (unlike more slender and graceful twigs of birches).

Citing a different source (Field Guide to Trees of North America) to address different language to differentiate the species:

For visual clarification, the typical pyrimidal crown shape of P. tremuloides is shown below (from Oregon State Department of Horticulture). The trees in this image appear more slender (pyrimidal) than the trees in the OP's image, but aspen trees can also have "round" crowns as stated above. 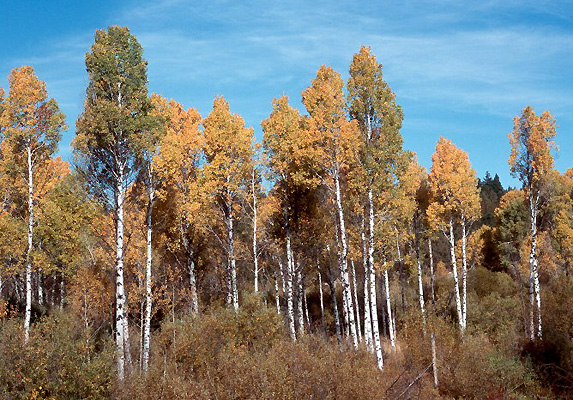 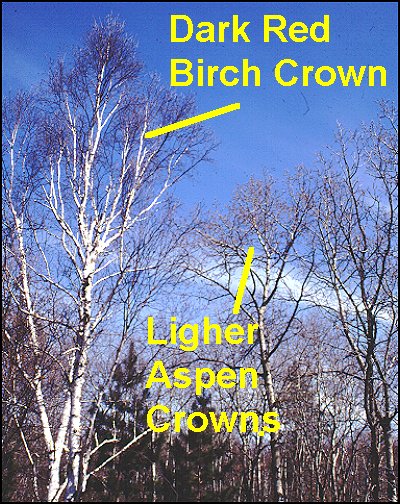 The crown branches/twigs visible in the OP's picture seem to be lighter colored, and so this line of evidence points to aspen.

Ok, so what about size? According to Field Guide to Trees of North America the typical sizes of the species under question are fairly similar, but with gray birch being smaller than the other two species:

The relative sizes of the trees in the OP's picture don't seem to preclude any of these species.

Both birches and aspens develop yellow leaves in autumn, so this characteristic additionally is not useful for differentiating the two genera (or 3 species).

Though @fileunderwater is correct in stating that birches have horizontal lenticels that are helpful in identifying birch trees, the OP's image is far too zoomed out to make out any lenticels (even when zooming into the OP's picture). Those black spots are not lenticels; they are scars (generally from lost limbs). Regardless, other species (including some aspen species) also develop lenticels.

Here is a close-up of lenticels. The little slits are birch lenticels (here from B. papyrifera): 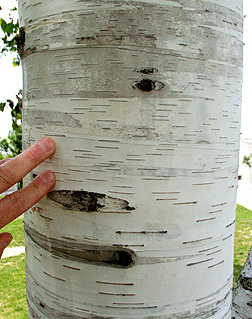 Names on files and webpages are notoriously incorrect so using that as a line of evidence is dangerous. I saw a number of misidentified species in pictures while I was searching myself.

So thus far it seems as though aspen is a pretty good choice, but paper birch could also be potentially correct. The distance of the picture makes this distinction difficult, but I will point to the two lines of evidence that have convinced me that some of the trees are in fact paper birches.

Not the answer you're looking for? Browse other questions tagged species-identification botany trees dendrology or ask your own question.

4
Strategy for tree and shrub identification
2
Are “constraint trees” in phylogenetic analysis cheating? How can I correctly use them?
7
Identifying three species of Datura
5
Whose horns are these?
2
Why does a lightsource postpone the time it takes for the leaves falling from a birch tree?
4
What are these tiny, swarming, jumping bugs?
4
Identify the caterpillars