What is the process of degradation of proteins into amino acids inside living cells?

There are two major pathways through which proteins are degraded in your generic cell: In a lysosome or in a proteasome.

It's considered an organelle. It has a lipid bilayer that encloses a potent cocktail of acid hydrolases working at a low pH. The pH is maintained by a Cl-/H+ antiporter(Ref). Acid hydrolases that are being processed in the golgi are targeted to the lysosome through mannose-6-phosphate residues which are recognized by the trans golgi M6P receptors, packaged into clathrin vesicles, and targeted to acidic late endosomes which fuse, forming the lysososome (Ref).

So through endocytosis or phagocytosis, vesicles full of extracellular proteins are uptaken and may fuse with a lysosome. The hydrolases thus digest whatever they can. In a cell stress response cells may also digest their own contents with the aid of lysosomes in a process called autophagy. We can take a look here at some established lysosomal enzymes current to 2009, and if you spot a protease you can generally take a look at it's specific mechanism to see how it works. So I'll pick one out of the bunch (a lysosome has many different hydrolases remember), Dipeptidyl-peptidase I aka Cathepsin C. The mechanism of proteolysis is that of a cysteine protease which follows a bit of a generic mechanism like so: 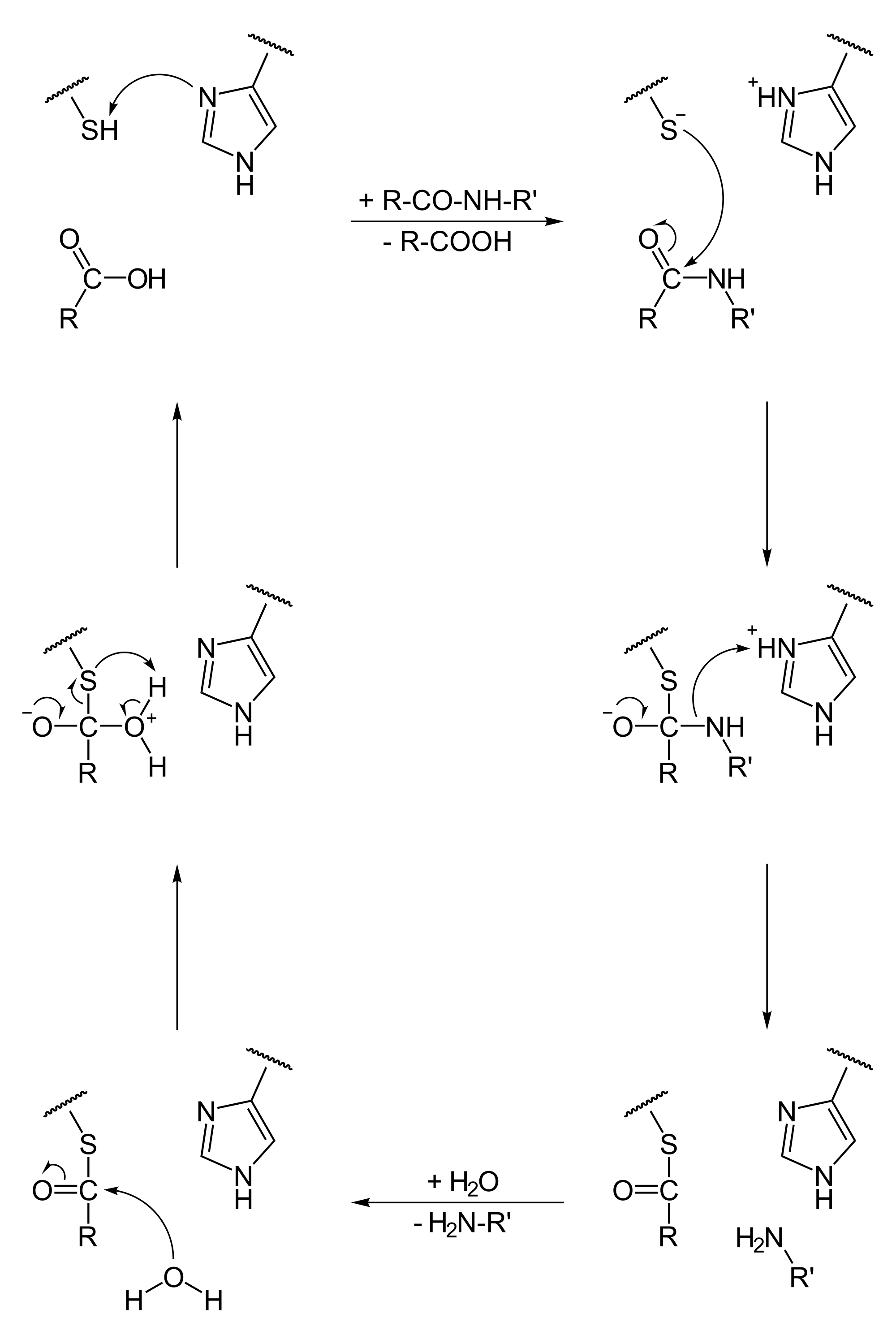 ... and so forth, you can look at a given given protease, and roughly determine how it cleaves peptides.

This one is a a much more directed form of protein degradation. Proteins must be tagged on lysine residues by molecules of ubiquitin, at least 4, referring to the term polyubiquitination. These are added sequentially by proteins denoted E1, E2 and E3 (see proteasome wiki). Proteins that get degraded in this manner are often damaged or come from within the cell, unlike the lysosome where the proteins probably came from outside the cell.

If you read through the whole thing, two notes: (1) the generic term for protein degradation is proteolysis, and (2) The mechanism depends on the protein performing the proteolysis, namely a protease.

4
naturally occuring fatty acids
12
What is the transmembrane 'Positive-Inside Rule' nowadays? Has the definition changed over time?
5
Structure of proteins
1
Amino acids in human cancer cells expose dextrorotation?
2
Can proteins/peptides pass through the intestine?
2
How do metal ions acting as enzyme cofactors “find” their respective enzymes?
4
Will new proteins incorporating new amino acids trigger an immune response?
1
What is the subcellular location of synthesis of non-essential amino-acids?