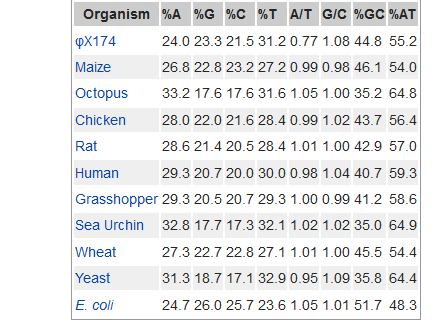 As in the table $A \ne T$ and $C \ne G$. So I was wondering if Chargaff's rule is really applicable?

In addition to Remi.b's answer, it should be noted that the phage Phi X 174 is the only organism in your list which significantly deviates from Chargaff's Rule (by more than 1-2 percentage points for the A-T pair). While sampling errors are indeed more likely in organisms with small genomes, there is in fact another factor in play here.

The following table is a representative sample of Erwin Chargaff's 1952 data, listing the base composition of DNA from various organisms and support both of Chargaff's rules. An organism such as φX174 with significant variation from A/T and G/C equal to one, is indicative of single stranded DNA.

Does Chargaff's rule hold true on these data?

So, yes Chargaff's rule seems to apply quite nicely.

Why isn't the ratio A/T exactly 1?

The question of why the ratios A/T and G/C are not closer to 1 is interesting though. To fully answer this question I would need to go back into the primary literature who produced those numbers.

Did you say Sampling error?

This is just a small stat reminder

My original answer to this question has recently fallen into the third circle of hell because of a contrast I made between physics and biology which seems to have offended some biologists. I shall let that rest, but provide a new answer to make one point that I feel some biology students need to absorb.

The use of the word ‘rule’ should be regarded with great caution in biology. There may be some rules or laws in biology that justify the name (e.g. those that apply to classical genetics), but in many cases, the term is misused.

I maintain that the word ‘rule’ was misapplied by Chargaff to what was actually an observation. In science what is important about observations is how their interpretation can lead to an understanding of fundamental processes — in this case, the base-pairing in the double-helical model for the structure of DNA in many chromosomes.

This is what the modern student should focus on — the understanding of the fundamentals — so that when faced with observations about a particular chromosome that are inconsistent with the double-helical model he considers whether the fundamental model of the chromosome might be different in this case, rather than frets about some incomprehensible ‘rule’.

In the case of 𝜙𝑋174 this leads to the answer provided by @MarchHo, that the chromosome is single-stranded. Another possibility one might have considered would be that there were other bases than ATG and C that had not been detected (we now are aware of chemically modified bases in genomes). The fact that this would have been incorrect in this case is irrelevant — it would be the way one would want a student to approach observations.

I am not against making students aware of the experimental basis of our current views of molecular biology, and (given my age) have been in a position to do that for a number of posts. In general, it is a difficult task because so much is known. However, I feel that the teaching of ‘Chargaff’s rules’ (and Crick’s wobble ‘rules’) is often done without due reflection because they have a certain scientific celebrity. As a teacher one needs to have the courage of one’s own convictions. I feel it helps students if one always refers to ‘Chargaff’s observations (his so-called rule)’ and ‘Crick’s wobble predictions (his so-called rules)’.

And it seems that I’m not the only one. In the 5th edition of Biochemistry by Berg et al. we have no mention of Chargaff’s ‘rules’. Instead we have:

“In 1950, Erwin Chargaff reported that the ratios of adenine to thymine and of guanine to cytosine were nearly the same in all species studied. Note in Table 5.1 that all the adenine:thymine and guanine:cytosine ratios are close to 1, whereas the adenine-to-guanine ratio varies considerably. The meaning of these equivalences was not evident until the Watson-Crick model was proposed, when it became clear that they represent an essential facet of DNA structure.”

March Ho's answer is correct. However the important thing to learn from this is that biology is not physics, and there are no rules — only observations and explanations. What Chargaff made was an observation for which he had no explanation. It was only when Crick and Watson postulated AT,GC base-pairing in double-stranded DNA that the observation was rationalized. More important, those DNAs that were exceptions to the 'rule' could be rationalized as differing from the Crick/Watson model. In the case of phiX 174 it was because it had a single-stranded genomic DNA, but one can envisage other (incorrect as it turns out) explanations in terms of modified bases that were not detected in the assay. Biology is a science of exceptions rather than rules.

Not the answer you're looking for? Browse other questions tagged genetics dna or ask your own question.

4
Is there variation of AT/CG ratio along species?
5
Anomalous base pairing of nucleotide tautomers
4
Why is the ribonucleoside derived from thymine, 5-Methyluridine, abbreviated m5U and not T?
6
Twist in the DNA double-helix
4
What is the justification of Chargaff's second parity rule?
4
Why is the GenBank entry for the genomes of RNA viruses like coronavirus written as DNA?