From reading about Allee effects, it appears that there is a modification of the one-dimensional logistic equation to account for an allee effect given by:

Here, $r$ is the species growth rate, $K$ is the carrying capacity, and $A$ is the threshold for the population to not go extinct $(0<A<K)$.

A few questions about this model:

2) I'm interested in an extension to a system of $n$ interacting species. Suppose I have $n$ competing species where each one is subjected to its own allee effect. Is this a suitable modification of the above ODE for $n$ species?

where $1 \leq i \leq n$. In that regard, the first two terms are the usual Competitive Lotka-Volterra model, and the last term accounts for the Allee effect.

For comparison, here are two examples of how an Allee effect can be modelled, that shows how the per capita growth rate is affected with an weak Allee effect (see e.g. Boukal & Berec 2002 and Ferreira et al 2012) or a strong Allee effect (your model):

If per capita population growth rate (dN/dtN) is plotted against population size for these two models, as well as for the standard logistic model, this is what you get: 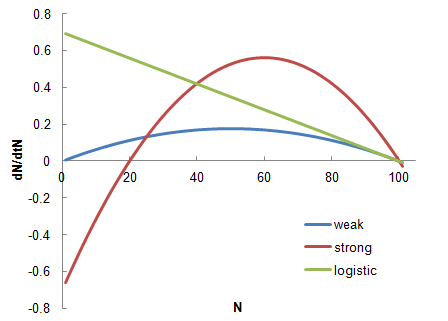 In these examples, r=0.7, K=100 and A=20. As you can see, there is a big difference between the weak and strong case. The population growth rate (dN/dt) at different N is shown below: 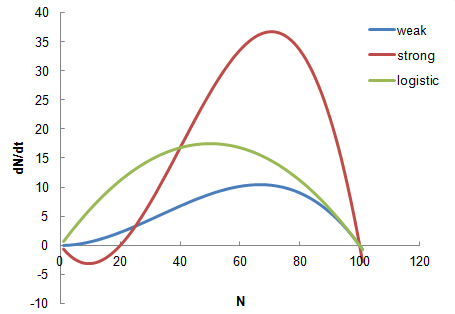 As you can see, if populations using the strong Allee effect are started below A (in this case 20) the populations will decline towards extinction (since dN/dt is negative below A).

The multi-species extension including species interactions that you propose looks ok to me, for that particular formulation of the Allee effect.

Also, for a flexible way to study the Allee effect, you might be interested in this formulation (see Boukal & Berec 2002), which can produce both a strong and a weak behaviour:

This function will produce a weak Allee effect if $A \leq 0$ (very weak if A is far below 0) and a strong effect is $A>0$. The weak model I give above is a special case of this formulation with $A = 0$. Per capita growth of this model is given below, for two values of A (with r = 0.5 for the logistic model and r = 0.38 for the flex models) 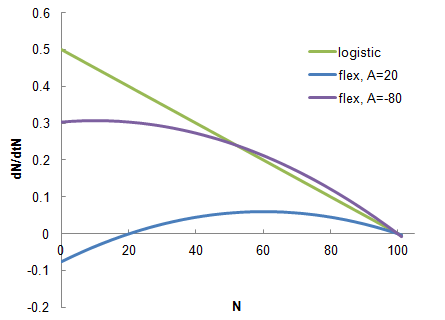 Not the answer you're looking for? Browse other questions tagged theoretical-biology population-dynamics or ask your own question.

14
When are population dynamics models useful?
11
The replicator equation vs the Lotka-Volterra equation
2
Statistical genetics: Allele frequencies that follow a Dirichlet distribution
8
Can we use differential equations for population that is discrete?
1
Confusion about Lotka_Volterra model for two competing species
2
How to model species interactions on population size dynamic?
5
On stochastic Lotka-Volterra predator-prey model