In this experiment, we transformed a truncation of the NFAT protein sequence into a plasmid vector to be expressed in E.Coli as a fusion protein with GST. We also attempted to transform the normal plasmid without NFAT so that we could get GST alone. After growing up these colonies and selecting positive colonies, we lysed the e.coli. We collected some of this lysate for SDS-PAGE. We then put the lysed GST and GST-NFAT solutions in separate columns with glutathione beads. GST binds glutathione. We washed the column and collected some of the wash for SDS-PAGE. Finally, we eluted the GST and GST-NFAT off the column and saved some for SDS-PAGE.

I have attached a picture of a successful version of the SDS-PAGE. 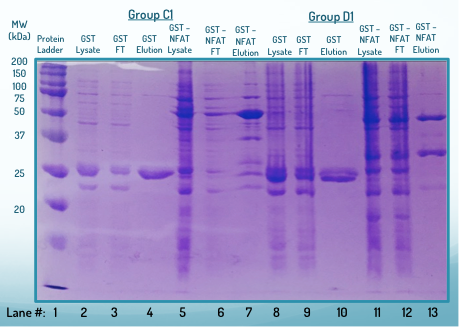 You want to direct your attention to the first lane, the Molecular Weight Marker (MWM). The rest of the lanes should be interpreted in sets of 3. The first of the three is the crude lysate, the second of the three is the first wash, and the last is the eluted protein of interest. The important lanes for my analysis are 8-10 and 11-13.

I will explain what I know from this SDS-PAGE gel so far. I know the weights of the different bands in the molecular weight marker because I was given a copy of the different proteins in the marker. From this information, I was able to confirm that I isolated my protein of interest in lane 13 and isolated GST-alone in lane 10. I also understand the reason why the lysate lanes are darkest, followed by the wash lanes, and then very clean protein of interest lanes. Also, note that the marker and the elution lanes were loaded with 10 microliters while the other lanes were 2 microliters each. However, there are some things that I do not understand from the gel.
(1) Why are the bands so diffuse/low resolution. I imagine it may be overloading the wells, but I am not convinced because I followed a set procedure.
(2) Why is there large amounts of streaking, especially in lanes 5, 8, 9, 10, and 11.
(3) I isolated my protein of interest because it was a fusion protein with GST (or just GST alone), and then eluted the protein off the glutathione beads via excess glutathione wash. Theoretically, the lanes for the elutions should be free of everything except the protein of interest and glutathione then. This mostly holds true for lanes 4 and 9, which should only have GST and glutathione. However, lanes 7 and 13 should only have GST-NFAT and glutathione. The lanes are not as clear however and seem to have stained numerous other proteins. What is going on?
(4) I was told by a professor that the second band in lane 13 (the GST-NFAT lane) was a degredation product. How can this be? The band does not correspond to the weights of NFAT alone or GST alone. Also, if the NFAT-GST was degraded, wouldn't there be two bands of degredation product?
(5) Why do the GST-alone lanes have what looks like doublet-bands? (Lanes 4, 10).
(6) If we eluted the proteins of interest with excess glutathione, which has a very low molecular weight, why doesn't it show up on the gel? Is it possible that it ran off before everything else?
(7) I have a list of the weights of the bands of the molecular marker. Yet, there is an extra band at the bottom that does not show up on my list. Is it possible my list is incomplete, or is there something else happening?

Finally, I have attached a picture of a failed SDS-PAGE gel. 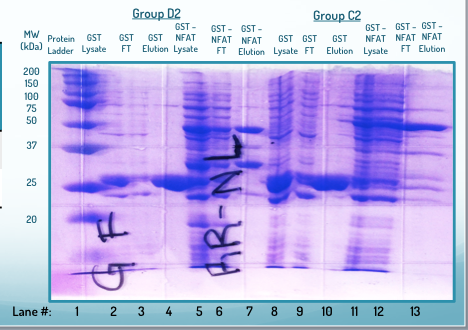 The only thing that I definitively know was a source of error is the fact that my buffer level fell during the run (due to a leak). The results of this gel are accurate (Lanes 2-7 correspond to lanes 8-13 on the above gel, and the results are almost identical) yet the gel turned out horribly. How can the buffer falling cause this result? Or is there something else that may have contributed to this weird pattern? Finally, the lanes are not as distinct in this gel as the first gel, yet the same comb, and thus the same size and spaced wells were used. So why was there so much bleed between lanes/ lack of space between the lanes?

Thanks in advance for any help.

Here are some thoughts based on my own experiences purifying many proteins and running many SDS-PAGE gels:

(1) Resolution--how fast did you run this gel? Often if you run at higher than say 150V or so you can get bands that look like this. The resolution could also be related to..

(2) I would bet the streaking is due to salt in the sample--a lot of the time lysis/wash/elution buffers can have upwards of 500 mM or 1 M salt, and this invariably causes streaking. Load less sample in these lanes and keep the total volume the same to dilute the salt below 250 mM at least. Other things in your buffers could be causing the streaking, but salt is the most common (let us know the composition of your lysis/wash/elution buffers).

(3) Your purification of GST alone looks very good--often your preps will look much more like the lanes you have indicated, which are not entirely clean. This is quite common for a one step purification--often you need 2-3 for certain proteins to completely remove contaminants. There are several possible sources of these bands:

(4) Understand that degradation products do not mean you get only your protein and the fused GST--they can be a variety of truncations due to degradation by proteases.

(5) I would bet this is just due to your running conditions or the salt in your samples. I think this is probably actually your single GST band.

(6) Glutathione will not show up on the gel--it's formula weight is about 300 g/mol if I recall meaning it's about 300 Daltons, so much smaller than anything that you'll retain on the gel. Further, remember than your stain is for proteins--Coomassie blue binds basic residues on proteins.

(7) I'm not sure which band you are referring to, but I think the very bottom band in your marker lane is simply the dye front. It could also be a degradation product of a protein in your ladder.

As far as the second gel goes--it is all due to the buffer level falling during the run. Without buffer covering the top of the gel there is no current flowing. Probably as the leak was occurring you had uneven distribution of the buffer. Strange things can happen when this occurs (unscientific, I know).

6
Does GTP-γS (GTP gamma S) bind all GTP-binding proteins?
0
Why not use SDS-PAGE as a method to detect viruses?
9
RNA migrating slower than DNA on Formaldehyde Gel?
1
A question involving immunoprecipitation to identify interacting proteins?
2
What are the possible reasons to get extra unrecognized band in agarose gel electrophoresis?
0
Preparing sample for SDS PAGE