What is two-start or zigzag model of 30 nm chromatin fibre?

I read some webpages describing the two-start model but could not get it. I'll be obliged if someone helped me understand the topic. The websites I have been through are:

From the MB Info Wiki you linked:

This means that in the one-start model each nucleosome is connected to the one adjacent to it, and this is a continuous cycle. Meaning that it is more like a phone chord.

The Zig-Zag model instead proposes that each nucleosome is connected to the nucleosome approximately opposite to it (parallel), and is a pattern that is continuous through out the chromatin fiber. This is more complicated to understand but imagine it being more like lacing on a shoe.It goes from a hole on one side to a hole on the other side parallel to it but not in the same plane as itself.

To move to the third nucleosome (and pack as tightly as possible) instead of it being directly below the 1st one it is slightly off to the side and not exactly parallel to the 2nd nucleosome.

However the 4rth nucleosome will be exactly parallel to the 3rd, and thus the same amount of degrees off-center from the 2nd nucleosome as the 3rd nucleosome is to the 1st, maintaining the pattern.

This forms a more 3-D tubular strucuture than an actual shoelace on a shoe would (which is more flat like a plane but serves for visual cue).

A 2D step-by-step representation of this would be like the image below:

Here is a model of final figure I made to help explain this: 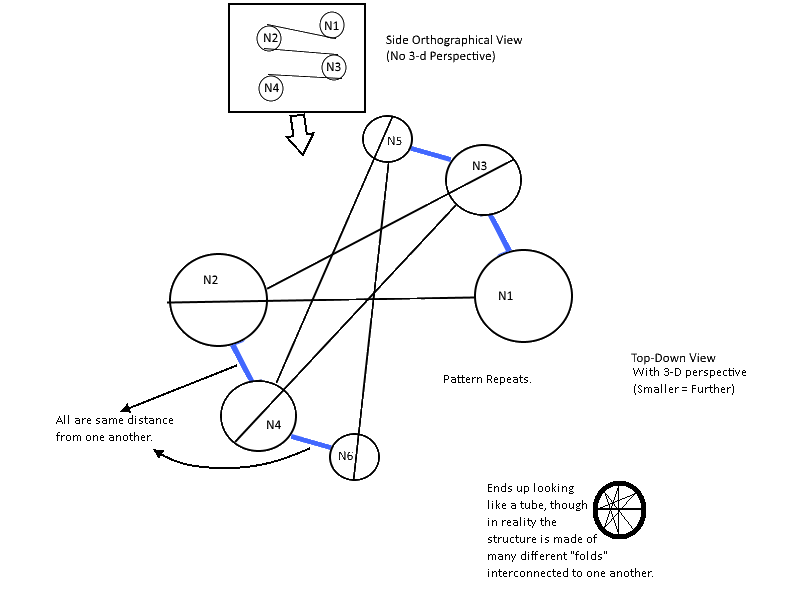 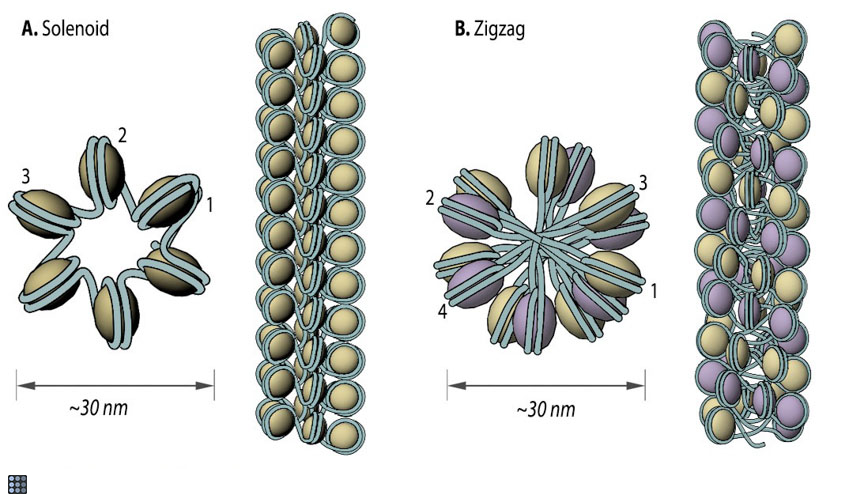 In Theory (Not sure if correct): This may mean that when this fiber "unwraps" it would act less like a spring coming undone(where the whole structure would start to unravel due to how it's linked) and instead each sequential nucleosome being pulled away from the fiber after the one its connected to has moved and experiences full tension.

For the ZigZag model imagine you take a piece of paper and fold it many times as if it were an accordion. Then hold the paper folded up in one hand. Take your opposite hand and pull the paper from one end slowly unfolding it. You'll notice that each fold comes out sequentially while the rest of the structure stays intact until the fold before it flattens out so the tension can pull it. At least that is what would happen in my mind. I could be totally off base.

21
Regulation of chromatin structure
7
What is the fibre axis in the Watson and Crick paper?
1
What happens when we re-start a PCR reaction?
2
Do the two catalytic cores of DNA polymerase III operate in the same direction?
2
How does salt concentration affect chromatin compaction?
1
What does ensemble-based model of enzyme mean?
2
What dictates which protein to synthesize at a given time?