Why are vertebrae, specifically, so important in classification?

A fundamental level of animal classification is the distinction between vertebrates and invertebrates. The vertebrata are, arguably, often classified as higher life forms than the invertebrata. But why is the presence of the spine so important? Why not use the simpler concept of internal bones as a classifier?

I might be missing something, but I can't think of any creature that has an endoskeleton but no spine. Do any such creatures exist? If not, why does classification focus on the spine and not the endoskeleton?

Short answer
The term vertebrata stems from grouping animals according to obvious gross anatomical distinguishing features as typically used in the early days of taxonomy. However, from a phylogenetic point of view, the presence of the neural crest during embryonic development, which is unique to this subset of animals in the phylum chordata, is a much more important distinguishing feature than the presence of vertebrae.

Background
Vertebrates belong to the phylum chordata, but share some characters that make them unique. Chordates, with a few exceptions, are active animals with bilaterally symmetric bodies that are longitudinally differentiated into head, trunk and tail. The most distinctive morphological features of chordates are the notochord, nerve cord, and visceral clefts and arches.

The neural crest has sometimes been called the fourth germ layer because of its importance (Fig. 1). The neural crest cells produce a variety of cell types, including (1) the neurons and glial cells of the sensory, sympathetic, and parasympathetic nervous systems, (2) the epinephrine-producing (medulla) cells of the adrenal gland, (3) the pigment-containing cells of the epidermis, and (4) many of the skeletal and connective tissue components of the head (Gilbert, 2000). 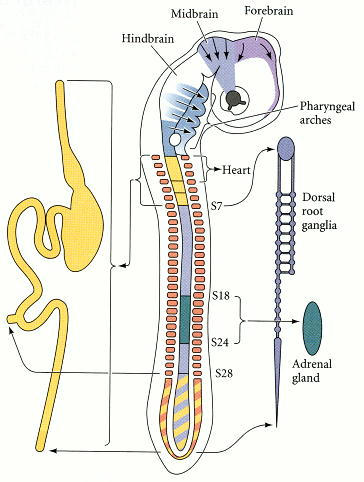 In all, the term vertebrates is just a reflection of an apparent and obvious marker of this group of animals, namely the presence of vertebrae, but their distinguishing most important feature is the presence of the neural crest during development.

Not the answer you're looking for? Browse other questions tagged anatomy phylogenetics vertebrates or ask your own question.

12
Is there a downloadable list of all species along with their traditional classification?
2
Usage of the taxonomic classification "Pinnipedia"
2
Why are there splice variants within the same organism? What might contribute to the need for the feature?
4
The Perplexing Trilobite: What is the Evidence Supporting The Hypothesis That They are Not Crustaceans?
1
Classification and differences between homologous, homoplastic, analogous, derived and ancestral traits?
12
Are humans Gnathostomates?
2
The protostome/deuterostome distinction and why it is important
0
Defining "species" (Are species an emergent property or an ensemble of quantitative differences?)