These bugs are coming out of some wood that I cut and burned in Northern Indiana (USA) . I am not sure if it is coming out of a white ash, cherry or oak. We did have the emerald ash boarer come though the area -- is this an ash boarer? 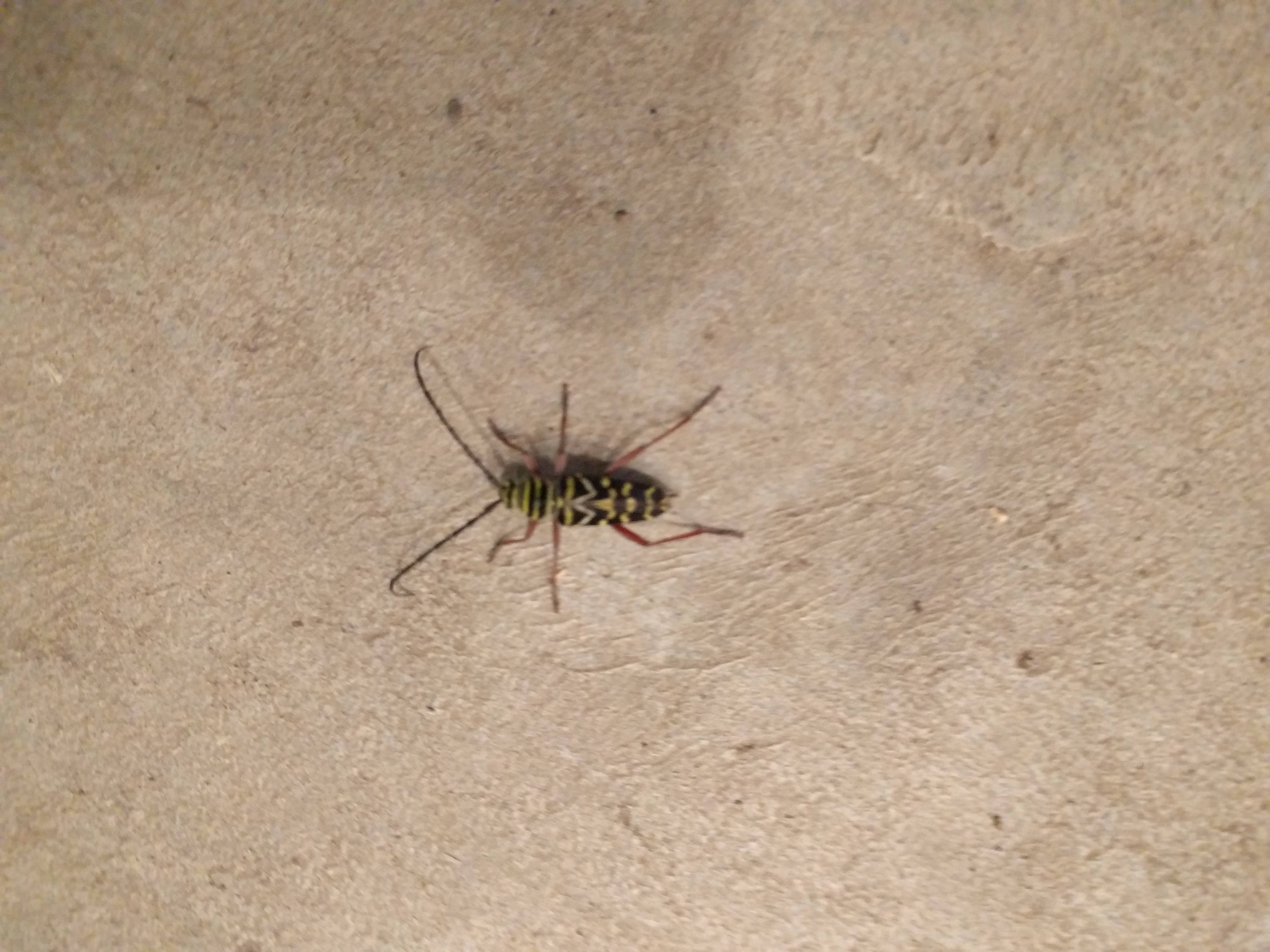 According to the Virginia Cooperative Extension (and here), this species is frequently misidentified as a Locust Borer beetle (Megacyllene robiniae).

Here are their pictures side-by-side (M. robiniae on the left and M. caryae on the right): 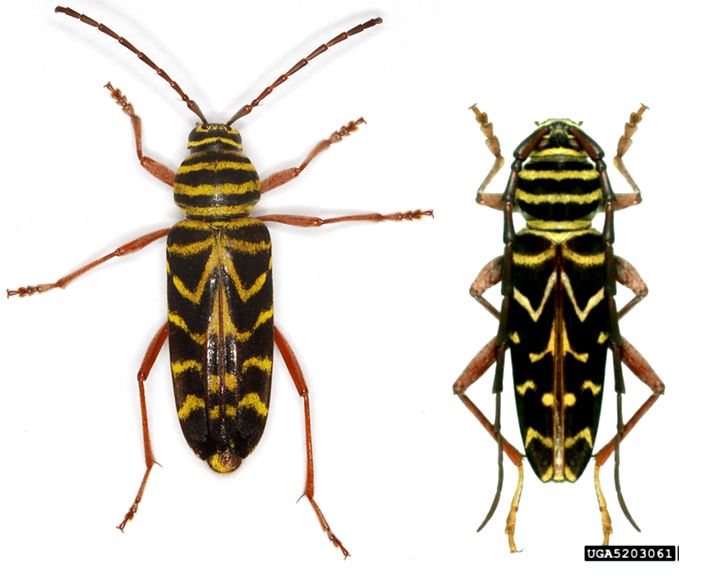 Pretty similar, right? There are some differences though:

The following image from the Ohio State Extension better demonstrates the white W markings of M. caryae (similar to the OP's picture): 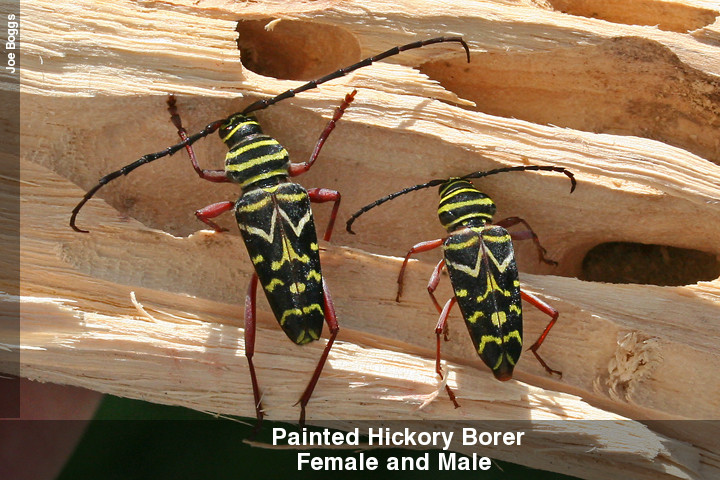 Should you be concerned? Not according to the OSU Extension page:

Fortunately, painted hickory borers only infest dead wood that has been cut for less than one year. ... The beetles will not infest older dead wood; they will not infest wood that has been dried or processed into home furnishings, or used as structural wood. So, beetles that emerge from infested firewood in or around a home are only a nuisance pest.

A quick search for M. caryae turns up few other sources, but you can find additional fact sheets for M. robiniae here, here, and here.

For those that don't know trees: here is a link to learn more about the common North America hickory species, and below are some images of common hickory species. More info about black locust (Robinia pseudoacacia) can be found here. 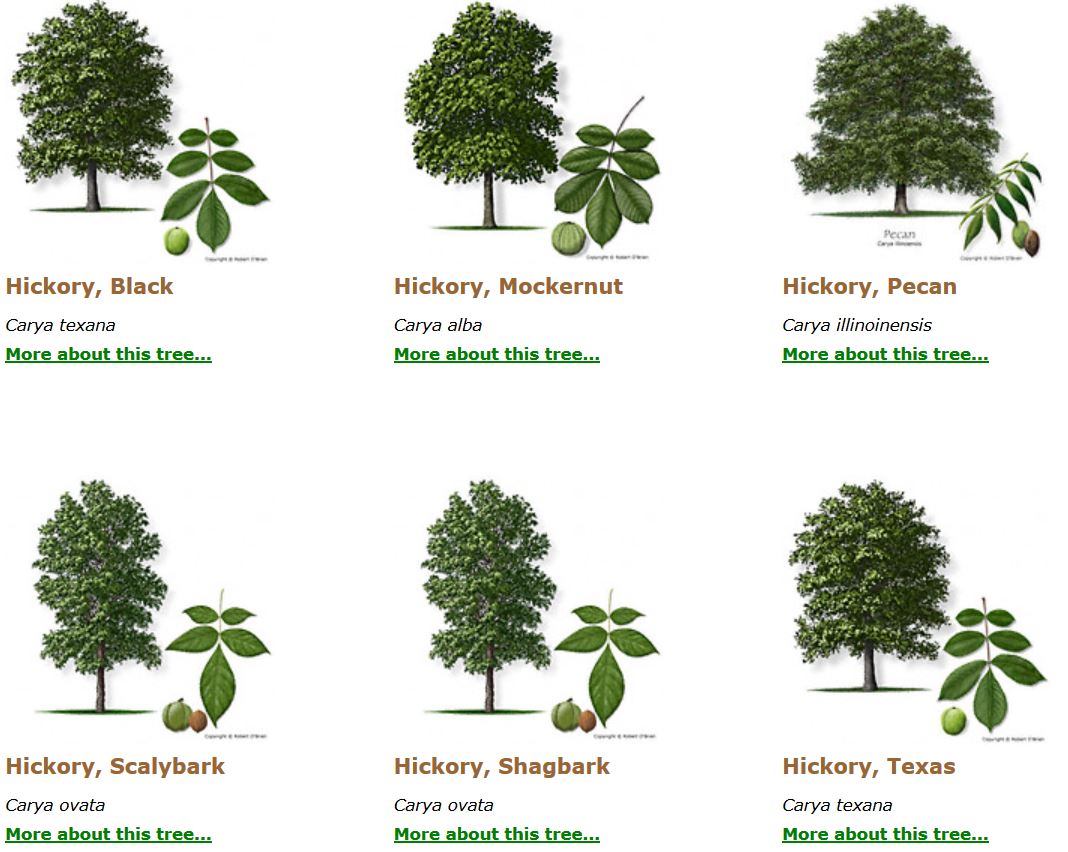 Not the answer you're looking for? Browse other questions tagged zoology species-identification entomology or ask your own question.

6
Identification of an Insect (Hemiptera)
7
What kind of bug/insect is this? photo attached
6
What biological specimen is this? Seed? Excrement? Fungal form?
9
Can you identify this insect for me?
3
Camouflage grasshopper identification
5
What made this small light weight bee hive-like structure?
2
Interesting Insect, possibly a beetle (Northern Indiana)
4
Adult Bugs in Low Humidity House Heated With Wood?