When you have your gallbladder removed, how does it affect bile flow into your small intestine?

Cholecystectomy, or surgical removal of the gallbladder, is an extremely common operation around the world. The gallbladder is typically viewed as a storage organ for bile produced by the liver, but is not necessary for life.

The classical teaching from digestive physiology is that bile is stored in the gallbladder and then released in a pulsatile fashion from the gallbladder in response to nutrients/hormones in the intestine during a meal. The major function of bile for digestion is to solubilize dietary fat so it can be digested by digestive enzymes in the small bowel.

When you don't have a gallbladder and there is no storage of bile, how does that affect bile flow into the intestines? Has anyone ever examined the effects of gallbladder removal on the release of bile from the liver? Is bile continuously released by the liver or is there still pulsatile release in response to intestinal nutrients?

Bile is stored, concentrated, and acidified in the gall bladder. Schwartz Principles of Surgery ch. 32 has a good section on this. After recovery from an uncomplicated surgery, the loss of the gall bladder does surprisingly little (other than, usually, resolve the symptoms of gallstones). This was a bit of a surprise to the medical community when the first cholecystectomy was performed in 1882, and it remained a controversial procedure for some time.

There are a number of studies on the effects on bile flow and the overall cyclic release, reabsorption, and return to the liver of bile via the portal vein called enterohepatic circulation. Animal and human studies demonstrate compensation by the liver, bile duct, and the sphincter of Odie. Overall bile flow is reduced, there appears to be greater release into the intestine during fasting states, and there do appear to be changes in the composition of bile, but, most importantly, enterohepatic circulation is still pulsatile, in response to a meal, as you can see in the figure below. 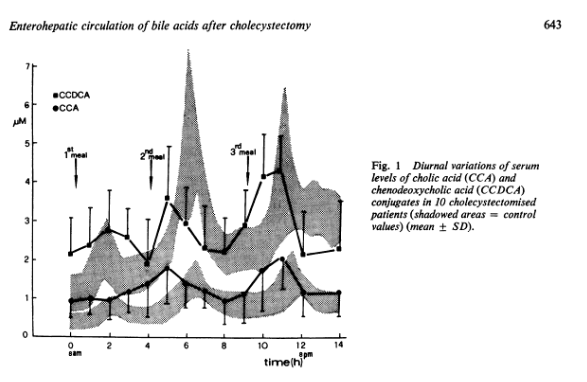 Both solid lines are subsets of bile acids, measured in the serum of cholecystectomized patients in a classic 1978 study. The shaded areas represent control (not cholecystectomized) patients. These measurements suggest that enterohepatic circulation still follows a pulsatile pattern after cholecystectomy.

12
Why does it hurt when you take sweets, if you have cavities in your teeth?
2
How does Humira work when injected into patients with rheumatoid arthritis?
2
When you take a very cold or hot bath how is that influencing your breath?