How can a tongue-biting parasitic arthropod become a fully functional tongue?

The parasite Cymothoa exigua [consumes a fish's tongue and] then replaces [it] by attaching its own body to the muscles of the tongue stub. The fish is able to use the parasite just like a normal tongue.

Wikipedia says that it replaces the host's tongue and becomes fully functional. But how does the arthropodic parasite reattach the nerves of the fish, such that the fish can assume control of it? Am I misunderstanding something?

Short answer
There is no evidence whatsoever that the parasitic arthropod Cymothoa exigua develops itself into a functional tongue. Instead, it consumes the fish's tongue and occupies the freed buccal space to continue feeding onto the fish's blood or mucus.

Background
The linked wikipedia page that states that Cymothoa exigua arthropods form fully functional tongue-replacements refers to Brusca & Gilligan (1983) to back up that claim. While the journal is credible, the article itself is a theoretical work. The authors base their conclusion that the tongue replacement is functional on the relatively healthy condition of just 2 specimens of fish. They reasoned that, because the parasitic arthropods were relatively large, the fish had to be hosting them for quite a while. In turn, given the relatively healthy condition of the fish, the authors reasoned the arthropodic tongues may actually have had functionality. In the figure below taken from Brusca & Gilligan (1983) the parasite does indeed look much like the normal tongue. 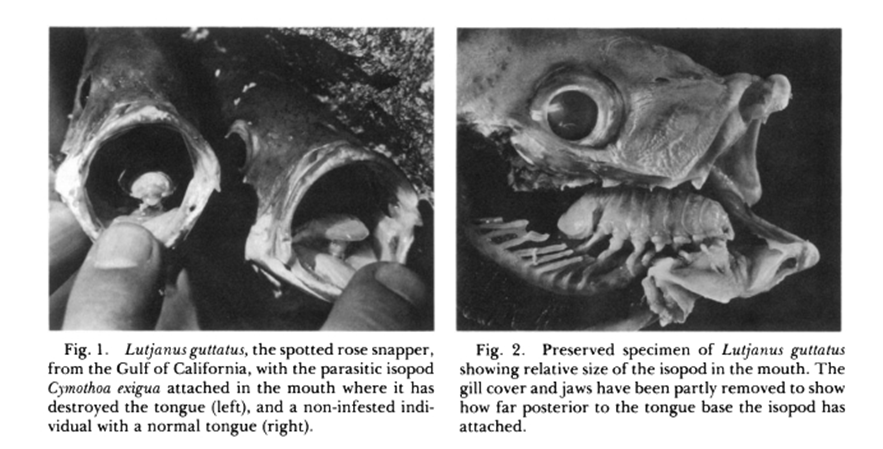 However, there is no mention whatsoever that the parasitic tongue taps into the nervous system and I have not found any literature supporting such a claim. Further, Brusca & Gilligan (1983) specifically say that:

[...] we propose [that] a fish with an 'isopod tongue' [is] not feeding as efficiently as a non-parasitized fish, [but] feeds more efficiently than a fish with no tongue at all [...]

The authors' claim is much more nuanced than the blunt conclusion as drawn in the wikipedia page that it is a fully functional tongue; while the effects on its host may be relatively mild, it may not replace all, or even any, physiological functions of the normal tongue.

Just to add to Christiaan's excellent answer: The authors of his cited study state:

[the tongues] replacement by a parasite would not appear to be a complex phenomenon.

Implying that this is a very basic process, according to what they observed.

To answer your question as it was posed:

Wikipedia states the tongue becomes fully functional. The authors of the study quoted by Christiaan also state two further pieces of information which may be of benefit to you.

I suppose that with 'fully functional' you mean innervated. However, the parasite merely has to perform a basic mechanical function, and may be directed by the remaining stub (though that is my own inference).

Not the answer you're looking for? Browse other questions tagged neurophysiology ichthyology parasitology parasitism or ask your own question.

2
How do parasitic fungi sense optimal fruiting conditions from inside the host?
2
How can a brainless Cnidarian hunt and defend itself?
14
How can action potentials be generated through thoughts?
4
How pain can stimulate the vagus nerve
8
How precisely can we sense temperature differences?
6
Can Biting Insects Detect Specific Places On A Host Body?
4
How can some animals see ultraviolet or infrared light?
4
How can binaural beats change mental state?
2
How many Watt-hours can an electric eel produce in a day?