Why do Kupffer cells not attack malarial sporozoites?

During malaria, why don't Kupffer cells (hepatic macrophages) attack the Plasmodium sporozoites and stop schizogony, thus saving us from the disease? 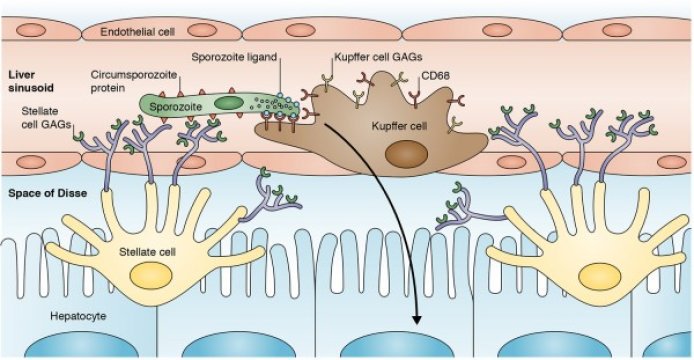 EDIT: What happens in Kupffer cells during traversal of sporozoites remains unkown to some extent. However, Frevert et al, 2008 has shown that sporozoites render Kupffer cells insensitive to pro-inflammatory stimuli and force them towards apoptosis (aka programmed cell death or "cell suicide"). This happens as sporozoite-exposed Kupffer cells are stimulated by lipopolysaccharide or IFN-$\gamma$, causing down-modulation of TNF-$\alpha$, IL-6 and MCP-1 and upregulation of IL-10. Nuclear factor NF-$\kappa$B is also activated, which causes apoptosis in Kupffer cells (Punsawad et al, 2014). However, if Kupffer cells are activated, in particular by immunization caused due to high antivody levels, they may phagocytoze the sporozoites and thus prevent their traversal (Krzych et al, 2015).

Not the answer you're looking for? Browse other questions tagged human-biology biochemistry cell-biology pathology malaria or ask your own question.

5
How are lysosome membranes protected from the attack of hydrolases?
3
Why do cells have an average 'life span'
2
How do T-cells determine which cells they've already inspected?
2
How do B and T cells work incorrectly in a person with Systemic Lupus Erythematosus?
8
Why some cells don't produce purines?
1
How long ago did the mutation arise that gives rise to sickle-cell disease?
2
Why do neutrophils need to die after pathogen phagocytosis?
12
Why do soap molecules not break down your skin cells when you wash your hands?