Can the dendrites of sensory neurons be a meter long?

The typical textbook structure of neurons is a cell with a short dendritic tree and a long axon. The dendrites receive information and send it to the axon via the cell body (soma). The axon is a long structure designed to send the information to distant parts.

Does this mean that the dendrites of sensory neurons are exceptionally long? Suppose I feel a prick in my finger, do the pain receptors really have dendrites a meter long all the way to the dorsal root?

Short answer
Axons can be over a meter long, but dendrites are never that long. Distance in the body is covered by axons. The dendritic part of skin receptors is generally considered to be the receptor part and the receptor part only. The elongated structure leading to the soma, as well as the axonal part to the spinal cord are generally considered to be one and the same axon, the soma being attached to the axon in this case.

The cell bodies are located in the dorsal root ganglia of the spinal cord. Action potentials are sent from the dendritic region in the skin to the cell body in the ganglion. From there on it is transmitted to spinal interneurons in the spinal cord and up to the brain.

The nomenclature of these sensory neurons is generally as follows: in the cell body the axon splits in two. The afferent part that transmits the pulses from the skin to the cell body and the part that transmits the signal from the soma away from the cell body to the spinal cord are both considered as a part of the axon. The dendritic region is generally considered to be the nerve ending (Fig. 2C). So the axons of peripheral sensory neurons, as well as motor neurons for that matter, can indeed be over a meter long (Lodish et al., 2000). 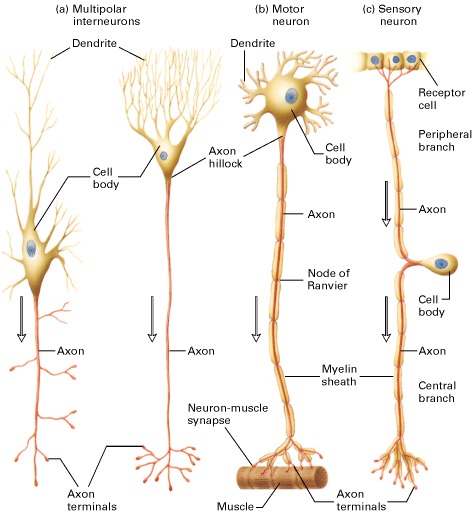 Fig. 2. Types of neurons. Arrows indicate the direction of conduction of action potentials in axons. (A) Multipolar interneurons. The dendrites receive signals at synapses with several hundred other neurons, and there is a single long branching axon. (B) A motor neuron innervating a muscle cell. Typically, motor neurons have a single long axon extending from the cell body to the effector cell. (C) A sensory neuron in which the axon branches just after it leaves the cell body. The peripheral branch carries the nerve impulse from the receptor cell to the cell body, which is located in the dorsal root ganglion near the spinal cord; the central branch carries the impulse from the cell body to the spinal cord or brain. Both branches are structurally and functionally axons, except at their terminal portions, even though the peripheral branch conducts impulses toward, rather than away from, the cell body. source: Lodish et al. (2000)

1
Neurology: spinal tract
6
Neurons with thousands of connections: where are the extra connections coming from?
4
Why are Merkel cells innervated by an axon, and not a dendrite?
6
Nerves, Neurons, Axons and Dendrites by Example
9
Single long axon vs serial neurons
2
Does every nerve ending send information to the brain separately?
2
Are sensory mechanoreceptors and mechanical nociceptors the same type of neurons or are they different?