How does valerian make you calmer?

Why do Valerian pills make us calmer? What is the mechanism behind it?

I understand how artificial tranquilizers work. Do valerian pill have similar chemical components?

Short answer
Valerian preparations contain many compounds, but it is not known which may be responsible for its sedative effects. It is likely that there is no single active compound and that valerian's effects result from multiple constituents acting independently or synergistically (source: NIH). Overall, I think it is safe to say that valerian's sedative properties are related to its GABAergic properties (Yuan, 2004).

Background
The constituents of the volatile oil obtained from the rhizomes (underground stems), and stolons (horizontal stems) of Valeriana spec are variable due to the variability in genetic make-up and environmental factors impinging on the batch of plants used (source: NIH).

The major constituents include the monoterpene bornyl acetate and a variety of sesquiterpenes including valerenic acid.

Some of the sesquiterpenes have been shown to have a direct action on the amygdala, which is a brain structure in the limbic system. The amygdala is responsible for feelings of fear and anxiety. Valerenic acid has been shown to inhibit the breakdown of GABA in the brain, resulting in sedation. GABA is the principal inhibitory neurotransmitter in the nervous system.

The non-volatile monoterpenes known as valepotriates possess sedative activity, but their mode of action is not clearly known. The valepotriates themselves act as prodrugs, and are transformed into homobaldrinal which has sedative properties.

Extracts of valerian roots contain substantial amounts of GABA which could directly cause sedation. However, whether GABA reaches the central nervous system is debated.

Another compound present in extracts is a lignan, hydroxypinoresinol, and it binds to benzodiazepine receptors, which are GABAA receptors and the target of benzodiazepines, i.e. tranquilizers and sedatives (Houghton, 1999).

Valeriana is an extract from the flower of Valerian. 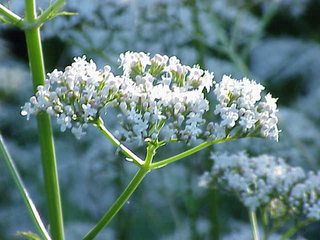 We don't know the mechanism by which it affect our physiology but we have a number of hypotheses.

Many chemical constituents of valerian have been identified, but it is not known which may be responsible for its sleep-promoting effects in animals and in in vitro studies. It is likely that there is no single active compound and that valerian's effects result from multiple constituents acting independently or synergistically [18, reviewed in 19].

Two categories of constituents have been proposed as the major source of valerian's sedative effects. The first category comprises the major constituents of its volatile oil including valerenic acid and its derivatives, which have demonstrated sedative properties in animal studies [6,20]. However, valerian extracts with very little of these components also have sedative properties, making it probable that other components are responsible for these effects or that multiple constituents contribute to them [21]. The second category comprises the iridoids, which include the valepotriates. Valepotriates and their derivatives are active as sedatives in vivo but are unstable and break down during storage or in an aqueous environment, making their activity difficult to assess [6,20,22].

A possible mechanism by which a valerian extract may cause sedation is by increasing the amount of gamma aminobutyric acid (GABA, an inhibitory neurotransmitter) available in the synaptic cleft. Results from an in vitro study using synaptosomes suggest that a valerian extract may cause GABA to be released from brain nerve endings and then block GABA from being taken back into nerve cells [23]. In addition, valerenic acid inhibits an enzyme that destroys GABA [reviewed in 24]. Valerian extracts contain GABA in quantities sufficient to cause a sedative effect, but whether GABA can cross the blood-brain barrier to contribute to valerian's sedative effects is not known. Glutamine is present in aqueous but not in alcohol extracts and may cross the blood-brain barrier and be converted to GABA [25]. Levels of these constituents vary significantly among plants depending on when the plants are harvested, resulting in marked variability in the amounts found in valerian preparations [26].

Because of valerian's historical use as a sedative, antiseptic, anticonvulsant, migraine treatment, and pain reliever, most basic science research has been directed at the interaction of valerian constituents with the GABA receptor.[16] Many studies remain inconclusive and all require clinical validation. The mechanism of action of valerian in general, and as a mild sedative in particular, has not been fully elucidated. However, some of the GABA-analogs, particularly valerenic acids as components of the essential oil along with other semivolatile sesquiterpenoids, generally are believed to have some affinity for the GABAA receptor, a class of receptors on which benzodiazepines are known to act.[17][18] Valeric acid, which is responsible for the typical odor of mostly older valerian roots, does not have any sedative properties. Valeric acid is related to valproic acid, a widely prescribed anticonvulsant; valproic acid is a derivative of valeric acid.[citation needed]

Valerian also contains isovaltrate, which has been shown to be an inverse agonist for adenosine A1 receptor sites. This action likely does not contribute to the herb's possible sedative effects, which would be expected from an agonist, rather than an inverse agonist, at this particular binding site. Hydrophilic extractions of the herb commonly sold over the counter, however, probably do not contain significant amounts of isovaltrate.[19] Valerenic acid in valerian stimulates serotonin receptors as a partial agonist.[20]

34
How and where, in the human brain, are memories stored?
9
Why has evolution made neurons use spiking?
10
How does the brain avoid feedback loops?
14
How does a neuron change as you learn?
6
How does the brain train its neural network?
6
Does some form of self organizing map exist in the brain?
10
How are neurons / synapses "biased"?
4
How to make GABA pass the blood brain barrier?