What is the direction of current flow in myelinated nerve cells?

Is it correct to say electric current flows through the extracellular space, or cytosol of a nerve fiber during impulse conduction?

I know that an impulse is actually a change of membrane potential which is transferred along the length of a neuron through transfer of ions (by a series of ion channels and pumps).

In myelinated axons our professor told us the following:

When a nerve impulse propagates along a myelinated axon an electric current (carried by ions) flows through the extracellular fluid surrounding the myelin sheath and through the cytosol from one node to the next.

How exactly does the current flow in myelineated nerve fibers?

During an action potential current flows across the neuronal membrane. Basically, during depolarization, Na+ goes into the cell, during repolarization K+ goes out. This process for a myelinated axon is shown in Fig. 1.

Action potentials in myelinated neurons jump from node to node, a process called saltatory nerve conduction. These nodes, called nodes of Ranvier, lack myelin and contain Na+ and K+ channels. Outside these nodes there is insulating myelin wrapped around the axon and the axonal membrane lacks Na+ and K+ channels there.

What happens during an action potential at a node is the following: Na+ rushes in at the node. Because of the insulating myelin in the next axonal segment leading up to the next node in line, Na+ can run through the axon to the next node without much signal loss. This passive spread of depolarizing current is much faster than repeatedly generate a new action potential along the length of the axon.

To answer your questions now:

Question: Is it correct to say electric current flows through the extracellular space or cytosol of a nerve during impulse conduction?

Answer: Yes... and no. No, because electric current and notably Na+ and K+ flow perpendicular to the axonal membrane during action potentials. Yes, because the Na+ ions do move through passive current spread through the axon to the next node.

Question: How exactly does the current flow in myelineated nerve fibers?

Answer: Your professor was spot on. During depolarization, ions (notably Na+ in this case) are carried from the extracellular space through Na+ channels in the node of Ranvier to the intracellular space. From there it spreads through passive diffusion to then next node. 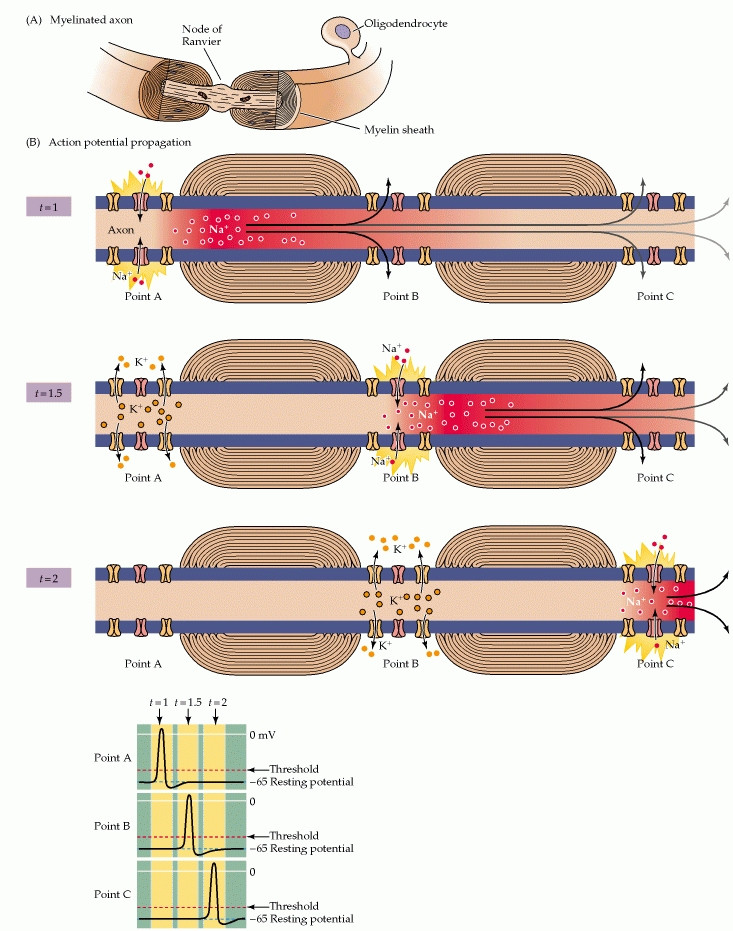 Not the answer you're looking for? Browse other questions tagged neuroscience homework electrophysiology or ask your own question.