Why does the intensity of an action potential once generated at the trigger zone remain undistured throught the axon?

What causes this consistency? I read the previously asked questions on this site none of them carry an answer to this question.

Actually, it would be better to say that action potential does not travel but is regenerated anew in a sequence along the axon.

I would like to elaborate how this happens and why this is the reason why the action potential stays constant:

Explanation- To know why nerve impulse transmission is consistent, lets first know how it is transmitted, for which we should know how it is generated.

Generation- At rest (no impulse), outside of neuron i.e. ECF (extra-cellular fluid) has more positive charge and inside of neuron has relatively less positive charge or more negative charge. This is maintained by keeping Na+ outside and allowing K+ to move freely between inside outside. It is done by action of voltage-gated ion channels like closing of Na+ channels and keeping K+ channels open, and through Na+/K+ ATPase which transports 3 Na+ outside for bringing 2 K+ inside, and K+ can again freely move outside down the concentration gradient. This results in a resting membrane potential of -70mV i.e. depolarization.

When neuron receives a stimulus, its Na+ channels open and K+ channels close which causes an influx of Na+ which results in more positive charge inside and negative charge outside. This is the action potential of neuron of about +30mV (value varies, I have taken from here, for variations in AP see this). It lasts for less than 1/1000 of a second as Na+/K+ pump starts working again immediately and K+ channels open and Na+ channels close again to recover the resting potential of neuron i.e. repolarization. 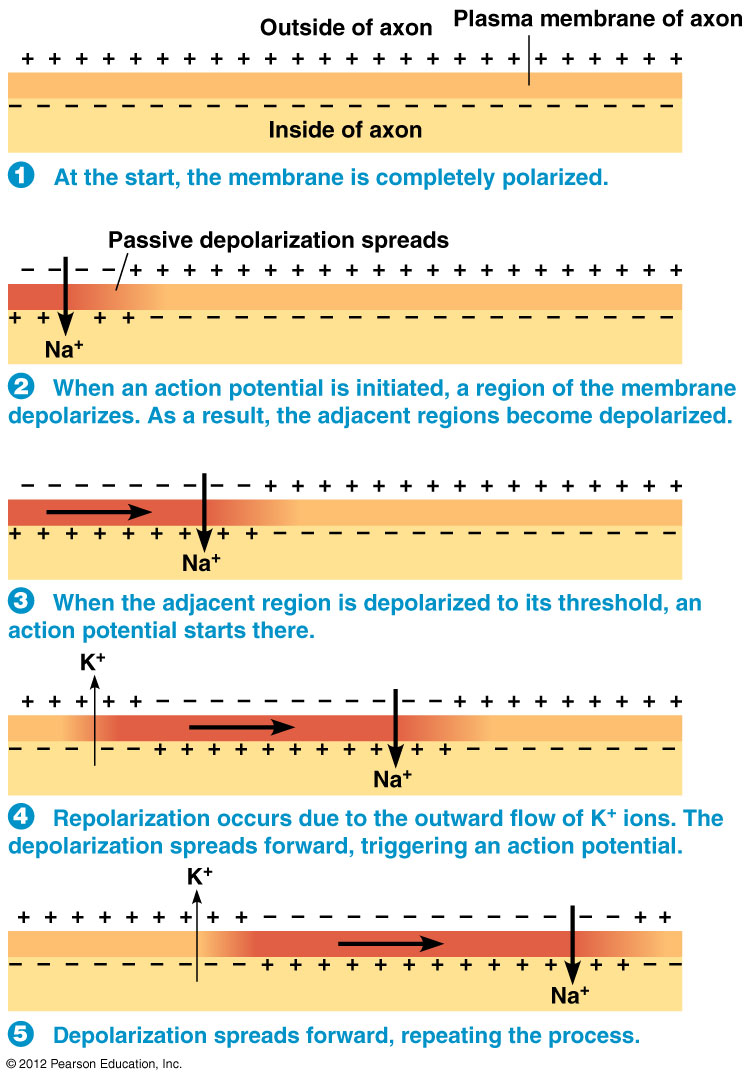 Source This also explains why nerve impulse does not travel in reverse direction i.e. due to repolarization state of neuron at the previous site during which it cannot transmit any impulse. 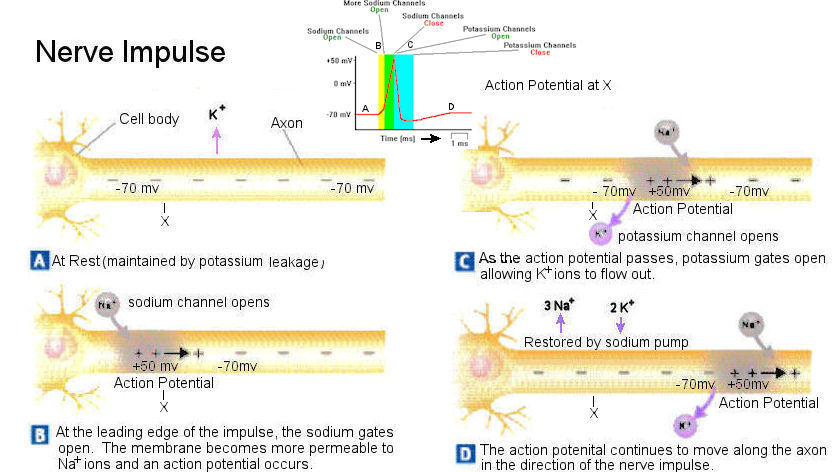 i.e. if a stimulus has the threshold potential (-40mV to -55mV), it will always generate nerve impulse of same action potential (+30mV) otherwise no action potential will be generated and transmitted i.e. it will be consistent everywhere.

Similar answer has been posted by @Thawn too. I have added some more explanation and citation to this answer.

EDIT 1- You may find an answer to How does a change in the potential across a neuron's membrane get turned into a signal that is sent down the axon? helpful which says:

the sodium gates open the more positive the voltage is, which in turn opens more sodium gates. If a patch of neural membrane is depolarized, the charge diffuses into the nearby patches of neural membrane. This will open the sodium channels of the nearby membrane patch. Now once enough sodium channels open, the neuron will fire a action potential, at this point potassium channels open and potassium rushes out of the cell repolarizing it(making it more negative). Furthermore the sodium gates close at positive voltages which further repolarizes the neuron and prevents back propagation. 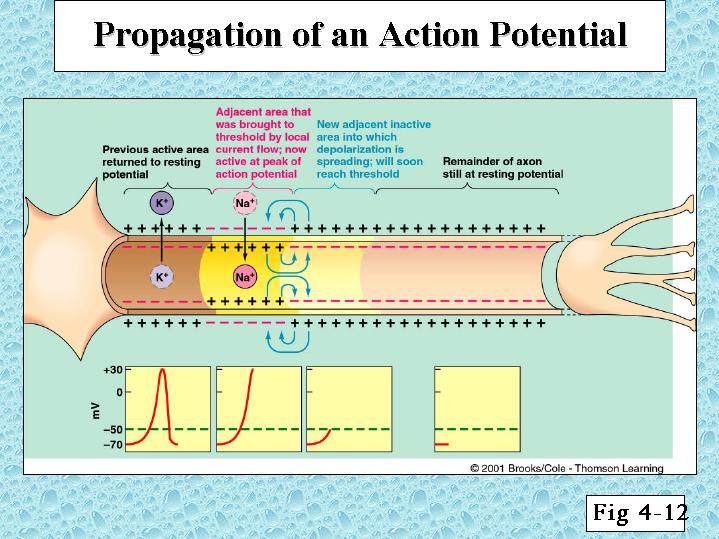 EDIT 2- Thus propagation of ions in axon can be, as pointed out by @Thawn, categorised as:

2. Along the length- this type of movement is responsible for transmission of nerve impulse through the axon. It is parallel to length of axon. Since there is no membrane in length of axon, this type of movement is thus governed only by diffusion. As Na+ enters cytoplasm of axon, it diffuses to adjacent areas. But since previous (depolarized) area already has high concentration of Na+, so its net movement is towards the next (polarized) area, which becomes the cause for depolarization of that area. This is similar for K+, Cl- and other ions (like protein-derived anions).

Not the answer you're looking for? Browse other questions tagged neurophysiology electrophysiology or ask your own question.

6
How does a change in the potential across a neuron's membrane get turned into a signal that is sent down the axon?

4
Doubling the concentration of extracellular calcium hyperpolarizes a neuron. Why?
4
Why does the nerve action potential needs potassium?
2
What information does the nociceptor relay to the brain about stimuli below threshold?
7
Why does the "all-or-none" principle hold true for only single nerve cell, and not a bunch of nerve cells?
6
Does a generator potential pass along a nerve the same way an action potential does?
2
Where does the initial action potential come from?
0
Why myelin sheat does not cover the whole axon?
3
The information carried by nerve signals