Why do we only initially feel the bending of a hair?

In my neurobiology class, my professor prompted us to take the tip of our pencil and fold or push down a single strand of hair on our arm or leg in the opposite direction that it grows in. He then commented on how we are able to detect the initial stimulus, but how after a while we no longer feel the hair being bent.

My question is thus, why does this occur? Why would we suddenly no longer be able to feel the stimulus of the hair being forced back?

Background
There are various touch receptors in the skin (Fig. 1). One of them is the hair follicle receptor. These receptors form sensory nerve fibers that wrap around each hair bulb. Bending the hair stimulates the nerve endings.

All the afferent fibers of the skin receptors in the skin show neural adaptation. A rough classification of the various skin receptors is grouping them in rapidly and slowly adapting fibers.

Fig. 1. shows a static stimulation of the various receptors. Upon initial stimulation, the hair follicle receptor (Fig. 1a) vigorously fires action potentials. Because the hair follicle receptor rapidly adapts, however, it soon stops responding when the hair is continuously, statically bent in that same direction. Once the stimulus is removed it fires another volley of action potentials because the hair moves again.

In other words, the hair follicle receptor responds to strokes, stretch and skin vibrations, as it is a novelty detector; it detects change, just like Pacinian and Meissner's corpuscles do (Fig. 1b,c). This opposed to Merkel cells and Ruffini endings (Fig.1d,e) - these receptors are designed to continuously fire action potentials upon a static pressure stimulus (Fig. 1), although even these receptors eventually give up and become unresponsive. 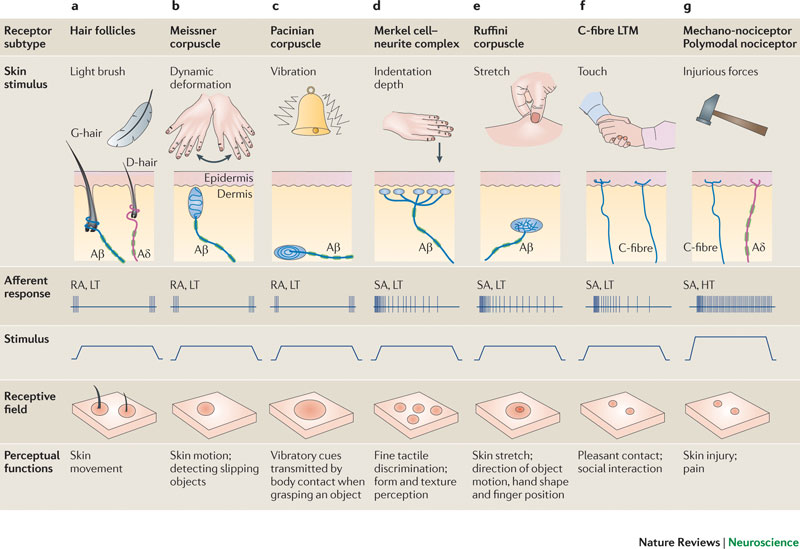 Not the answer you're looking for? Browse other questions tagged neurophysiology touch or ask your own question.

10
What is the mechanism behind tinnitus?
6
Why does the refractory period of neurons only allow signals to pass in one direction?
8
What is the smallest touch sensation that a human can feel?
7
Why does the "all-or-none" principle hold true for only single nerve cell, and not a bunch of nerve cells?
0
Why are the neurites from hair cells to spiral ganglion cells called axons?
2
Why do we feel numbness and an electric sensation in our legs after standing for too long?
2
What is the signal conversion from hair cells to cochlear nerve cells?
3
Why/how does exposure to noise cause cochlear hair-cell loss?
1
how do we feel electricity on skin even though merkel cells are pressure sensitive only?