Does the species of snake that eats Amphidromous inversus have chiral dimorphism?

From what I read at Schilthuizen and Davison (2005), Amphidromous inversus is a species of snail that occurs in 2 forms that are nearly mirror images of each other occurring in nearly equal proportions. I don't see any way that could be evolutionary stable if it was only eaten by snakes with a symmetrical jaw because then the snake species would evolve to be ambidextrous and then the snails would lose the selection pressure for being the rarer form but retain the selection pressure for the more common form. I can't find the information anywhere on the internet of what the snake species that eats that species of snail looks like. Have observations shown that that species of snake has a chiral jaw and occurs in 2 forms that are mirror images of each other in nearly equal proportions?

I don't know much about this particular species of snake but here are some info that may help.

What do we mean by right-handed snakes?

I doubt that in this context a snake could be ambidextrous. What they call handedness in these snakes (Pereatids) concerns the density and size of teeth on each side of the jaw (pictures from Hoso et al. (2010)) 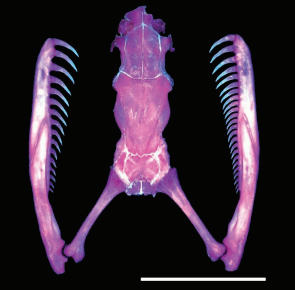 This asymmetry helps them to forage on snails. 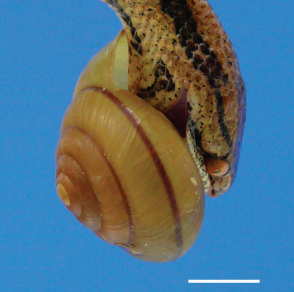 Here is how they describe the snake feeding behaviour.

The Japanese pareatid, P iwasakii, strikes an exposed soft part of a crawling snail from behind at a determined leftward angle to grasp the ventral shell surface with the upper jaw and the soft body by inserting the mandibles into the aperture. The snake then extracts the soft body by alternately protracting and retracting the asymmetric right and left mandibles.

Hoso et al. (2007) report that "left-handed" snakes have never been found in south-east Asia. This is surprising as noted by Hoso et al. (2010). Even in areas where sinistral snails are relatively common, all snakes were "right-handed".

They do not suggest any potential explanation for this lack of "left-handed" snakes but one could speculate that "handedness" in snakes might be under other selection pressures than those related to foraging. It is also possible that intermediate forms are deleterious and that mutation of large enough effect are rare. It is possible that the genetic variance for handedness is just not present. It is possible that even if in some areas there are more sinistral species of snails than dextral species, the abundance of dextral is still higher and therefore, there is no selection for switching to being right-handed.

Not the answer you're looking for? Browse other questions tagged evolution natural-selection evolutionary-game-theory or ask your own question.

3
Why might the chirality of gastopods be dominantly dextral?
1
What are the different causes for a snail species to have chiral dimorphism or speciate into a new species of the opposite form?

0
Evolutionary chronology - if any, which species have evolved in the last 100 years
3
Is an egg classified based on the species inside it, or by the species that laid it?
0
Are inadvertent environmental catastrophes also examples of natural selection?
4
Does a virus that spreads more rapidly have less chance to evolve?