What determines whether a substance can diffuse across the blood-brain-barrier?

What determines whether a chemical substance is able to cross the blood-brain-barrier via passive, transmembrane diffusion? What structurally differentiates these chemicals?

Short answer
The two most important factors that favor passive diffusion across the blood-brain-barrier (BBB) are:

And to a lesser extent: 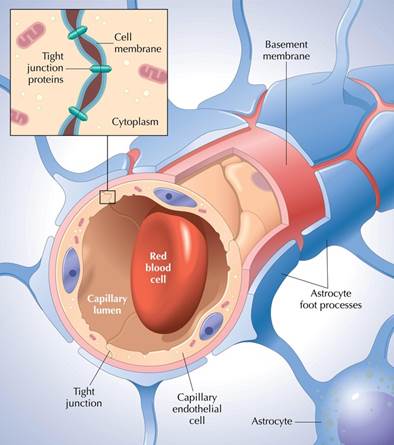 Most drugs cross the blood-brain-barrier (BBB) by transmembrane diffusion, which is mainly dependent on whether the drug is able to meld into the cell membrane. A low molecular weight and high degree of lipid solubility favor this mechanism. However, a drug taken up by the membranes in the BBB must eventually dissolve into the aqueous environment of the brain's interstitial fluid to take effect. As a result, a substance that is too lipid soluble collects in the lipid portion, but is not able to leave the BBB. I.e., it enters the BBB, but doesn't cross it.

Moreover, lipid solubility also favors uptake by the peripheral tissues; this, in turn, lowers the concentration of the drug in blood.

Thus, while lipid solubility can increase transport rate across the BBB, it can also lower the amount of the drug presented to the BBB.

Factors in addition to lipid solubility include charge, tertiary structure and degree of protein binding. Chief among these secondary factors, however, is molecular weight. The best approximation of the influence of size on BBB penetration is that it is inversely related to the square route of molecular weight. Few substances over 500 Da cross the BBB. In addition, lipid-soluble substances with molecular weights over 400 Da can be substrates for P-glycoprotein, a major brain-to-blood efflux pump located at the BBB, which prevents or greatly retards a large number of small, lipid soluble molecules from entering the CNS. However, Peptides and proteins with molecular weights in excess of 600 Da are known to cross the BBB in amounts sufficient to affect CNS function, such as the enkephalins. The largest substance found to date to cross the BBB by the mechanism of transmembrane diffusion is cytokine-induced neutrophil chemoattractant-1 at 7.8 kDa (Banks, 2009).

Note that some parts of the brain do not feature a BBB, including but not limited to, the pituitary, area postrema and pineal gland. Many of these areas participate in hormonal control. These structures hence need to be in contact with the blood stream to sense the presence of hormones and other compounds (source: University of Texas).

Not the answer you're looking for? Browse other questions tagged biochemistry neuroscience physiology or ask your own question.

0
Is breathing in deodorant fumes dangerous for my brain?
7
Difference between facilitated diffusion and secondary active transport in cells
0
Absorption of digested food in small intestine
3
What is the difference between neurotransmitters acting as neurotransmitters and hormones?
4
How to make GABA pass the blood brain barrier?
2
Can cerebrospinal fluid pass through the pia mater or ependymal cells of the ventricles?
2
To what extent does loss of neurons in the substantia nigra affect movement?
4
Why is urobilinogen reabsorbed from the gut just to be excreted via the kidneys?
1
How does glucose uptake happen in the various tissues of the body?
3
Besides fats, proteins, and carbs, what compounds can the body use for energy?