Why are skin moles (pigmented spots) circular in shape?

I have never seen a rectangular or triangular shaped mole. Is there any reason for why moles are roughly circular in shape?

Note: I am not stating that moles are in general circular in shape because there are no statistical studies to conclusively state so. This answer is mostly about default circular shape of cell colonies.

Moles (melanocytic naevi) are not strictly circular but generally have have a rough circular shape. Moles can have irregular shapes too and you can easily check that by a simple google image search.

The exact causes and mechanisms of mole formation are not known but the somewhat circular shape can be explained by a simple spatiotemporal model of growth.

Moles are formed because of pigmented cells called melanocytes (which contain the dark pigment melanin). A mole would grow when a very small population of these pigmented cells divide and expand. In a 2D surface, cells would continue to divide and expand along both the axis at an equal rate, if there are no specific constraints. Since the expansion is same along both the axes, you get a roughly circular shape. For similar reasons, bacterial colonies (on petri plates) are also more or less circular. Note that there are stochastic factors that would contribute to irregularity.

Triangles and rectangles are very specific geometries. There need to be some constraints that would limit the cell growth to adopt these geometries. So the default shape would be mostly circular.

Short answer
Naevi do not have to be circular in shape. In fact, they come in a wide variety of shapes and colors.

Background
A beauty spot, or mole is called a naevus. Naevi (plural) are formed by the growth of the pigment cells in the skin, the melanocytes .

There are various types of naevi:

Now let's turn to your question - not all naevi are circular. Below I have illustrated just a mere tiny handful of the wide gamut of shapes found among different types of naevi. In fact, naevi come in a wide variety of shapes and colors (source: Dermatology Net NZ):

In fact, naevi occur in more extreme forms too: 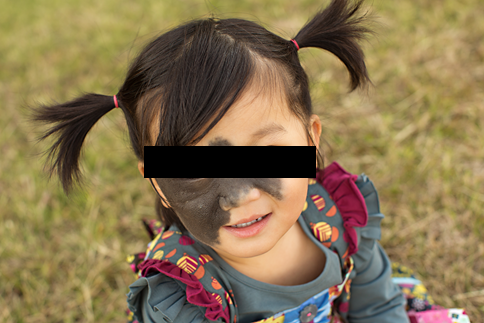 source: No Hands but Ours

Not the answer you're looking for? Browse other questions tagged cell-biology skin tissue or ask your own question.

2
Exotic Cell Shapes
1
Bacterial Cell Problem
3
Do goosebumps always appear in the same spots on the skin?
3
Why do some moles grow longer and darker hair than the rest of the skin?
19
Why are sushi proteins called "sushi"? What are the origins of this name?
3
Why are aminoglycoside antibiotics particularly effective for aerobic gram negative bacteria?
5
Is aneuploidy/aneusomy only a problem for cell division?