what is meta-sympathetic nervous system?

As @mgkrebbs says, metasympathetic nervous system is still a matter of debate and is not fully accepted in the scientific world due to lack of research and evidence.

On the basis of a number of structural and functional indices, application of pharmacological analysis as well as recording of neuronal activity, the autonomic nervous system is subdivided into the sympathetic, parasympathetic and metasympathetic parts. The metasympathetic system includes the complex of microganglia situated in the walls of visceral organs and having marked motility activity (the heart, ureters, intestine, stomach). According to the localization, separate areas of this system can be defined by its site (for example, the cardiometasympathetic area in the heart). The metasympathetic system attains the features of true autonomy. Its cells have no direct connection with the high centers: this connection is established through mono- and polysynaptic sensory and afferent units of sympathetic and parasympathetic nature.

One major difference is in the location.

includes the complex of microganglia situated in the walls of visceral organs and having marked motility activity (the heart, ureters, intestine, stomach).

consists of cells with bodies in one of two locations: the brainstem (Cranial Nerves III, VII, IX, X) or the sacral spinal cord (S2, S3, S4). These are the preganglionic neurons, which synapse with postganglionic neurons in these locations:

For detailed location, see this image: 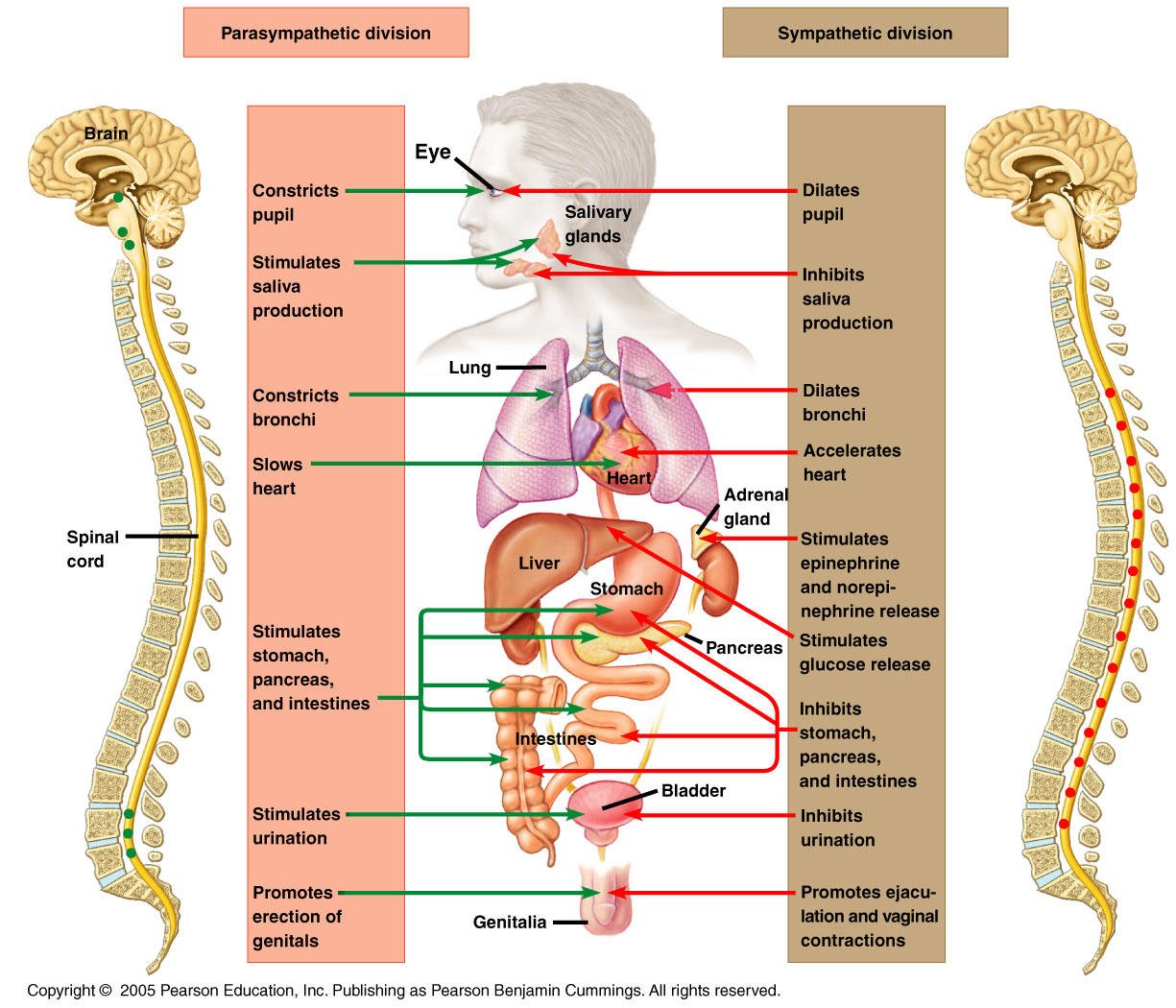 The concept of a metasympathetic part of the autonomic nervous system (distinct from the sympathetic and parasympathetic parts) seems to be an idea discussed almost exclusively in the Russian scientific literature.(src) Many, if not a majority, of the papers concerned with it seem to have one A. D. Nozdrachev as one of the authors. He has been publishing on it at least since 1980 ("Structuro-functional organization of the vegetative (autonomic) nervous system"); most recently is from 2006 quoted in another answer ("The Metasympathetic System of the Brain"). The presentation in the latter paper seems almost incoherent to me, and apparently not due to translation. This idea doesn't seem to have much traction, particularly outside of Russia.

The concept of the meta-sympathetic system is founded by singles in Russian of the 80's. This theory wasn't accepted in the academic or scientific world. The most of the results in PubMed shows that they are from Russian, and a some of them are even from the same person (which published it on 80's and came back in 2006 with a new publishing of his theory, unsuccessfully.

The theory about meta-sympathetic system is not studied at the universities of the western countries such as US, Israel, UK, Australia, Canada etc. I talked with scientists from all these countries which told me these things. We can't even find any mention about this theory in the professional textbooks of biology or physiology such as Campbell biology and more.

Look at this conversion also: https://en.wikipedia.org/wiki/Wikipedia:Reference_desk/Science#what_is_meta-sympathetic_system.3F

Not the answer you're looking for? Browse other questions tagged neuroscience autonomic-nervous-system or ask your own question.

3
What can myelination tell you about the evolution of sensory receptors?
4
Why do negative ions flow into a cell in an inhibitory synapse, even though a neuron has a negative resting potential?
5
Are the sympathetic and parasympathetic nervous systems exact opposites?
2
Can the brain influence gene expression?
3
What is the difference between neurotransmitters acting as neurotransmitters and hormones?
4
What exactly does Curare do to the peripheral nervous system?
6
Are there any organisms, extant or extinct, that have only one neuron?
5
Can stress and arousal be independent?
1
What does it mean to say that the sympathetic nervous system is organized for diffuse activity?