Question about radiation and how it affects biological systems

I'm doing research on the effects of radiation, and specifically UV, X-Ray and Gamma radiation, on biological systems at the cellular level and beyond. I understand that radiation types can be classified by their wavelength, with the gamma radiation being of the shortest wavelength and thus highest energy.

How does this measure of wavelength relate to the unit rads, or radiation dosage? And how do they both affect the survivability of cells? I can understand that the lower the wavelength, the higher the energy and it will affect the cells more adversely at those levels, but how does rads relate to that?

Equal doses of all types of ionizing radiation are not equally harmful. Alpha particles, for example, produce greater harm than do beta particles, gamma rays and X rays for a given absorbed dose. Alpha radiation is the most dangerous because it is easily absorbed by cells. Beta, gamma an X radiation are not as dangerous because they are less likely to be absorbed by a cell and will usually just pass right through it (source: BBC).

To account for this difference, radiation dose is expressed as equivalent dose in units of sievert (Sv). The dose in Sv is equal to absorbed dose" multiplied by a radiation weighting factor (WR - see Table 1 below). Prior to 1990, this weighting factor was referred to as Quality Factor (QF).

Note that the heaviness of the alpha particle makes its penetration rates very low. Hence, it will not easily penetrate through the outer layers of the skin. 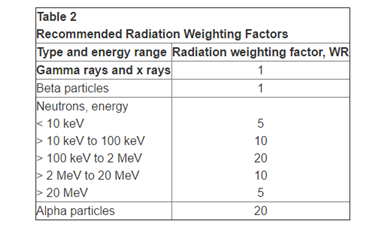 Shorter wavelength UV begins to have enough energy to break chemical bonds. X-ray and gamma ray radiation, which are at the upper end of the EM spectrum, have high frequencies (~100 billion billion hertz). Radiation in this range has high energy and it can strip electrons from an atom or even break up the nucleus of the atom.

The process in which an electron is given enough energy to break away from an atom is called ionization. It results in the formation of two ions: the molecule with a net positive charge, and the free electron with a negative charge. Each ionization releases a large amount of energy which is absorbed by the surrounding tissues.

There are three main kinds of ionizing radiation:

So in the EM realm, frequency is proportional to energy and hence to tissue damage (Fig. 2) and hence to rads. 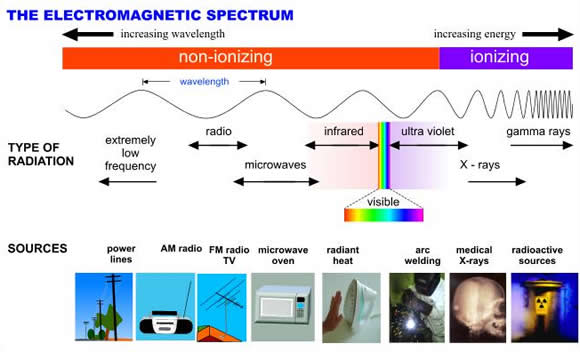 Not the answer you're looking for? Browse other questions tagged physiology terminology biophysics radiation or ask your own question.

16
How are long time periods measured in biological systems?
2
Radiation and "Safe Dose"
5
About radiation therapy
1
Cesium-137 From Fukushima Meltdown
1
When muscles contract is the process similar to how non-newtonian fluids react?