Why is active transport needed in repolarization?

During the repolarization phase of an action potential, the potassium ions diffuse out of the cell, and active transport begins.

What I do not understand is why active transport is needed when the movement of ions is not against their concentration gradient?

Since the potassium ions have diffused out in repolarization, only the sodium ions are left in the intracellular space.

Is it because the active transport allows the imbalance to occur (3 out and 2 in)?

...when the movement of ions is not against their concentration gradient...

...potassium ions have diffused out in repolarization, only the sodium ions are left in the intracellular space

...moving out of the cell where there are no sodium ions...

This is incorrect; there are Na+ ions out of the cell, heaps in fact. You should be aware that the flux of ions is not an all-or-nothing phenomenon. It is a flux of relatively few ions out of a pool of them. Action potential formation and ion gradients are membrane-bound phenomena. While Na+ may enter the cell during an action potential, there is still a nearly infinite large amount of Na+ left in the intercellular space. 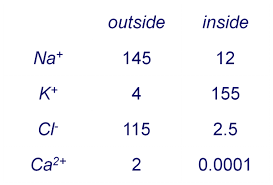 Table 1. approximate ion concentrations in and out of the cell. source: Med Quarterly

Not the answer you're looking for? Browse other questions tagged neuroscience electrophysiology action-potential or ask your own question.