Function of the alpha subunit in mitochondrial ATP-synthase?

Within the catalytic core of mitochondrial ATP-synthase there are two different types of subunits; $\alpha$ and $\beta$. From what I have read, the catalytic sites occur only in the $\beta$ subunit so clearly it is in these where ATP is synthesised.

However, I can't find what the function of the $\alpha$ subunit is. A source would be appreciated.

Wikipedia tends to answer your question by this (emphasis mine):

For above information, wikipedia cites this. I have put some info from it below. 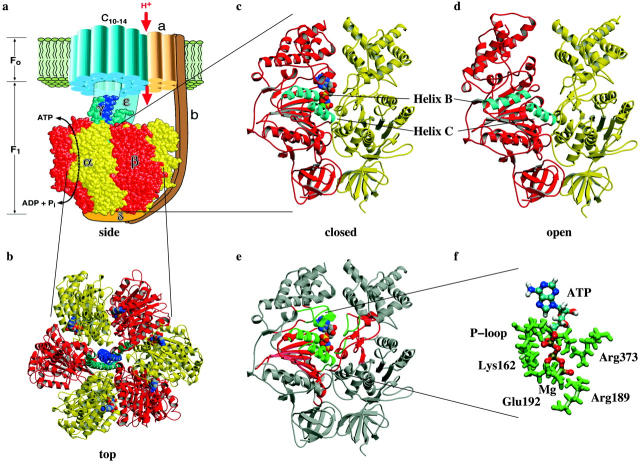 There are three regions to which ATP is hydrogen bound. First, the so-called Walker or P-loop (residues β-Gly-159-β-Val-164) at the beginning of helix B. Second, the beginning region of helix C, namely β-Arg-189. And third, the residue α-Arg-373 from the α-subunit (see Fig. 1, c–e) (Abrahams et al., 1994). Sequential formation of these 15–20 hydrogen bonds ensures nearly constant force generation throughout the whole duration of the binding transition. This “binding zipper” sequence would lead to the smooth closing motion of the pocket and continuous conformational changes throughout the β-subunit (Oster and Wang, 2000a; Elston et al., 1998; Oster and Wang, 2000b).

Fig. 4, a–d provides four representative snapshots of the equilibrated closed and open binding pockets according to our simulations. These show that, in the closed pocket, the ATP molecule is surrounded by all three hydrogen binding regions. By contrast, in the open pocket a space has formed between the P-loop on one side and the helix C and the pocket's α-subunit region on the other side, with a gap between the ATP molecule and the P-loop so that ATP stays close to the α-subunit and helix C regions. An equilibrated intermediate structure where the pocket is half open is shown in Fig. 4 b. In that state the α-phosphate oxygen of ATP is still close to the P-loop, but the distance is already increasing between the β/γ-phosphate oxygens and the P-loop. The phosphate axis has rotated ∼30° and ATP is bridging the pocket. At the end of our simulations (Fig. 4 d), the ATP molecule is located between the two subunits as expected after its primary movement into the binding pocket. In that weak binding state, a newly docked ATP is expected to have contacted the ATPase, but not yet have induced conformational changes. Our simulations are consistent with this expectation. Further, we see that contacts are formed mainly between ATP and Mg2+, and between Mg2+ and the binding pocket.

You can find further information here or here.

Mitochondrial membrane ATP synthase (F1F0 ATP synthase or Complex V) produces ATP from ADP in the presence of a proton gradient across the membrane which is generated by electron transport complexes of the respiratory chain. F-type ATPases consist of two structural domains, F1 - containing the extramembranous catalytic core, and F0 - containing the membrane proton channel, linked together by a central stalk and a peripheral stalk. During catalysis, ATP synthesis in the catalytic domain of F1 is coupled via a rotary mechanism of the central stalk subunits to proton translocation. Subunits alpha and beta form the catalytic core in F1. Rotation of the central stalk against the surrounding alpha3beta3 subunits leads to hydrolysis of ATP in three separate catalytic sites on the beta subunits. Subunit alpha does not bear the catalytic high-affinity ATP-binding sites.

There is a substrate-binding site on each of the alpha and beta subunits, those on the beta subunits being catalytic, while those on the alpha subunits are regulatory. The alpha-subunit contains a highly conserved adenine-specific non-catalytic nucleotide-binding domain, with a conserved amino acid sequence of Gly-X-X-X-X-Gly-Lys. The alpha and beta subunits form a cylinder that is attached to the central stalk. The alpha/beta subunits undergo a sequence of conformational changes leading to the formation of ATP from ADP, which are induced by the rotation of the gamma subunit, itself is driven by the movement of protons through the F0 complex C subunit [PMID: 12745923].

The α- and β-subunits have a similar fold, as would be expected from their sequence similarity. All of the α- subunits are bound to the ATP analogue AMP–PNP, and the three subunits adopt very similar conformations. The three β-subunits, however, are in three nucleotide-bound states: the first, termed βTP, has AMP–PNP in the catalytic site (FIG. 3c); the second (βDP) has ADP; and the third (βE) has no bound nucleotide (FIG. 3c–e). So, the native structure of F1 looks like a snapshot of the working rotary engine, with three reaction chambers representing the moment just after exhaust and intake (βΕ), ignition (βDP) and compression (βTP) (BOX 2). The lower part of the slightly bowing, asymmetric coiled-coil structure of the γ-subunit is displaced towards the βE , forcing the carboxy-terminal domain of this β-subunit to swing ~30° downwards. Thus, the βE adopts the ‘open’ (O) form, whereas βTP and βDP have the ‘closed’ (C) form.

9
How does the enzyme ATP Synthase use a proton concentration gradient to make ATP?
24
How fast does the rotor in ATP synthase spin?
2
Dwell time equations for ATP-sythase?
4
Is there a difference between "Alpha Helix" and "Alpha subunit"?
6
Bacteria trapped in crystal inclusions found 'alive' after 50,000 years - what were they eating all that time?
11
In which direction does ATP synthase rotate?
0
ATP Synthase EC number