In eukaryote pre-mRNA I am having a little trouble grasping exactly what the 5 prime untranslated region is defined as.

It seems that it could be defined as the difference in pre-mRNA between the transcription and translation, is that right?

The 5′-UTR region of a eukaryotic mRNA is derived from the RNA transcript of the region of a gene between the transcription start site and the DNA corresponding to the translational initiation codon. It differs from that region of the initial transcript in most cases by having a modified guanosine nucleotide added at the 5′-end in a ‘cap’ structure, and in some cases by lacking an intron present in the former.

The Transcriptional Start Site (TSS) and the Promoter

This answer is in terms of the TSS rather than ‘promoter region’ or ‘promoter sequence’, favoured by the questioner because in eukaryotes, at least, there is no simple and easily definable promoter sequence. A 2012 review of metazoan promoters begins with the definition: “Gene promoters are the loci overlapping transcription start sites (TSSs), at which the total regulatory input of a gene is integrated into the rate of transcriptional initiation. The immediate role of the promoter is to bind and correctly position the transcription initiation complex…”.

A simplified diagram of some components of human promoters (adapted from an earlier review by Hahn) is shown below. The position of ‘Inr’ — the Initiator box which contains the TSS — varies with respect to the TATA box (usually from –25 to –30 in humans), as does its sequence. Hence, even ignoring the alternative TSSs mentioned by @Luke it is not possible to identify the TSS unequivocally by inspection of the DNA sequence of a gene in the way the questioner would apparently wish.

It should be mentioned that it also not possible to identify the mRNA translational initiation codon unequivocally by inspection of the DNA sequence of a gene. Although 90% or more cases follow Kozak’s rule, so that it corresponds to the first ATG, in some cases it may correspond to the second ATG, and in a small minority — where internal initiation occurs — to some distal ATG. There are also a very few examples of initiation of translation at codons other than AUG.

Introns in 5′-UTR regions of pre-mRNA

A common rationalization of the intron/exon nature of eukaryotic pre-mRNA is in terms of alternative splicing to produce different protein sequences. Perhaps because of this, the presence of introns in the primary transcript containing the 5′- and 3′-UTRs is often ignored (see Bicknell et al. for a review). In fact, approximately 35% of 5′-UTR precursors contain introns, not present in the mature mRNA.

The vast majority of eukaryotic mRNAs have a cap at their 5′-end, produced by the addition of a guanosine nucleotide in a 5′-5′ pyrophosphate linkage to the 5′-residue (usually A) of the pre-mRNA. This is subsequently methylated at carbon-7; and 2′-O-methylation of the ribose of the subsequent one or two nucleotides may also occur. 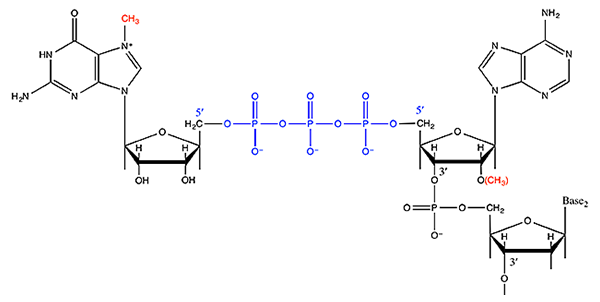 Although “DNA makes RNA makes Protein”, I do think it important to describe features of information molecules in terms of their actual composition. Thus, the 5′-UTR has to be defined in terms of mRNA, not promoters or exons. If one makes reference to the information content of DNA or RNA than I think a form of words should be used to make that clear. Muddled forms of words can easily lead to muddled thinking.

The 5' UTR on the mRNA includes sequence from the Transcriptional Start Site (TSS) to the first exon. Promoters are usually associated with a corresponding TSS.

To expand: a gene may have multiple TSS' which may be promoted under different circumstances (e.g. with different factors present). We therefore have the concept of a TSS region "The region of a gene from the 5' most TSS to the 3' TSS" (link). TSS have to be empirically determined, and seem to vary by tissue (a database of all known TSS has been accumulating evidence since 2002: DBTSS). I have just performed a search for gene APOE (chr 19) and this is a small excerpt of the data presented, just to give an idea: 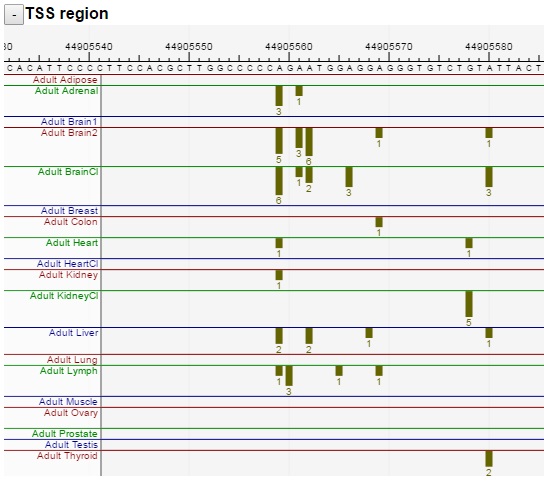 So the TSS for a gene is context dependent on the when/where the transcript is being produced.

In searching for further information I found a paper that describes the 5' UTR on the mRNA, which is not necessarily an exact copy of the genomic DNA (e.g. by addition of the cap). Here is the corresponding paragraph and diagram, which explains it better than I can paraphrase (highlighting by me):

Transcriptional control is mediated by transcription factors, RNA polymerase and a series of cis-acting elements located in the DNA, such as promoters, enhancers, silencers and locus-control elements, organized in a modular structure and regulates the production of pre-mRNA molecules, which undergo several steps of processing before they become functional mRNAs. Introns are removed, a 7-methyl-guanylate (m7G) cap structure is added at the 5' end of the first exon, and a stretch of 100-250 adenine residues (the poly(A) tail) is added at the 3' end of the last exon, which is itself generated by endonucleolytic cleavage of the primary transcript. Sometimes the sequence of the mRNA is also altered in a process called mRNA editing, and the resulting coding sequence of the mature RNA differs from the corresponding sequence in the genome. The resultant mature mRNA, in eukaryotes, has a tripartite structure consisting of a 5' untranslated region (5' UTR), a coding region made up of triplet codons that each encode an amino acid and a 3' untranslated region (3' UTR). Figure 1 shows these and other features of mRNAs. 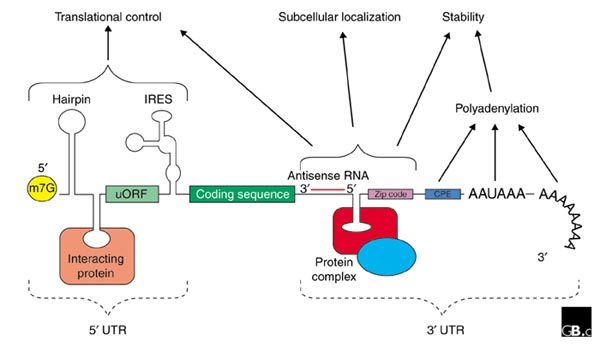 To conclude my answer (apologies for its lack of brevity) there are different types of promoter, not all of which directly include a TSS, but the majority of promoters are called "Major promoters" and do include the TSS (in addition to the RNA polymerase binding site, and other transcription factor binding sites).

The UTR is the region of the transcript upstream of the starting methionine. The promotor is not itself transcribed.

2
Are eukaroytic promoters located in the 5' UTR region?
0
can a point mutation cause a frameshift?

4
How do eukaryotes terminate transcription? (clarification on Campbell Biology)
3
Does DNA polymerase I require a $3^\prime$ end?
1
Relationship between DNA strands and mRNA
7
DNA & mRNA During Transcription
4
Is the start codon regarded as part of the UTR (untranslated region)?
2
Is the promoter region of a gene transcribed?
3
How is mRNA directed out of the nucleus to its ultimate cytoplasmic location?
3
The shape of mRNA