How do stem cells produce 200 billion new blood cells every day? Does 1 stem cell division result in production of just 1 blood cell or many?

It is given on wikipedia that everyday 200 billion new blood cells are produced in the bone marrow. I want to understand how this is achieved. Does one hematopoietic stem cell's single division result in just one blood cell produced, or many so as to meet the demands of trillions of cells? For example, does single myeloid progenitor (refer to the image) produced from one stem cell further divides into several other identical progenitors before further differentiating into specialized cell, so multiple blood cells are created with the involvement of just one stem cell so that work load is shifted from stem cells towards the progenitors? Also, does the fact that RBC lacks nucleus help in producing trillions of them, making the entire process cost effective. 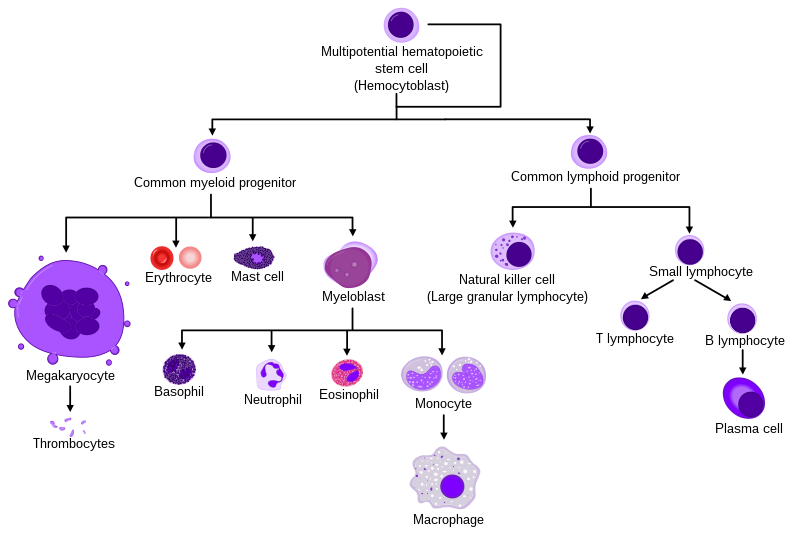 The hematopoietic stem cells are quite rare, and each progenitor cell produced by a stem cell gives rise to a large number of red blood cells (and other blood cell types).

I'm not sure if the precise number of offspring for the earliest progenitor cells is known in vivo, but recent cell culture models indicate that early progenitors can give rise to as many as 70,000 mature red cells. We also know that the erythrocyte burst-forming cell, a later stage cell in the erythroid lineage, gives rise to around 5,000 mature erythrocytes.

Red blood cells eject their nucleus in the final stages of maturation, and cannot divide thereafter. The ejected nucleus is consumed by a bone marrow macrophage, so it cannot be "reused" in any way. Hence, loss of the nucleus is probably not an advantage in terms of "production economy" --- a nucleus must be generated for each single red cell anyway.

3
An over-simplified model of cell division and its relation to stem cells
3
How does Hemocytoblast constantly get formed into so many blood cells and yet remains there in the bone marrow throughout the lifetime?
2
What is the relationship between induction of cell differentiation and DNA methylation status?
0
Difference between stem cell "expansion", "repopulation", and "self-renewal"?
12
How does a (stem) cell keep track of its own 'specialization'?