The concepts of Identity By Descent (IBD) vs Identity By State (IBS) are central in population genetics, yet I fail to fully wrap my head around the definitions.

You can find examples where my understanding of IBD vs IBS is quite poor in @DermotHarnett's answer here or in the comments with @PaulStaab here. @PaulStaab suggests that different authors have used different definitions of IBD and IBS.

What is unclear to me

I suppose that two alleles can be IBD without being IBS in the case where a mutation or recombination event in the middle of the sequence of interest prior (looking backward in time; more recent) to their coalescence. I suppose two alleles can be IBS can not be IBD only if we use an arbitrary threshold that is older than their coalescent time or if convergent/parallel evolution happened.

The issue of IBD and IBS can indeed be confusing.

The identity by state definition refers to the fact that at some point two individuals, even if they are not related to each other, present the same allele at a specific locus. Because of their un-relatedness this similarity probably arose from a similar mutational event.

On the other side, with IBD two individuals happen to share the same allele because of their coancestry.

Now, about the threshold that you were mentioning in your question, I am not entirely sure what you mean. Eventually, all individuals are traceable to a MRCA (most recent common ancestor). So, I think the threshold you talk about refers to the size of the population in analysis. Depending on the size of your population you will have different proportions of alleles that are IBD and IBS.

This won't be a complete explanation: I'm bothered by these questions myself. But I'll say what I do know.

Yes, Identity By Descent (IBD) is defined relative to a chosen threshold number of generations, at least in the sense that I understand it (in case there is more than one sense - I think there are ones allowing for mutation?). At the chosen number of generations back, we assume that all of those ancestors were unrelated. This seems troublesome! But two things might help it seem less so. First: when we ask if two individuals are related or not, we're really asking whether they're more closely related than the average relatedness of the background population. Second: the pedigree method of estimating kinship and inbreeding coefficients, is just that, a way of estimating, which may fail if its assumptions fail (e.g. if the ancestors at the threshold were not randomly chosen from a randomly mating population).

To illustrate, consider a question about a fictional individual with a fictional family tree (spoilers for Game of Thrones, season 1): How inbred is Joffrey Baratheon?

We know that Joffrey Baratheon is not, in fact, the son of King Robert Baratheon, but rather the product of secret incest between his mother Queen Cersei Lannister and her twin brother Jaime Lannister. If that were all we knew about the situation, we would draw the following pedigree:

By using this pedigree, we are implicitly assuming that Cersei and Jaime's parents are unrelated, i.e. randomly chosen from a large randomly mating background population (and assuming that if Cersei and Jaime are more likely than random individuals to share an allele, that this is due solely to IBD from one or the other of those randomly chosen parents, i.e. due to their being close relatives). Based on this assumption, applying the usual method to this pedigree, we estimate Joffrey's coefficient of inbreeding as $0.25$.

However, if we look deeper into the Lannister family tree, we realize that Cersei and Jaime are actually more closely related than a typical brother-sister pair: their parents were not randomly chosen, but were themselves related (though not closely enough to be scandalous for Westerosi society); their father Tywin Lannister, and their mother Joanna Lannister, were cousins. Using this information we draw a more complete pedigree: 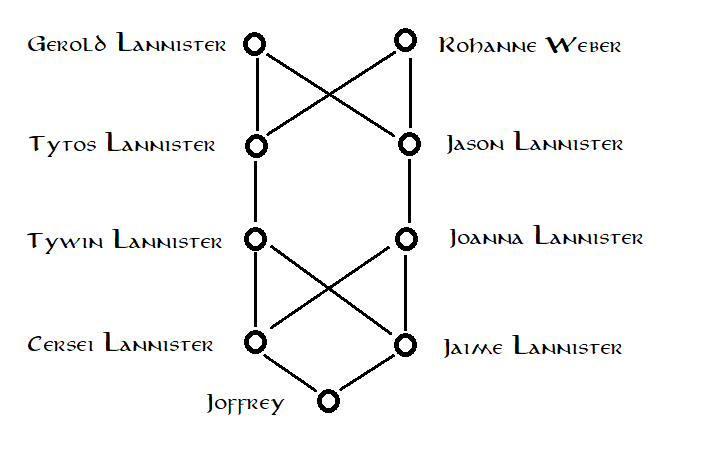 Using the usual pedigree method again, we are now making a different assumption. We are no longer assuming that Joffrey's grandparents Tywin and Joanna were randomly chosen from the background population. We are instead assuming Joffrey's great-great-grandparents, Gerold Lannister and the Lady Rohanne Webber, were randomly chosen from the population. This assumption seems more reasonable. Since this new pedigree implies more inbreeding in Joffrey's ancestry, we guess that the method should give a higher estimate for his inbreeding coefficient: indeed it does, giving us an estimate of $0.28125$.

Although important coeffients like the "inbreeding coefficient" or "coefficient of relationship" are often presented in textbooks as being defined in terms of the probability of some pair of alleles being IBD, this cannot be the actual definition. This is because probabilities can't be negative, but relatedness can be (if two individuals are less related than average), as can the inbreeding coefficient (if the animal is outbred, i.e. its parents had negative relatedness). The possibility of negative relatedness even has interesting evolutionary implications. As a sort of flipside of Hamilton's rule for altruistic kin selection - where it can be evolutionarily beneficial for a gene to cause a bearer to harm oneself, in order to help a relative, i.e. an individual more likely than average to also carry a copy of that gene - negative relatedness makes it possible to have spiteful anti-kin selection - where it pays a gene to cause its bearer to harm itself, for no benefit at all, but solely to harm an individual less likely than average to carry a copy of itself (and more likely to carry its competitors)!

Indeed, in his original formulation of these and related coefficients, Sewall Wright did not invoke probabilities or identity by descent at all. For relatedness he talked about the correlation between individuals' allelic states (this requires assigning numbers to alleles, e.g. $A=1$ and $a=0$). Note that correlation coefficients can be negative. The "probability of IBD" interpretation was introduced by Malécot; it's made it into population genetics textbooks mostly just because it's easier to teach (despite the seemingly paradoxical subjectivity of reference number of generations, and the inconsistency with the possibility of negative relatedness).

Wright's explanation of the inbreeding coefficient is more intuitive: he points out that the most important effect of inbreeding is reduction in heterozygosity. Consider a randomly mating population: an individual randomly chosen from it, will have a certain fraction of its loci heterozygous. But an inbred individual will have fewer loci heterozygous (more loci homozygous). Malécot interpreted that excess homozygosity as being "due to coancestry [since a subjectively chosen reference generation]", but we can ignore that conceptual baggage, and just talk about the excess homozygosity (deficiency in heterozygosity) itself. Thus a better definition of the inbreeding coefficient is

where $H_e$ is the heterozygosity you would expect of the offspring of a random mating given the population's allele frequencies, and $H$ is the inbred individual's actual heterozygosity. A good presentation of this interpretation appears in Hartl's Primer of Population Genetics.

Note that this definition, unlike the probability definition (but like the correlation definition of relatedness) can be negative: outbred individuals have less homozygosity (more heterozygosity) than expected under random mating.

Not the answer you're looking for? Browse other questions tagged evolution theoretical-biology population-genetics molecular-evolution or ask your own question.

10
What is the modern state of the theory of evolution?
1
Examples of extant animals in a submature morphologically unstable evolutionary state?
6
Identity by descent among unrelated individuals
1
IBD-value and IBD-fraction
1
A state model of sodium channels
3
Dominance coefficient
0
How do you derive steady-state conditions from the open-state differential equation of ion channels?
5
Average and lowest degrees of kinship/consanguinity among humans?