I have a confusion in understanding what chiasmata are. My ‘NCERT’ book says ‘The beginning of diplotene is recognised by the dissolution of synaptonemal complex and the tendency of the recombined homologous chromosome of the bivalents to separate from each other except at the site of crossovers. These X shaped structures, are called chiasmata.’

I am not able to imagine what chiasmata look like with this definition ‘... X shaped structures... ’ moreover I am not sure whether this definition is correct for whomsoever I have asked gave me somewhat different definition.

In other words, you can only see chiasmata using a microscope. They are named after the Greek letter named 'chi' which looks like our letter 'X', and are the cytological manifestation of the physical crossover, or crossing over, that took place after meiotic recombination, but before resolution.

Chiasmata are essential for proper segregation on the meiotic spindle because they provide the physical tension, or glue, that the microtubules pull against. If the centromere of each replicated pair attaches to a different spindle pole, then as the microtubules pull, the chromosomes will align in the middle of the spindle. 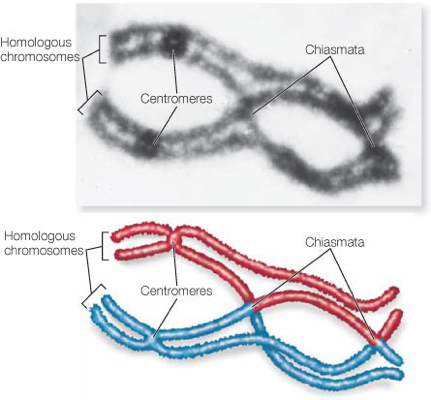 Not the answer you're looking for? Browse other questions tagged meiosis cell-division eukaryotic-cells or ask your own question.

5
What are centromeres *really*?
5
Are HeLa cells edible?
4
Are free-nuclear division and endomitosis the same?
7
How do I identify the different stages of meiosis under microscope?
2
How are germ cells not reduced in number?
0
What confuses me about “homologous gene”