What information do bipolar cells encode?

Actually, the question could be extended to on-centre retinal cells as well, but I'll focus on bipolar cells for now.

On-centre cells will fire when a spot of light hits the centre of their receptive fields and doesn't touch their surround, off-centres are the reverse (light in the centre is inhibitory, surround is excitatory).

Here's an over-simplified illustration that I made, red is hyperpolarized (excited), blue is hypopolarized (inhibited). Let's pretend that horizontal cell effects have already happened, and ignoring overlapping receptive fields for simplicity. 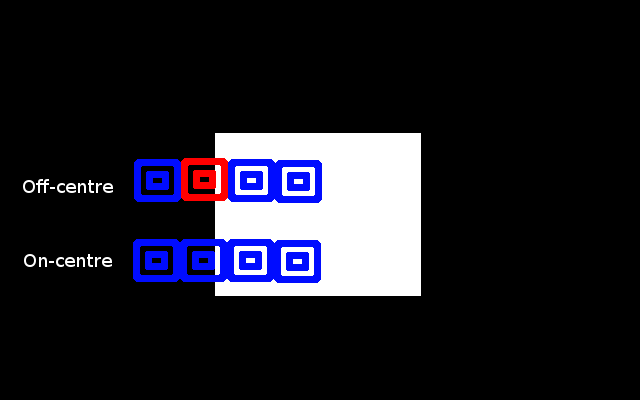 So my question is, if off-centre cells would be useful to highlight contrasts like edges (as I understand it, though eventually edges get detected further down in the complex cells), what are on-centre bipolar cells used for?

From my perspective it looks like they'd be good for single points in light which are small enough to hit the small number of rods that encompass the centre of a receptive field but not hit the surround. But when would this ever be the case? The centre of a receptive field would be incredibly tiny given the large number of rods in say the fovea (though, granted, maybe on-centre cells become more important in the periphery?).

Depending on the polarity of their light response, bipolar cells can be grouped into ON and OFF cells.

Answering your question, what are on bipolar cells used for ? ON bipolar cells predominantly depolarize at light-onset and stratify in the Inner Plexiform layer (ON).

In case with central surround organization, It is one of the classical stimulus study which has been explored further in detail with various complex stimuli. I recommend you to go through The Neuronal Organization of the Retina for more details.

I am absolute beginner in visual neuroscience field. Please correct me if am wrong.

Not the answer you're looking for? Browse other questions tagged cell-biology neuroscience neurophysiology neuroanatomy cell-signaling or ask your own question.

2
Can (any) human cells learn?
3
What determines the shape of the center-surround receptive fields of retinal ganglion cells?
3
What is the connectivity between on-center & off-center bipolar cells?
7
What would happen if some neurons are unmyelinated?
0
Why are the neurites from hair cells to spiral ganglion cells called axons?
3
Visual receptive fields