Spatial dimensions for an animal

The position of an object in head-centered coordinates (that is, relative to an animal's head) can be defined along three axes: the medio-lateral (radial) axis, the rostro-caudal (horizontal) axis and the dorso-central (vertical) axis.

I'm having a little bit of difficulty understanding this coordinate system as the paper doesn't provide a picture. Usually I would think of the three axis as an x-y-z coordinate system where the rat's head is the "origin" (from a mathematical standpoint), but the terminology here seems to be a bit different, so I'd like to understand from a biologist's point-of-view how these three axes are drawn relative from a rat's head.

Wikipedia has a quite didactic article on this: https://en.wikipedia.org/wiki/Anatomical_terms_of_location#Axes

These terms are complementary with a mathematical coordinate system: if you are describing a system of axis for a cylinder, you will need to specify that (e.g.) $z$ is along its symmetry axis, here you will say that $z$ is along the rostro-caudal (or antero-posterior) axis. Also, in biology, axes do not have to be straight lines, see the neuraxis: 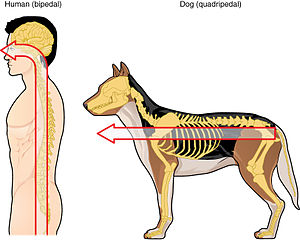 The so called horizontal axis (rosto-caudal) is parallel to the body of the rat. Vertical is just vertical when the rat is in its normal standing position and medio-lateral is horizonral and perpendicular to the rat's body. The head is the origin.

Not the answer you're looking for? Browse other questions tagged zoology terminology morphology or ask your own question.

6
What makes an animal/species suitable for domestication/training?
1
Animal swimming styles
3
What kind of animal can do this?
3
Animal identification (larva)
5
What animal makes these spherical sand clusters?
0
How does an animal having toes create more friction than not?
1
Is there a word for the length of time an animal stays with parents before going off on their own?
34
Why do animal cells “mistake” rubidium ions for potassium ions?