Is “A” inhibiting “B” and vice-versa, a positive feedback loop?

So what is it?

The situation that you presented in which an entity A inhibits the production of another entity B which in turn inhibits A, is a positive feedback.

In a network path or a loop the overall sign of the loop/path is the product of the signs of individual edges (interactions). In this case it is negative times negative which gives a positive sign to the loop.

In simple words, a positive feedback should lead to an entity promoting its own production, directly or indirectly; it can auto-activate itself, activate an activator or inhibit an inhibitor. In this case A inhibits its inhibitor. Sometimes you can have large loops like this: 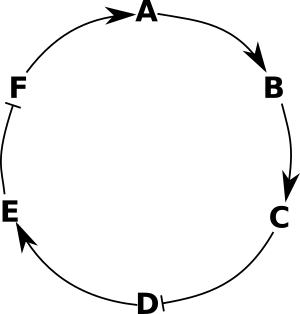 This is still a positive feedback.

Moreover, your case would exhibit (with the right parameters) the dynamic properties of positive feedbacks (such as bistability and hysteresis).

Sometimes people also refer to this type of positive feedback as double-negative feedback (which I personally do not like because it is misleading).

However, not all positive feedbacks lead to runaway amplification. That is a property of an unstable system. The degradation of the molecules (or death) ensures a finite (and stable) steady state. Sometimes (with certain parameter combinations, as previously mentioned) positive feedbacks can have two stable steady states. Depending on the initial condition, the system can settle to either of the states. In your example the two states can be — High-A Low-B and Low-A High-B.

Although the situation you describe involves amplification rather than homeostasis it is not a positive feedback loop under the standard definition of the latter:

In a a positive feedback loop:

The second step is feedback, as it is affecting the initial propagator of the action, and positive, as it causes an increase in that propagator, A as well as target B.

Your model differs from this in two ways. First, only B is amplified — A is suppressed. Second, when A falls to zero B will reach a maximum, whereas in a positive feedback loop things theoretically keep on running out of control. (Yes they generally stop, but that is because of the intervention of something outside the simple A/B system.)

Some biological examples illustrate this difference (please, I am not concerned whether they are true or not).

An example of a positive feedback loop might be atmospheric warming (A) causing production of more water vapour (B) which has a greenhouse effect and increases atmospheric temperature (A), which...

There is a paper in Current Opinions in Cell Biology which discusses the type of motif you describe under the subheading ‘Positive Feedback Loops’, although also refering to them in the text and in the title of a table as ‘double-negative feedback loops’. As @WYSWYG mentions, the review he originaly quoted only uses the latter term, and has a diagram of two-component regulatory motifs, which I reproduce below, distinguishing this from positive feedback. This bears out what I wrote — not that your point of view is necessarily wrong — but that this is a question of semantics, and scientists find it useful to use different terms to distinguish different but related things. In any case, the authors of the review have done the reader a service in defining their terminology. 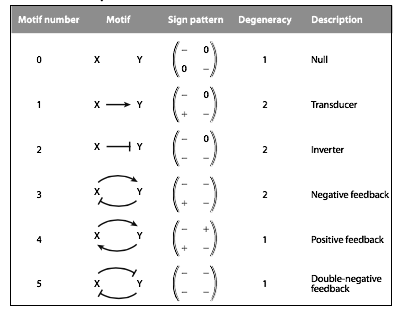 Not the answer you're looking for? Browse other questions tagged molecular-biology theoretical-biology systems-biology or ask your own question.

7
Negative feedback loop and oscillations
1
What do the negative and positive signs mean in the rotation angles of DNA helices?